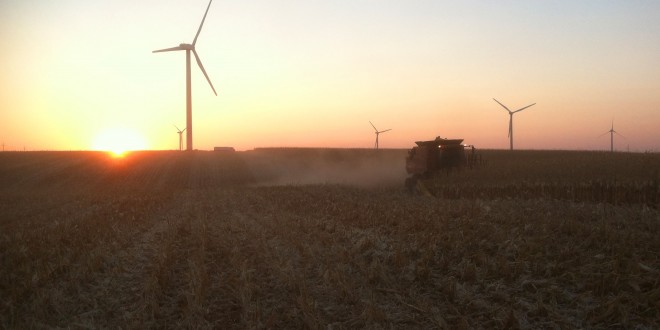 Wind turbines near Kulm, N.D., do their own kind of harvesting as a combine harvests below them. Photo by Jordan Gackle

I have a picture from 2003 that I took in the middle of the day, from the side of the road about 3 miles outside Kulm, N.D. It seems to be a very mundane scene of pasture, but to me it was so breathtaking—I had to pull over. I just can’t get enough of that endless horizon.

The year 2003 was a milestone in my life for a lot of reasons, one being that that summer, I made my first trip to Kulm alone. I’m originally from outside Dallas, Texas, but we have ties to Kulm. My family had visited many times, but this was a trip just for myself, to nourish something in me that only those flat, open spaces could feed. I couldn’t wait to look toward the horizon without any limitation but my own sight failing, to watch a sunset that stretched miles and miles, from one edge of my peripheral vision to the other.

That summer marked the end of that landscape for Kulm. In the fall of 2003, building was complete on the first commercial wind farm in the state.

Those thin, white blades have been a strange thing to grow accustomed to. They look so fragile, like sticks a child could fasten together for a pinwheel. But the pinwheel stretches 328 feet tall at its highest reach, and, when all 41 turbines work together, they can power over 24,700 homes.
Florida Power and Light was the original owner of the farms. FPL is now a parent company of the current owner of the farm, NextEra Energy Resources. Resident Emery Lindgren remembers the community conversation when FPL visited Kulm to discuss the potential wind farm. He said generally the city was proud to host the farm and be part of this pioneering industry. Kulm was approached with the idea by Edgeley, N.D., a town about 15 miles east. They had the foresight to explore bringing a wind farm to the area, but after thorough site investigations, it was determined that the wind resource was much better to the west, in Kulm.

Some Kulm residents were leery of how the farm would affect the skyline. “There aren’t many places left in the world that don’t have the footprint of mankind on them,” Lindgren said. But what finally hooked them was the amount of income for landowners, a large number of initial jobs during construction, eventually becoming six to eight full time positions, and tax money for the local school and community.

The biggest community benefit has been through property tax income. Wind farms and energy plants have a reduced tax rate in order to encourage those types of businesses to locate in North Dakota. However, the amount FPL does pay still adds up to a lot for a town and a school system like Kulm’s.

Last year, the Kulm School District passed a bond initiative to build a new high school. Tom Nitschke, superintendent at the time, found that approximately 15 percent of the new building would be funded by the wind tower payments—”by far, the biggest single payer,” Nitschke said.

FPL also pays the communities for the part they played in bringing the farm to North Dakota. A percentage of income from the farms is sent annually to the cities of Edgeley, Kulm, and neighboring Ellendale. Some of that funding goes to economic development activities.

The final say on whether the farm was built was in the hands of the few landowners. Lowell Berntson has four towers on his land, and he said FPL was great to work with. “It all went so quickly and smoothly,” said Berntson. “Construction was pretty crazy, but as well organized as it could have been. They did a heck of a job.”

The landowners signed a 25-year lease with FPL, with an option to renew. Lease payments are sent annually to individual farmers. Berntson said his one disappointment is that there hasn’t been more development, especially since the company purchased many more leases when the original farm was built, with hopes of expansion.

NextEra said it would love to expand its 11 farms in North Dakota. The state has been very welcoming overall. Currently there is some concern over competition with other energy sources, but as the general trend continues to move toward cleaner energy, more wind farms are likely to follow. NextEra currently has three farms in South Dakota as well, and some legislative changes this year may enable the company to erect more farms there in the future.

Now, when I’m driving back from a long trip toward my home in Kulm, I can see for miles and miles, just the way I like it. All of a sudden, a group of skinny pinwheels comes into view, standing together like a herd of cattle, all facing into the wind. I smile and think,
“I’m almost home,” and head straight for them.

column energy Turbines wind energy 2015-09-15
Sarah Gackle
Share !
Previous: From the Editor: People power
Next: What if engaging youth should be supporting youth?
Scroll To Top