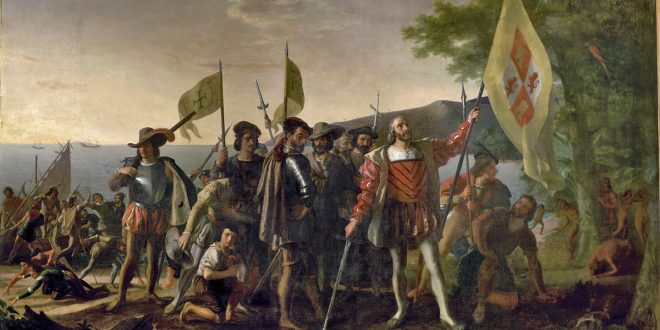 For most Americans, Columbus Day has devolved into a good day to buy appliances, with retailers (and elementary schoolchildren) being about the only ones to do much to celebrate.

But when it was established in 1937, Columbus Day was intended to have a higher purpose—to recognize that the 1492 arrival of Italian explorer Christopher Columbus to what he called the New World “was when the United States, as we know it today, started,” according to Jay Vogt, historic preservation officer for the South Dakota State Historical Society.

For American Indians, the day instead marks the beginning of an invasion that destroyed their way of life.

“The Doctrine of Discovery at that time postulated that you couldn’t claim to have ‘discovered’ land if it was already occupied at the time by other human beings … so (Europeans) declared the Indian people to be ‘non-humans,’” in order to be able to claim they had “discovered” America, according to Vince Two Eagles, member of the Yankton Sioux Tribe, or Ihanktowan Dakota Oyate, from Wagner, S.D.

Two Eagles has tried for years to petition the federal government to do away with the national Columbus Day designation. “I know that’s an uphill battle, but that goes to show you how one side sees the ‘discovery’ of America as a good, positive thing that should be celebrated, and you have the other side—the side that lost.”

In 1990, South Dakota became the first state to recognize the second Monday in October as Native American Day, when the rest of the nation celebrates Columbus Day.

The newer South Dakota holiday is “dedicated to the remembrance of Great Native American leaders who contributed so much to the history of our state,” Vogt said, citing the state law creating the observance. “It was definitely a statement that the Legislature must have been making … that we’re embracing the fact that we have this great American Indian population in this state, and it supersedes, in some ways, three little boats to claim the arrival for Spain.”

While the name change hasn’t changed a whole lot about celebration of that day in American history—particularly because calendars not produced in South Dakota still bear Columbus’s name—Two Eagles said it’s important to focus on the progress that is being made.

“All that does is masks and under-pins the Columbus Day celebration in this country, so we don’t have any serious conversation or dialogue about that issue and how that affects the relationship between not just the Indians in South Dakota, but all over the country,” he said. “What we have to do, I think, is look at the progress being made, and not so much sit and lament about what was (and) negative outcomes, and have a little faith in ourselves and believe in ourselves as human beings—that we want the same things. It basically comes down to—we all want love, and we all want to be loved.”

Similarly, since 2011, North Dakota has celebrated the first Monday of October as First Nations Day, but still celebrates Columbus Day with the rest of the country.

“It’s  great first step,” said Brenna Gerhardt, executive director of the North Dakota Humanities Council, but added that so far it seems to be just a day on the calendar date, not a celebration. “The conversation needs to lead somewhere. … We shouldn’t stop there, and we shouldn’t pat ourselves on the back.”

2016-09-16
Wendy Royston
Share !
Previous: Hoven: The town filled with hope
Next: What happens when histories collide?
Scroll To Top