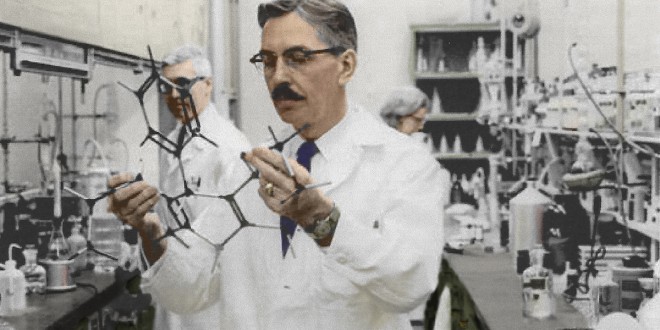 Clark benefits from early investment in one of its youths

By the late 1990s, Dr. Glenn E. Ullyot had gone far from his roots in Clark. He had retired in 1975 with both great renown and wealth after a successful career in the pharmaceutical industry.

But Ullyot had not forgotten his hometown.

He still subscribed to the Clark County Courier, which was delivered to him in Annapolis, Md. When he read about the city’s need for funding to build a new city hall, he donated more than $600,000 to the cause.

“Glenn Ullyot has been very generous in his support of education, the advancement and understanding of science and his support of Clark,” said his nephew, Dan Ullyot, at the dedication ceremony of the new Clark City Hall on June 19, 1999.

From Clark to famous chemist

Glenn Ullyot was born in March 1910 on a farm west of Garden City. The family moved to Clark when Glenn was 2 years old.

Glenn grew up in Clark, working during high school at the Bockhoven drugstore and as a truck driver for a Mr. Cease, who traveled around the country peddling wares to farm wives. A teacher at Clark High School, Florence Winnings, sparked his interest in chemistry.

He graduated from Clark High School in 1927 and received a teaching certificate from the University of South Dakota two years later. After a year of teaching, he decided that was not the career for him. With the help of his brother Lloyd in St. Paul, Minn., Glenn entered the University of Minnesota in St. Paul. His major was chemistry, and he graduated with a Bachelor of Science degree in 1933.

Ullyot was offered a graduate fellowship at the University of Illinois, which he gladly accepted, as the Great Depression made jobs hard to find. He earned his Doctor of Philosophy degree in February 1938.

In 1937, he was the third chemist hired at SmithKline & French Laboratories in Philadelphia, joining some 225 fellow employees. By 1960, Ullyot’s employer had grown, and he had become a renowned member of the American Chemical Society. When he retired in 1975, as director of scientific liaison, there were about 10,000 employees. (Today it is SmithKline Beecham, an English company.)

In 1980, Glenn and his wife, Eleanor, established a Glenn and Eleanor Ullyot scholarship fund for students going into the field of science.  It started with the Clark High School class of 1981 and continues to this day.

Glenn and Barbara Ullyot (his second wife after Eleanor’s death) established significant scholarships at all universities attended by Dr. Ullyot, including $4 million at the University of South Dakota.

The building in Clark honors the community that gave Ullyot his start.

Ullyot dedicated the building, which is and always will be known as “The Ullyot Building” in Clark, to his parents and brothers in appreciation.

The 89-year-old Ullyot had this to say on the day of the dedication in 1999: “I am
grateful for the opportunity and the capability to make a
meaningful contribution to the community of Clark. Many
people had faith in me and helped me along the way.”

He gave much credit to Miss Winnings for his professional accomplishments. He also was grateful to the Bockhoven brothers, for whom he worked for as a teenager, who loaned him money to go to college.

“Most important however, was my family, my mother and father, Bessie and Benjamin, and my brothers, Forrest and Lloyd, in whose loving memory this building is dedicated,” Ullyot said.

Ullyot died in 2002. He ensured that his legacy would not be forgotten.