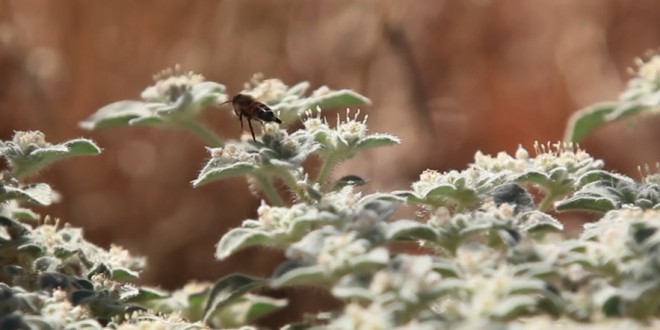 California drought could give lift to Dakota agriculture 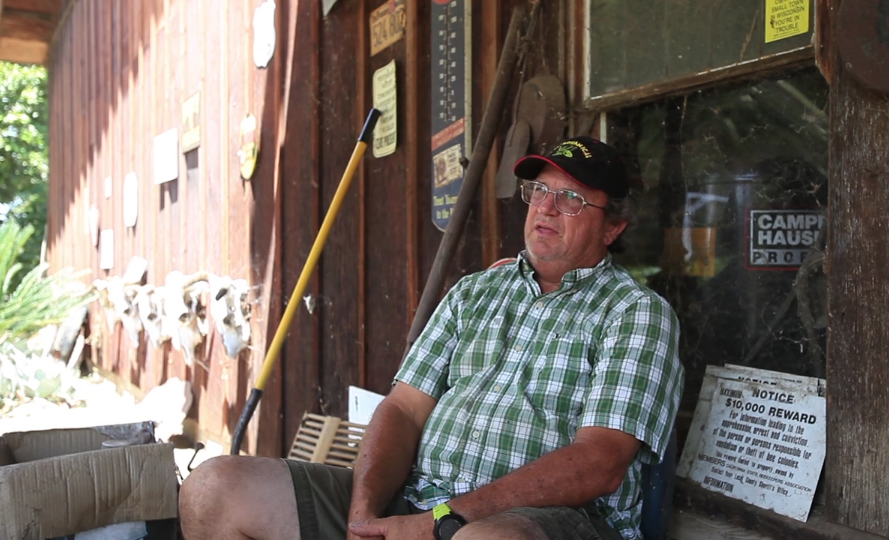 David Bradshaw speaks about the decline in his honeybee numbers during the short film “Saving the Bees” by Brian Dawson. You can watch the video at vimeo.com/112731645. Image used with permission.

Some drought-weary Californians are seeking greener pastures—and at least a few are looking toward the Dakotas.

One of them is beekeeper David Bradshaw, who was featured in a short documentary called Saving the Bees by Brian Dawson.

“It would have to rain in biblical proportions to help California,” Bradshaw says in the film.

The California drought has severely impacted his way of life. Bradshaw’s bees cannot find the forage they need in the wild because the drought is slowly drying up their natural food sources. In 2014, Bradshaw spent more than $110,000 to feed his bees an artificial supplement to keep them alive.

Down to producing only eight barrels of honey last year, after producing hundreds in previous years, Dawson plans to take a new approach: sending his bees to the Midwest. North and South Dakota rank in his top choices for a potential new home.

Dawson’s story is not unique. As the drought continues, ag producers in California are seeing opportunities in other places, including the Dakotas.

North and South Dakota are ready to welcome more producers like Dawson. Dairy farmers, producers of cattle feed, and organic vegetable farmers are some of those groups looking for a silver lining in the Midwest.

California has long benefited from its strong dairy industry. The state has the highest concentration of dairies in the country, and milk and cream are the state’s top-selling agricultural products, according to the USDA.

But as the rain fails to come, the grass and forage that dairy cows depend on withers.

Groups in North and South Dakota, as well as many other states, have attempted to capitalize on California’s drought by advertising the benefits of their states for raising dairy cows. The World Ag Expo in Tulare, Calif., included dairy recruiters from many Midwestern states, as well as Idaho and New Mexico. Jon Davis of Lake Norden, S.D., employed a campaign of several billboards in California, including one with a slogan reading, “No Base, No Quota, Milk Your Cows in South Dakota.”

Despite the enthusiasm of the recruiters, Tim Petry, the extension livestock marketing economist at North Dakota State University, sees major movement of dairy cows as implausible.

California had exactly the same number of dairy cows on Jan. 1, 2015, as it did a year before (1.7 million), Petry said. South Dakota and North Dakota’s dairy cow populations remain significantly smaller, with 98,000 and 16,000 milk cows, respectively.

Moving a dairy can be costly, and adjusting to a new area after years of tradition can seem like a major risk for family-based dairies. Challenges to drawing the California crowd remain.

Petry asserts that the scenario most likely to lead to major movement, unrelated to the drought, is the expansion of urban areas in California leading to flight of business to areas more friendly to agriculture.

Recently, California almond farmers have come under fire for contributing to increased water usage during the historic drought. Yet, according to the California Department for Water Resources, many of the crops that actually require the most water are those grown as fodder for cows.

California and South Dakota both rank in the top five producers of hay throughout the nation from 2004-14, according to the USDA-NASS Annual Crop Report. South Dakota had a 7 percent increase in hay acreage from 2013-14, while California’s levels remained the same. Alfalfa production was at its lowest in California since 1974. Hay stocks dropped 8 percent in California, while they increased 10 percent in North Dakota and 11 percent in South Dakota.

It’s likely that as hay and other feed crops become more difficult to grow in California, prices will increase there, and lower feeding costs could become a benefit to raising cattle in the Dakotas. Farming outside of a drought area would be more sustainable, both economically and environmentally. California operations moving cattle production for the sake of feeding costs is a possibility.

The other possible benefit to North and South Dakota is that California farmers and ranchers will import hay from Midwestern states, rather than paying for expensive food in-state. However, hay is very difficult and costly to transport, Petry says, possibly nullifying any savings.

Despite the uncertainty of success in exporting hay to California, the state continues to bring in feed from the Dakotas. Drought or not, corn feed is in demand in California for livestock besides cows.

California produces half of the world’s fruits and vegetables. As the drought has increased in severity, higher consumer prices for fruits and vegetables were predicted. In June 2014, the California Farm Bureau projected that the average American family would spend $500 more over the year due to the drought. The current projection from USDA’s Consumer Price Index is that fresh fruit prices will rise as much as 3.5 percent, and fresh vegetable prices will rise as much as 3 percent.

There’s not much that Midwestern farmers can do about the price of avocados, but they could help in some areas: they can offer more competitive prices for local consumers on produce such as tomatoes, potatoes, sweet corn, leafy greens, and onions. At least, as long as they have supply to meet the demand. Growing adequate quantities of fruits and vegetables would be just the start: The California system of getting produce to the rest of the country has a lot of infrastructure in place that local farmers would have to build—agreements with buyers, cleaning equipment, a way to transport produce and so on.

All that would take time and money. And it’s a risk to plan on such a big investment when it’s essentially a bet that the rain will continue to stay away from California. (The National Oceanic and Atmospheric Association recently expressed some hope for more precipitation in California this winter.)

Unless, of course, the investment was viewed as a way to diversify agriculture in the Dakotas. Then the California drought could be viewed as just a spark that helped people think differently about what’s possible here—and we could all be thankful when the rain comes.