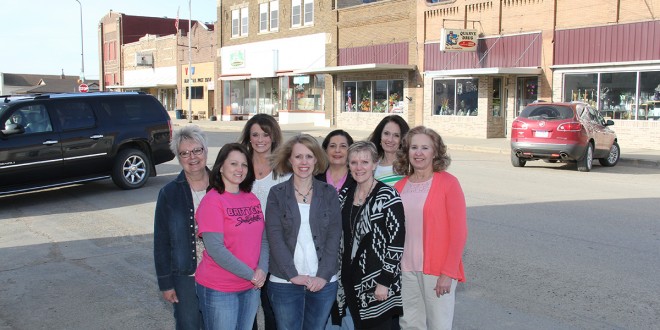 These women business owners are all part of Britton’s Ladies’ Night Out promotion, which attracts shoppers from around the region. Pictured are, from left, front row: Jodi Meyer, Kelsi Heer, Jeani Amacher, and Melinda Nelson; and back row, Paulette Kelsey, Tyra Gefroh, Cyndy Grandpre, and Kelsey Waletich. Photos by Doug Card

Make it fun and they will come.

That’s the mantra adopted by a group of Britton Main Street businesses, and the result has been an event that women from miles around mark on their calendars each year.

Ladies’ Night Out had its beginnings in 2007 when the local chiropractic clinic had a night when it offered massages, facials, and pedicures, and some local businesses donated 20 percent of their sales to raise money for the local American Cancer Society’s Relay for Life.

“They did that for two years, and when they quit we decided that we still needed to do this,” said Kelsey Heer, who operates Dizzy Blondz with her mother, Jeani Amacher.

Dizzy Blondz held the promotion for several years on its own, but as new retail stores opened on Britton’s Main Street, Heer and her mother decided to invite others to the party.

“We got the idea that we should make it a Main Street kind of thing and invited everyone down for a meeting,” said Heer. 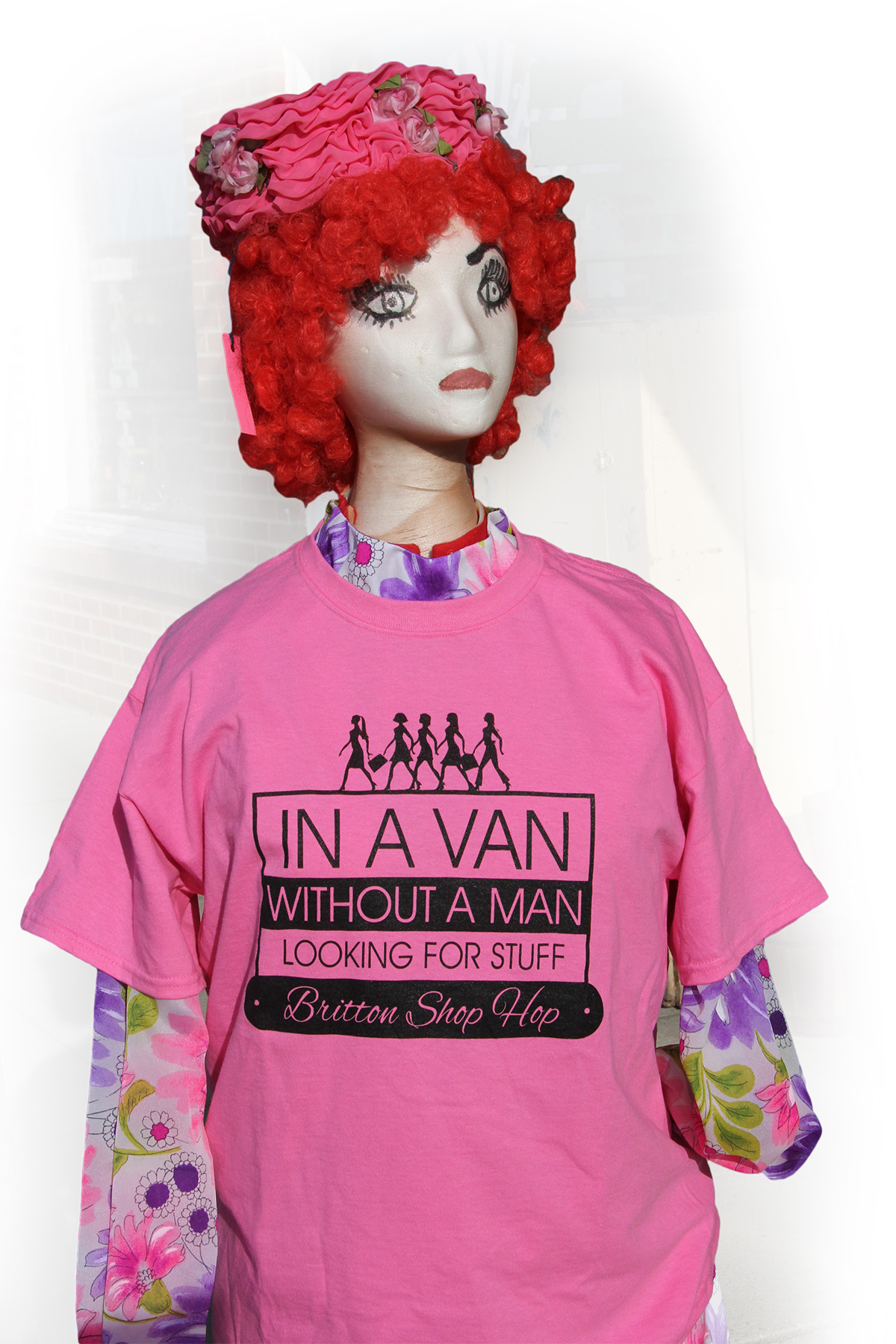 This redhead from Zinnias in Britton is wearing the T-shirt promoting Britton’s Ladies’ Night Out.

Four businesses—Zinnias (antiques), The Painted Past (re-purposed furniture), Flowers & Fudge On Main, and Dizzy Blondz (boutique)—joined forces in the fall of 2013.  Last fall Hardware Hank joined the group, and this summer Tyra Gefroh Photography & Boutique will join as well.

Plans are in full swing for the next event slated for Thursday, June 25.  For most of the stores, Ladies’ Night Out has turned into one of their biggest business days of the year.

“It’s probably my biggest night of the year,” said Kelsey Waletich of The Painted Past. “We think we all offer something that women want and just make it a lot of fun. A lot of people set that time aside and come in groups. It’s something for women to look forward to, and they just make a whole night of it.”

“Everybody does a sale, and everybody does some sort of food and refreshments,” Heer said. “Main Street is just lined with cars, and you see people walking up and down the street laughing and having fun. Everybody is in a good mood, and they don’t even care if they have to wait 20 minutes in line to pay.”

The business owners all work together in promoting the event through advertising, Facebook posts, special T-shirts, and promotion slips in shopping bags. The message on that special T-shirt reads, “In a van, without a man, looking for stuff.”

“We’ve been very enthusiastic with advertising it and done a lot of promoting,” said Paulette Kelsey of Zinnias.  “It’s all about what women like—food and drink and fun and sales.  We have shops that women like, and I think we’ve created kind of a buzz that Britton is a fun place to come to.”

“I think what attracts people from out of town is that we have such unique shops for such a small town and have so much to offer,” said Cyndy Grandpre of Flowers & Fudge On Main. “We all work together on it, and have all come up with input and ideas.”

“We’re so diversified, and everybody has something a little bit different and original—stuff you can’t really find anywhere else,” added Waletich.  “And we all help each other.”

Heer admits she has been a little surprised with how the event has grown.

“We thought when we added everybody that we might just end up with the normal group of customers that would be more spread out. But every store we’ve added brings in a whole new customer base. I never expected it to grow like it has.”

“It’s great advertising,” concluded Heer. “If people have a good experience they go back and tell people about it. Even if they are not back for ladies’ night, they might come back to shop another time.”

communities people PIE Prairie Idea Exchange 2015-06-01
Britton Journal
Share !
Previous: Where is a great Main Street, and what makes it awesome?
Next: Postcard: Growing up in the hotel on the corner of Main
Scroll To Top