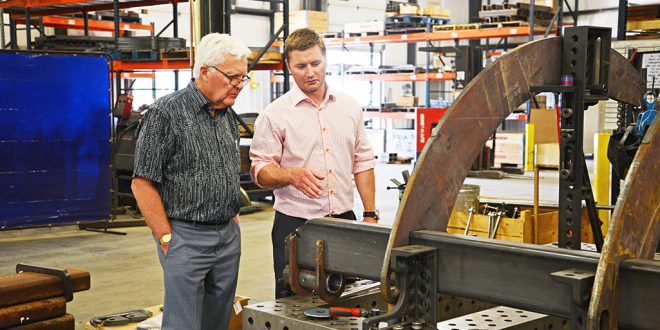 What makes people want to work for a certain company? Pay matters, as does matching employees with work that they have the skill and desire to do. But all that can be in place, and a company may still struggle to recruit and retain the employees it needs.

Some companies in the Dakotas have found that a key factor in maintaining the workforce they need is at the core of their companies: The businesses have strong values and a deep understanding of their purpose in the world that guide and show up in everything they do. Those values are like a magnet for workers who share those beliefs—workers are drawn to those companies, and they tend to stay. Even better, that loyalty propels the businesses to greater success.

Simon Sinek, author of the best-selling books Start With Why and Leaders Eat Last, believes the purpose, or the “why” of a company, is more appealing to workers than, say, free snacks or a pingpong table.

“While those are nice perks, they aren’t things that will create loyal, engaged employees,” Sinek said. “What brings people together, and more importantly keeps them together, is a shared sense of purpose—of realizing that they’re contributing to something that’s bigger than they are. ‘The why’ gives people a sense of purpose and helps them feel that the work they are doing really matters. That feeling is the foundation of a positive workplace culture.”

Living out ‘the why’

“Workplace culture is something you never fully arrive at,” according to Kory Anderson, president & CEO at Anderson Industries, an innovative agricultural manufacturing company with locations in Mapleton, N.D., and Webster, S.D. “It’s a work in progress every day.”

Anderson’s company is not only known for its agricultural products and custom manufacturing, but also for the relationships the company fosters both inside and outside its doors.

Articulating values is just the start of the culture-building process.

Anderson believes in these guiding principles so much that he has made them part of employee reviews. Evaluations include typical checkpoints on performance, but they also appraise how well people align with company values and contribute to the positive workplace.

On a larger scale, Raven Industries takes similar measures to spread its values among 900 employees in the United States—including Sioux Falls—and the Netherlands.

“When people are asked what Raven stands for, it’s our innovation and technology in the products and markets we serve that solve great challenges,” said Stephanie Herseth Sandlin, Raven’s General Counsel & Vice President of Corporate Development.

Raven’s work with precision agriculture addresses the “overarching goal of feeding a hungry planet” that is anticipated to be home to 9.7 billion people by 2050, and Herseth Sandlin stressed “the challenge and the opportunity to do more with less, more yield with fewer inputs.”

Not every company has world-changing projects on deck, but meaning can be found in any industry and in any job title.

“A ‘why’ can inspire at any level of an organization within any industry,” Sinek said. “When we can help someone make the connection between what they do and the ultimate purpose it serves, we completely shift the context within which they work.” 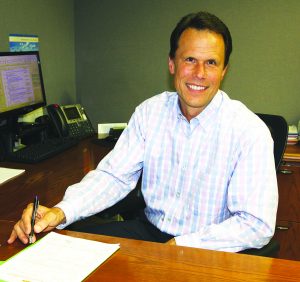 Quite often, the purpose of a company has been defined by the vision and values of its leadership. Those leaders then serve as living examples of those company values.

That’s been the case with longtime CEO Dale Larson at Larson Manufacturing in Brookings, S.D.

“People have always been the driving factor for a successful business formula,” said Jeff Rief, current Larson president and CEO. “Dale created an exceptional business model with a strong moral compass. His philosophy of business is aligned to the core values of integrity, responsibility, compassion and forgiveness.”

The culture based on those values has made it easier for the company to keep employees. More than two-thirds of the 1,500 employees at Larson Manufacturing have been with the company more than 10 years, and nearly 25 percent have been there more than 20 years. The company’s annual turnover rate of 2 percent is well below the industry average of 13 percent.

Dale Larson was profiled in Fred Kiel’s 2015 book, Return on Character: The Real Reason Leaders and Their Companies Win, which found a measurable relationship between CEO character and business success.

Among the 44 U.S.-based companies analyzed by Kiel, Larson emerged as one of the top-rated, with a label of Virtuoso. In contrast to Self-Focused CEOs who are out for themselves and few others, Virtuoso leaders use both head and heart to orchestrate a high-performance team, including board members, top executives, managers and employees, according to Kiel’s book. That team serves all those who have an interest in the company or who are affected by its policies and practices.

“In life and in business, can the good guys win?” asked Maggie Owens, Larson spokesperson, at TEDx Brookings, where she shared the Larson Manufacturing story. Kiel’s research suggests they can. His Virtuoso CEOs achieved an average 9.35 percent return on assets, compared with 1.93 percent for those labeled Self-Focused.

Indeed, financial success is no stranger to Larson Manufacturing; the company has remained profitable for 60 consecutive years and has captured and kept more than 50 percent of the market share in its storm door sector for more than 20 years.

Profit-sharing, paid time off, savings options, health care packages and other traditional benefits play “an important part of the Larson culture, but it is the unexpected signs of appreciation like the milestone celebrations that keep employees talking for years after the event,” Rief said.

For Larson Manufacturing’s 60th anniversary, Dale Larson took all 1,500 team members on a cruise to the Bahamas. In her October TEDx talk, Owens recalled their stop at a marina and the former CEO’s poignant reflection on the importance of his team. Gazing out over the marina full of extravagant yachts, Dale Larson said, “I would rather have 1,500 smiling faces look up at me than one of those yachts,” he told his employees. “You are my yacht.”

The lines are open

The business leaders interviewed for this story stressed that good communication is a vital part of a positive workplace culture.

It can, for example, help companies weather change.

When you communicate appropriately about change, you get team members who feel actively involved and valued,” Herseth Sandlin said. “You can’t take communication for granted.”

“As an innovative company, we’re always looking at change,” Anderson agreed. “Change is only sustainable and successful when everyone involved in the change buys in.”

“We have a rule here that negatives go up and positives go down,’” Anderson said. Essentially, negatives, such as complaints or problems, are communicated “up” the chain of command, to a supervisor who can take action. This prevents decreasing productivity and morale by involving those who cannot directly help the situation. Positives, however, are communicated “down” to every team member in the organization, so they can share in successes.

Klock Werks, a nationally known custom motorcycle shop in Mitchell, S.D., similarly uses communication to share wins, but also relies on it to weave the tightknit, family atmosphere for which their team is known. The team is so closeknit, in fact, they’ve only once advertised for an employee to fill an opening; if team members do move on to another job, they almost always recruit their own replacement because they know someone who will love working there.

“The consistency of the morning meeting provides that opportunity for the team to share in success and celebrate, as well as those moments where people are struggling or frustrated,” said Dave Sietsema, Klock Werks’ general manager.

“Morning meeting” may be 20 to 40 minutes—whatever is needed to share successes, talk through concerns or ask questions—but the team of 15 to 20 always starts the day in the unity of communication with each other and a prayer.

“We’re very much a faith-based company,” says Brian Klock, who founded the company in 1997. Christianity is woven right into the company’s mission statement: “We exist to glorify God as we supply our customers worldwide with superior quality, innovative power-sports products.”

Monday’s morning meeting includes discussion of the weekend’s events, because “sharing the family stuff makes you more empathetic and builds the family culture that is Klock Werks,” according to Klock.

On Wednesdays, they share blessings, and Thursdays are reserved for compliments—they go around the circle and offer a compliment to the team member next to them for a job well done or a thoughtful act. While these conversations may seem unrelated to a company’s financial performance, Klock says the team closeness that is developed leads to greater performance.

“It allows us to compete with companies four or five times our size because … we can move together as a unit.”

The successes of a value-driven workplace start with one step: a clear statement of mission and vision.

“Regardless of the size of a community or business, never underestimate the value of the clarity and sense of purpose that these types of statements provide,” Herseth Sandlin said, recommending that the statements are visible around the workplace and communicated often. “It helps motivate and inspire people day by day.”

Living company values when it counts

by Wendy Royston with additional reporting by Bill Krikac 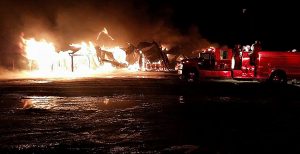 When catastrophe strikes a business, it’s not only the owners who are affected.

“What went through my head was, ‘What are we going to do for the employees?’ How are we going to … take care of people who take care of us?’” recalled Riley Dandurand, vice president and general manager of Dakota Style Foods in Clark, S.D., in a video presented at the Governor’s Economic Development Conference in April. “They’ve got families. They’ve got mouths to feed.”

Eight of the company’s 30 employees work at the chip division, which caught fire in the early morning of Feb. 21. But Dandurand’s concern did not stop there.

“I always think that we’re responsible for over 100, because they all have siblings, they all have children, and in my decisions, I think about that,” he said.

All of the company’s employees showed up the day after the fire, to sift through the rubble.

“We didn’t ask them” to help, Dandurand said. “They just wanted to, because they love that place.” 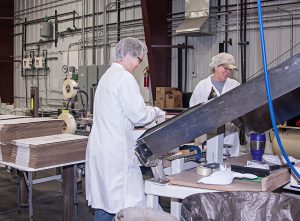 Parts of Dakota Style, like this sunflower seed packaging facility, were unaffected by the fire and are still operating.

In the Midwest, workers often are credited for taking pride in their hard work, done with integrity.

“People say that, but there’s a big difference in doing it. You really see that here,” where classes average around 20 students. “When people are tight-knit, they find a way to get things done, and I think that’s the value of being in this setting.”

From the beginning, Dandurand has voiced his commitment to rebuilding in Clark, where the company has a separate sunflower seed division and corporate offices. The community’s development corporation recruited the business to town after Dandurand’s father, Kevin Dandurand, purchased it from a potato-farming couple who started the business in 1985.

“We are going to get up and going as quick as possible,” he told the Clark County Courier after the fire. “We love being in Clark and we will continue and expand here.”

In the video, he confirmed the plan, reflecting on the fire with optimism.

“What exact form and what it will be, I do not know, but there will be positive things that come from this negative.”  ⎨