What are some ways regional collaboration works? 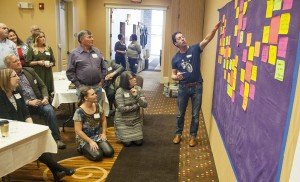 Regional collaborations are already happening around a variety of community needs in the Dakotas.

So what do all those successful efforts have in common? The Prairie Idea Exchange participants discussed some of the characteristics of regional efforts that have some staying power.

“Mutual interest brings people together,” said Linda Salmonson, manager of Rural Electric Economic Development. “If you’ve got an identified project that has regional impact and regional potential, that gives you a topic to start the discussion.”

And from that first project, other things can develop, once the relationships have been developed. But the process starts with a topic of mutual interest, because that’s what gets people to the table in the first place.

Having a common goal also creates an amplifier effect for the common work.

“Regionalism works when you’re working on one concept … because you’re creating a regional drum for that particular concept,” said Liz Hannum, coordinator of the Center of Excellence in Entrepreneurship and International Business at Northern State University. “It’s multiple voices saying the same thing, versus one voice saying the same thing over and over again.”

Rick Skorupski, a writer from Frankfort, S.D., said one topic that could bring most of the region together is pheasants.

“Pheasant hunters bring … millions of dollars into our regions, and we—though we might be working separately—are working regionally to accommodate those hunters,” Skorupski said.

“Leadership is a key driver,” said Todd Kays, executive director of the First District Association of Local Governments. “It takes a group of individuals, it seems, to really have a drive of some sort to work together and reach out and use their resources and their networks … to pull together those ideas and make it actually come to a reality.”

Another word that the PIE participants used was finding the “champions” for a project—the people who not only do the work but get the rest of the people to the table.

“The most important thing is just showing up,” Kays said. “You have to have people there to buy into the relationship and then be able to say how much risk we are going to assume together.”

That kind of buy-in requires several things: First, the people in the group have to be convinced that the plan is a good one and that success is a likely possibility. Second, there has to be some sort of relationship between the people around the table. No one wants to assume risk with others whom they don’t know and trust. That relationship needs to be strong enough that people are willing to make at least a small sacrifice for their immediate needs to make the region better in the long run. Kays called this “dying to yourself to make everybody else stronger.”

Wanda Jundt, executive director of the Eureka (S.D.) Community Development Company, said that she had enjoyed working with a regional newspaper journalist who went out of his way to make sure Eureka’s news was reported and, therefore, shared with the region.

“I think that news media is really important as far as collaboration,” Jundt said. “It’s a way for us to reach out … and keep everybody abreast of what’s happening in each community.”

A collaboration that shares resources makes itself worthwhile to its participants, and that makes the collaboration stronger and more likely to last.

One example of shared resources is shared staff. Some small communities could not afford to hire their own economic developers, for example, but they can benefit nearly as much by sharing in the cost of one employee that serves multiple communities.

Another resource that can be shared is expertise. Some people in the region are known for their expertise on housing, for example; by asking for advice from those experts, others in the region don’t need to start from square one in their own housing knowledge.

One last example of shared resources is the website structure that has been developed in common for economic development organizations in northeastern South Dakota called the Prairie Gateway. Because each of the sites has a common structure that cost less to develop and now allows them to easily share content, as well as an “umbrella site” that can direct traffic to all the others, the overall cost was less and the impact was higher than if each of the organizations had tried to develop their own sites separately.

Being able to connect and share information is clearly a benefit for regional collaborations. Kelly Weaver of the Small Business Center in Aberdeen said having a regular time for networking helps to keep those regional relationships going.

“Events like (the Prairie Idea Exchange) and the regional roundtable that we had this morning are a way for people to have a way to build their network and a regular invitation to be a part of it,” Weaver said. “It’s not like you always have to pick up the phone. You can just go to this meeting and interact with different people and … build your network that way.”

One final piece of advice was offered by Norb Barrie of Turton, S.D.: “Take advantage of serendipity moments.” In other words, if you see a regional effort coming together naturally, do what you can to help it come into being. 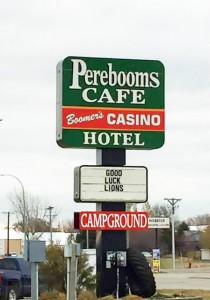 Discussions of regional efforts sometimes have this idea hovering the background: “Yes, collaborating sounds like a good idea—except working with that town. We’ve been rivals for generations.”

That’s one of the stumbling blocks that communities need to overcome for a good regional effort to take hold, experts say.

“Whether you just beat that next town over in basketball or not, you really should work together in regard to what it looks like economically,” and consider how small, rural communities can be even better and stronger as a region, said Christine Sorensen, Midwest regional community economic development coordinator of the U. S. Department of Agriculture-Rural Development.

Perhaps something like this is a way to start: When the Langford Lions football team advanced to compete for the state title in November, the folks in charge of the display at Perebooms Cafe in Webster decided to give the Lions fans some encouragement as they passed by on their way to the DakotaDome.

Sure, it’s still good to have some healthy competition on the field or the court. But it’s also good to know when—and how—to put it aside.

collaboration PIE Prairie Idea Exchange Whats Possible 2016-01-09
Heidi Marttila-Losure
Share !
Previous: From the Editor: Success depends on ‘where the heart is’
Next: From the Editor: Building confidence
Scroll To Top