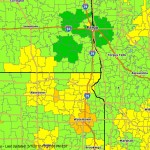 The answer to that question is not as intuitive as you might think. (Also check out a regional map of gas prices.) END_OF_DOCUMENT_TOKEN_TO_BE_REPLACED

Whatever you think of the Keystone XL pipeline, you may want to take note of who stopped it. It was not, as reported in The New Yorker, Professor Bill McKibben and other East Coast activists. Instead, the power behind the brakes originated on ranches in Nebraska. NPR reported the story, and Daily Yonder gave their take on it: (NPR reporters ... END_OF_DOCUMENT_TOKEN_TO_BE_REPLACED