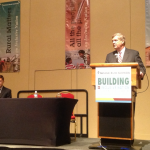 After raising the issue of the relevancy of rural places to the national political conversation last December, U.S. Agriculture Secretary Tom Vilsack took a step beyond that Tuesday as he addressed the National Rural Assembly: Why aren’t rural advocates outraged when rural places are dismissed as irrelevant? END_OF_DOCUMENT_TOKEN_TO_BE_REPLACED