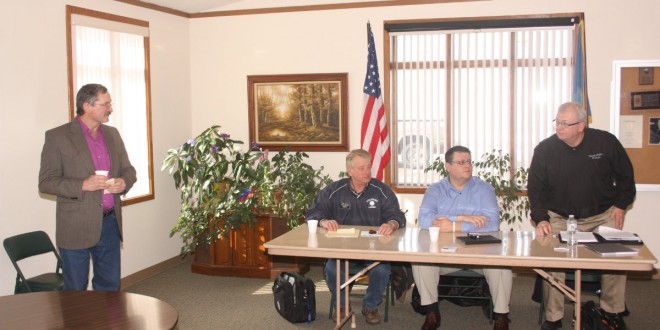 Drainage was one of the main topics discussed at the recent Clark Area 2013 Legislative Cracker Barrel, held February 18 at the Ullyot Building.

Rep. Brock Greenfield brought up HB 1135, a bill dealing with drainage and public/private flooding. “I spent 10 hours researching, planning testimony and after three amendments it passed with 37 votes in the House and now goes to the Senate,” he said.

Water access and drainage discussion monopolized much of the Cracker Barrel with several proposed bills talked about including SB 179, a bill to create a uniform County Drainage Permit Application Form.

Rep. Burt Tulson talked about hunting and fishing on flooded land. “The way law reads now, if someone is fishing and the bait hits bottom, it’s trespassing. If land isn’t posted, it’s open for fishing,” he said.

These legislators, along with Sen. Chuck Welke who was also in attendance, felt that this drainage/flooded land issue is very emotional, but the legislature is doing a great service by bringing this discussion to the forefront.

Another main topic of discussion was the school sentinel bill, HB 1087. HB 1087 proposes armed “sentinels” at schools in the state, if the local boards so choose. The bill has passed the House and now has gone to the Senate.

“I don’t think most school people are in favor of this,” said Sen. Welke, a retired educator. “It would be up to the local boards.”

The pros and cons of a sentinel were then discussed. “I understand superintendents are looking for safe and secure schools, but it looks like a solution looking for a problem,” said Rep. Tulson.

Rep. Greenfield added, “Nobody assumes a situation like Newtown would ever happen. This bill was brought because of these (school shootings) happenings. If we can save only one life, it’s worth it. Do we put people in jeopardy? There is other value to this bill, and school boards will have discussion in executive session.”

Welke added that in our rural settings in South Dakota, law enforcement are visible and maybe deputies and all law enforcement could make periodical, unscheduled school stops.

Economic development was discussed as well.

All three legislators appreciated the turnout for the meeting.

Rep. Greenfield closed, “There are approximately 500 bills in the hopper this session. We are doing what we feel is in the best interest of all South Dakotans. Thank you for your input!”