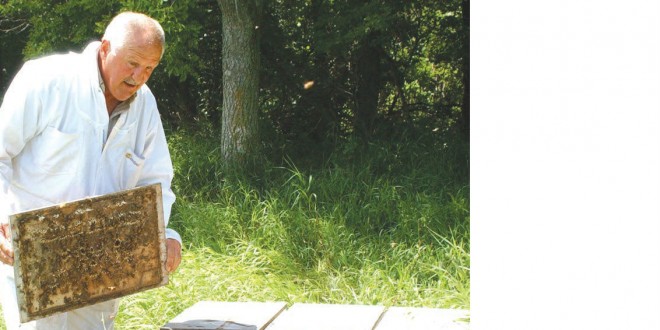 Waubay apiarist as busy as his bees

by George Thompson, Reporter and Farmer

When he isn’t keeping busy as a county commissioner or working with his construction equipment, Waubay resident Gary Block is the travel agent for a semiload of “busy bees” who pollinate crops all over the country on a year-round basis.

Block has been in the business both as a hobbyist and as a commercial beekeeper for 30-plus years.

Today he’s somewhere in between. The classic lines by actor Al Pacino in the movie The Godfather, “Just when I thought I was out, they pulled me back in” might best describe Block’s ongoing affair with beekeeping.

“I had an uncle who had bees,” he explained last week from the front porch of his Bitter Lake home, “but I really got started through an employee. I was splicing cable out by Philip. This guy had bees and we were always talking about them and that’s when I decided to get a hive.”

That was the mid 1970s. By late 1982 Block went commercial. His business, G-Bees, has locations in Waubay and Naples, TX.

“When I went into the business the real money was in the pollination, not the honey,” he said. “Now days the price of honey is a lot higher than it was, and you can make money there too. We do both now.”

Block’s hives spend part of the summer in South Dakota where the bees mostly collect honey. In the fall they’re trucked to Arkansas or Texas to winter.

In late January-early February the bees are moved to California where they pollinate almond trees until mid March, then it’s back to Texas for more preparation and sorting.

G-Bees has pulled jobs from as far away as Maine where they pollinate commercially grown wild blueberries in late May and June. The bees see duty in the cranberry bogs late June to July near the Wisconsin Dells before returning home to South Dakota to start the annual cycle all over.

Block eventually sold his bees to a beekeeper in Arkansas, but was drawn back into the business three years ago when he bought some bees from his brother, who is also a beekeeper.

“I am playing on the fringe now,” he grinned, saying he has a limited customer list and his bees stay on his own property when they’re back in the state.

According to a Cornell University study, honey bee pollination adds $10.7 billion to the value of the crops they pollinate.

G-Bees are much like cattle. They’re crossbred for performance and they’re pretty much left on their own when put out to pasture.

“I check them whenever we move to a new location and make sure they’re properly fed,” Block said. “The light colored bees (Italian) are very industrious, but they can eat themselves out of a home, and you don’t want that. The dark bees are more conservative and more disease resistant.”

That explains why hybrids are so popular with commercial keepers.

Several years ago a strain of Russian bees was introduced because they are resistant to mite infestations that often cause premature bee mortality. The mites punch a hole in the bee’s skin making it vulnerable to infection.

Beekeepers have also been battling with colony collapse disorder (CCD), an undiagnosed malady which can eliminate up to 80 percent of our hives over the course of the year.

“No one has really figured out what causes this,” Block explained. “I can’t help but wonder if it’s a combination of things, like mites, disease and exposure to pesticides or other harmful farm chemicals.”

Interestingly, commercial bee pollinators are paid by the hive and the strength of the hive (numbers). Also, beekeepers charge different rates for different crops. He said pollinating almonds in California is one of the most lucrative contracts a producer can have. It takes about 540 hives, a semiload, to be able to make a decent living. That’s why most people raise bees as a sideline.

According to the state Department of Ag figures, there are 185 beekeepers in the state with around 100 of them commercial operators. The total number of colonies (hives) usually ranks in the top five in the country. The state was third in 2011 with 250,000 colonies behind only North Dakota and California. The state’s soils, topography and climate generally provide the essential natural ingredients for the production of good crops of high quality honey but those results vary with the weather.

Block says there are many different types of honey, but the most desirable, mild flavored and light colored, comes from an alfalfa-sweet clover blend. In 2011, South Dakota ranked second in honey production with 16.5 million pounds which was up seven percent from the year before.

Block said honey often takes on a taste and/or a fragrance from the crop it comes from. He said mint is a perfect example. “You can really taste it,” he said, noting that most honey is a blend of nectar from various crops.

He said beekeepers are no different than the rest of the farming in that a late spring this year has put them behind schedule. “We started out about three weeks behind schedule,” he related, “but we’re only about a week behind now. Nature has a way of evening things out.”

Block sees a bright future for the industry especially with an ever increasing demand for commercial pollinators and honey prices on the rise. “The industry is opening up now that there’s better money in it. Honey is really becoming a byproduct,” he concluded.