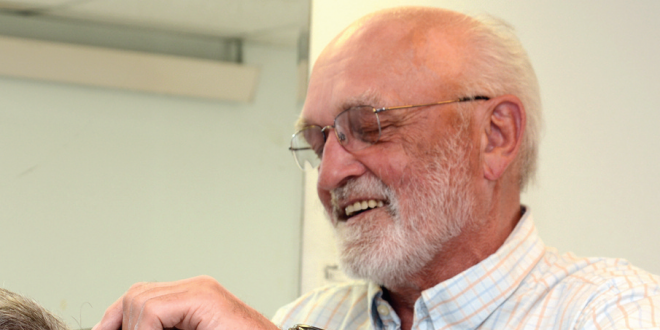 Coming Home: Bristol’s Lesnar among last of the barbers

When Pete Lesnar joined the military in 1960, he had intended to make a career of it, but said that was before he knew how negatively the general public was going to react to soldiers coming home from war.

“I didn’t know the American people didn’t like us,” he confessed. “It didn’t make no difference where you served; they just hated you with a passion…they called us baby killers and worse. They just didn’t like soldiers or any servicemen.”

Lesnar was born in Waubay but grew up on a farm near Grenville. He attended country school and started high school in Grenville, but when the Grenville school burned down, he was enrolled in a high school in Wisconsin. He had a brother who had gone to school there, he explained. He graduated in 1960.

Later that fall, he joined the Army. He said he concealed the fact that he was a serviceman for many years.

“You didn’t even tell people you were in (the service),” he said. “You kept it a secret.”

Lesnar was stationed in Germany and worked as a communications specialist.

“It was my job to decrypt messages and send them all over the world,” he said.

When Lesnar got out of the service in 1963, he enrolled in a barber school at Fargo, ND. He said he wanted to become a barber because cutting hair was the one thing he knew.

“I just knew how to cut hair and I did it a bit in the service,” he said.

Following his graduation from barber school, Lesnar moved to Webster for a couple of years, until he decided to get his master’s degree. From there, he moved to Mobridge and went to work for a master barber to learn more of the trade from the mid-1960s to the late 1970s. Eventually, Lesnar says, he moved to Bristol where he bought a barbershop and started cutting hair on his own. Today, Lesnar is owner of Pete’s Barber Shop in Bristol.

To maintain a barber’s license, Lesnar says he’s had to get recertified every few years. He said barbers have to stay up-to-date on their knowledge of muscle structure and disease, to name a few.

“It’s so you don’t contaminate anyone else,” he commented.

He said he likes to think about barbers being, “the first doctors in the world.”

Today he says, “The barber business is a dying thing. The beauticians are taking over.”

He believes barbers will be done for when his generation is gone.

“It’s more of a convenience for people who live here,” he commented.

Most of his patrons were customers when he first bought the shop.

“You get to know what they want,” Lesnar said.

When Lesnar first bought the barber shop, he said he was only charging a dollar.

“It’s been climbing ever since,” he said with a laugh.

While he was living outside of the area, Lesnar said, “I really missed the hunting and fishing. Nowhere else has as good of fishing as over here.”

At the same time, Lesnar says he wouldn’t mind if the Missouri River was a little closer because there’s more area to cover on the river.

“(On the Missouri) you could go all the way to the North Dakota border. And you could go as far south as you wanted until you ran into a dam somewhere.

Lesnar has three children, six grandchildren and one great-grandchild.