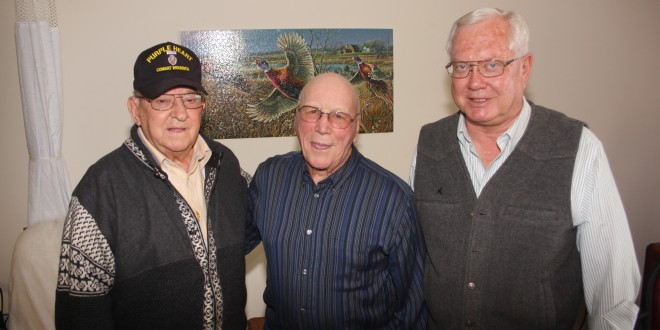 Carroll Peterson, left, of Webster, and John Audus, middle, of Clark, were in the same company in World War II, unbeknownst to each other. Marlin Fjelland, right, of Clark, found out about them both being on the same plane for a short while on Christmas Day 1944. Fjelland helped the two get acquainted and reminisce about this fateful trip home. Photo by Clark County Courier

Carroll Peterson, left, of Webster, and John Audus, middle, of Clark, were in the same company in World War II, unbeknownst to each other. Marlin Fjelland, right, of Clark, found out about them both being on the same plane for a short while on Christmas Day 1944. Fjelland helped the two get acquainted and reminisce about this fateful trip home. Photo by Clark County Courier

From the Christmas Day edition, 1944, of the Harrisburg (Pa.) Inquirer: “A huge army plane, lost in murky weather three miles from the Harrisburg Airport, crashed in a heavily wooded section at 4:27 a.m. today, killing 10 South Dakota soldiers and injuring 17 others.”

Sixty-eight years after the fact of this horrific Army plane crash, the story gets another life, a Paul Harvey “rest of the story” with a northeast South Dakota connection. Two Army privates, who were in the same company and grew up 20 miles away from each other in northeast South Dakota, found out they have this memorable trip in common.

The two recent Army inductees were stationed at Camp Blanding in December 1944, south of Jacksonville, Fla., and were preparing for their Christmas furlough before heading to Europe and combat duty in World War II. The pair were finishing basic training with Company B -21st Infantry Battalion. It was the biggest military training base in America at the time with 90,000 soldiers.

It doesn’t take a geographical Einstein to figure out that Harrisburg, Pa., is not on the path from Jacksonville, Fla., to Minneapolis and to this day the plane’s location as it crashed is a baffler.

One soldier in our story was on this plane and survived, spending all of 1945 in the hospital. The other wasn’t allowed on the plane; he was kicked off, after trying to be a stowaway, made it home for Christmas and spent 1945 in Europe, in part helping to liberate the Buchenwald Concentration Camp at Weimar, Germany.

John Audus, who grew up south of Bradley and farmed there his entire life, was on the plane that crashed near Harrisburg.

According to the Inquirer story: “The plane, apparently seeking a landing field in the ceiling zero weather, was flying so low that it struck the side of the ridge known as Round Top, five miles southeast of this city.”

Carroll Peterson, who grew up south of Lily and worked 40 years for the highway department in Webster as an engineering technician for the South Dakota Highway Department, was the soldier who wasn’t allowed on that cargo plane on Christmas Day 1944.

“There were four of us from Webster wanting to come home for Christmas together,” Peterson said. “This plane was to go to Minneapolis, and that would mean that I would get to Webster five hours sooner than the plane I was scheduled for that was to land in Bismarck, N.D. I remember we were waiting a long, long time for the fog to lift, and when the captain took the roster, I was the odd man out. He told me to get off the plane and there was a spot for me on the one going to Bismarck.”

All 10 who perished in the Minneapolis-bound plane were seated in the front; Peterson’s seat would also have been in the front.

“I would have died had I stayed on that plane,” Peterson said.

The three Webster Army men were banged up pretty good, but all survived.

Audus has had life-long repercussions from this plane crash, but at age 87, Audus really enjoyed reminiscing with Peterson about Christmas break 1944 and their war experiences.

The Clark County Courier ran Audus’ story of this Christmas Day 1944 plane crash in the Jan. 28, 2004, edition. The story told in detail what happened, according to the Harrisburg Inquirer recount.

Audus’ memories of the crash include: “I got air sick very easily, so I was in the back of the plane. They had air sick bags in the back, so that is why I was positioned there. I only knew one other person on the plane, and he was killed. The plane was over 100 feet in the air when it crashed. I think we were out of gas, and I think we were just flying on fumes, or everybody would have been burned.”

Audus was burned on his right ear and down that side of his neck, and he suffered a broken left femur, halfway between the hip and the knee. Had this accident not occurred, Audus’ battalion was scheduled for the Battle of the Bulge.

“I didn’t even remember being in the airplane when I came to in the hospital after the crash,” he said.

Audus was in a civilian Harrisburg hospital for 10 days before he was shipped to the Valley Forge General Hospital where he had plastic surgery on the back part of his ear. He spent a year in the hospital.

What Audus can’t understand is that the plane landed three times and went back up three times before the crash occurred, “so we must have been lost,” he said.

So how did the pair find out they had this memorable day in common?

That’s where Marlin Fjelland comes in. Clark-area residents know that Fjelland dabbles in farming/ranching and is an auctioneer, but not all that many know that he is a social worker (recently retired) in Webster and Aberdeen.

Through Fjelland’s Veterans Administration work, he visited with Peterson. When Peterson told of this plane accident, the light bulb went off in Fjelland’s brain and he knew he had to get the two together. Fjelland says the tragedy of war accompanied by the sacrifices the soldiers and all who served made are making today, deserve the deepest respect from us as Americans who enjoy our freedoms.

Among other late pieces of the war puzzle, Peterson was given a special ceremony in 2008 and awarded the Purple Heart for shrapnel wounds he received in a battle in Germany in 1945.

Fjelland recently got the two together after 68 years. They met for the first time. “It’s a wonder we’re both alive,” Peterson said.