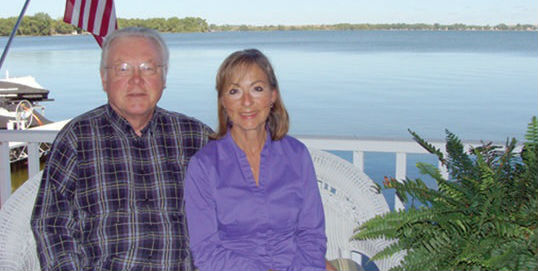 By Webster Reporter and Farmer October 2, 2013

Following their passion for music, Paul and Diana Moxness led teaching careers all over the Midwest. Through that outlet, they were able to travel to various parts of the country as well as the world. But when it came time to retire, they could think of nowhere they would rather retire than Day County.

Paul was born in 1947 to Sophus and Jeanett Moxness of Bristol. He graduated Bristol High School in 1966. His interest in a musical career began in fifth grade when he joined the school band. He was in All-State Band all four years of high school.

“I was encouraged through teachers and others to pursue music,” he said. “That’s what I felt I was best at.”

Diana was born in 1948 to Wilmer and Rosina Stiegelmeier in Selby. She graduated from Selby High School in 1966. She took vocal lessons starting at age 16 and played the French horn. Her family was also musically inclined.

“Everybody sang all the time when I was growing up,” she said. “If we took a road trip, we were singing.”

Diana had gone on a European tour with the International Peace Garden Music Camp in high school. She was also chosen to perform in a tour of the East Coast with the United States High School Band and Choir.

“Those experiences really influenced my musical growth and development,” she said.

The two met at Northern State University in Aberdeen when they were auditioning for music scholarships. Each completed majors in music education in the spring of 1970; they were married that July.

After that, they left Aberdeen while Paul continued musical study and obtained a Master’s Degree in saxaphone performance at Northwestern University near Chicago. Diana began teaching in an Illinois school district.

Within a year, they had the opportunity to return to South Dakota and teach at Eureka. They both had jobs at the school there, teaching all grade levels.

In 1975 they moved to Mitchell where Paul taught four years in the public schools and Diana taught part time at Dakota Wesleyan University. In 1979, Paul was asked to apply as a sabbatical replacement at Northern State for a year.

They decided to go back to grad school in 1980 and completed their doctorates of musical arts degrees at the University of Iowa.

In 1985, Diana accepted a position in the Department of Music at Minnesota State University. When she was hired, there was no position available for Paul so he taught at Morningside College in Sioux City, IA, for four years. He would commute back and forth on weekends.

In 1989, Paul took a position back at Northern State University, teaching in the music department. He still commuted back and forth on weekends.

During that time, Enemy Swim Lake became a rendezvous point for the two since Paul’s family owned property there.

“I practically grew up on the lake,” he said. “All the summers I grew up, we would be on the lake.”

Diana has been going to the lake since 1968, after she and Paul were dating.

Finally, in 1994, Paul got a teaching position at Bethany Lutheran College and eventually at Mankato State University close to Diana.

“We were actually together in one place then,” Paul said with a laugh.

When they retired in 2011, Diana had put in 26 years at Mankato and Paul had taught there 15 years.

In 2011, a friend was selling their property on Enemy Swim, so Paul and Diana decided to buy it.

Since his brother, sister and a cousin also have property there, they liked the idea of being close to family.

“Plus there are a lot of lifelong friends in the area,” Paul said. “We’re living and enjoying now what we used to enjoy doing for fun. It’s kind of like deja vu.”

Because they were coming to the lake to visit often, Diana said, “It didn’t ever really feel like we’d left it.”

During the winter months, Paul and Diana travel to California.

“But we always look forward to coming back,” Paul said.

While at Enemy Swim, they enjoy taking their sailboat out.

“We’ll go out in the later afternoon, evenings, and enjoy the quiet of the area,” Paul commented.

They have a garden and just like being able to enjoy the outdoors together.

For Diana, she considers living here as the best of both worlds. With family in Selby, Bismarck, ND, and Minneapolis, MN, Day County is right in the middle.

Paul says, “We’ve lived near Chicago, near Minneapolis and by comparison, this area in South Dakota does a great job of providing opportunities for people,” Paul said. “Sometimes we forget the opportunities we have in this area. The Coteau Hills really have some interesting things.”

One difference they’ve noticed about living here versus other places is, “The pace of life is a bit different, but it’s busy out here too,” Paul said.

Although they are enjoying retirement, taking time to do some traveling, they say they missed teaching. So they started working part time at Enemy Swim Day School, working with the after-school program. They both say they’re enjoying learning about the native Dakota culture through that experience.

“Both of us grew up around that culture, but we didn’t participate,” Diana said. “It’s been very enlightening and gratifying.”

They also keep active in music by performing in the area. On Sept. 22 they were at Bethesda Lutheran Church performing for the church’s 125th kickoff.

“We love it here,” Diana said. “we enjoy our neighbors and friends, the lake…and the breath of fresh air.”