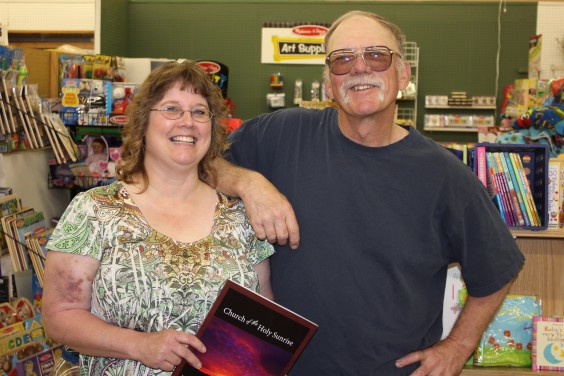 by Garrick Moritz
Local poet Bruce Roseland has produced at third book, this time in collaboration with local art photographer Susan Melius. The book is called, Church of the Holy Sunrise.

“Susan and I did some thinking about the title for this one,” said Roseland. “We were looking for something that we all hold in common, something everyone who lives in rural South Dakota shares that is sacred in some way. Many of us, Susan and I and most of the people we know, are always up early in the morning and get to see that sunrise, and for many of us, watching it is a lot like going to church.”

“I’ve literally taken thousands of pictures of the sunrises and sunsets here on the prairie,” said Melius, “and I never get tired of it. Each one is unique. In my photographs I try to find the beauty that happens every day, beauty that we often take for granted, and capture it with my camera.”

“The only difficulty then was finding a photographer to collaborate with, and in the end that proved to be pretty easy,” he said. “I wanted to work with somebody local, and someone suggested I talk to Susan Melius. As it turned out, she had already read my previous books, liked them and already had several ideas.”

“So we started right away matching photos to poems both old and new. Some she was able to match with photos she’d taken, and others we went out and took to match the poem. In some cases I wrote a poem to go with a photograph of hers that I really liked.”

Unlike his previous books, Roseland and Melius decided to completely self publish. In a process that took more than a year and a half, they created the book exactly how they wanted it themselves.

“I’ve got to give Susan a lot of the credit,” said Roseland. “She learned how do to do everything on the computer that we needed to make this work.”

Using a combination of Adobe Photoshop and InDesign, Melius built their book step by step. “I’ve been taking pictures forever,” said Melius, “and that part was easy. But the design and layout, well it took a lot of work. I got a crash course in computer pagination. There was a lot of trial and error, playing with it and finding out what worked and what didn’t. When I first bought the programs and looked at the manuals I was pretty intimidated. I called Bruce and worried aloud that I might be in over my head. But I kept at it, and learned something new every time I made a mistake. There were many really, really late nights, because once I figured out what I was doing and got on a roll I wanted to keep going at it until I dropped.

“Though it took time and practice to learn the skills I needed, it also worked out very well in the end,” said Melius. “This way we completely controlled the artistic creativity in our book.” “That seems to be the real joy of self publishing,” said Roseland. “Susan and I had complete freedom to do the book exactly how we wanted it to be done. When we were finished we simply gave the completed work to the printer we hired. And unlike a publishing company that’s trying to save every dime of publishing costs, as long as we were willing to spend the money in the printing, the size of the book and the quality of the paper could be whatever we wanted. The result is that this book is larger and easier to read, and shows off the photos to best effect.”

Without a publishing company however, Melius and Roseland are the only parties responsible for selling and promoting their work. “In effect, our distributor is Uniquely Yours,” said Roseland. “We plan to make the book available in stores all over the state. Also in conjunction with the release of our book, Susan and I put together 24 framed photo poems.”

Currently the exhibit called, “Heart of the Prairie” is on display at the Dakota Discovery Museum at Dakota Wesleyan University in Mitchell.  The two are scheduled for a poetry reading and artist reception at the campus on Sunday, June 3,  at 1 p.m.