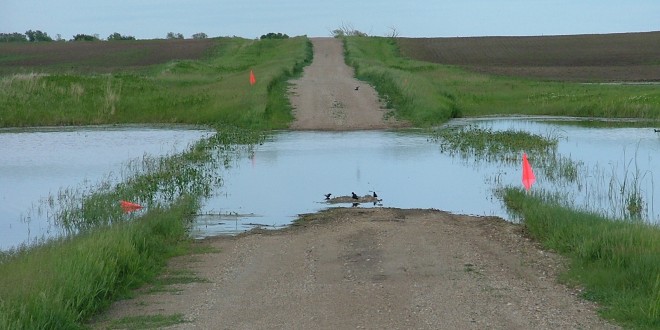 Birds play in water over a road in northern Brown County in June 2010. On Dec. 11, State Sen. Jason Frerichs and other members of the state watershed task force will tour areas of northeastern Brown County to see how they are doing two years later.

We may be in a drought now, but the damage from two years of flooding lives on.

S.D. State Sen. Jason Frerichs, recently elected to the newly drawn District 1, took a tour Tuesday through areas of Marshall and Brown counties that were hit hard by the floods of 2010 and 2011. The tour was part of his role on the state watershed task force, which was formed in part through Frerichs’ effort in the last legislative session.

Frerichs saw lots of evidence of the struggles against encroaching water, including canals and drainage ditches, and many dead or dying trees. Some flooded roads have now firmed up, but the gravel is gone—”they are basically a dirt path,” Frerichs wrote in an e-mail.

He also saw some things that could be problems in future wet years. A number of culverts at the end of a water movement are too small, which can cause water backup and overland flooding. Some dams built years ago might be causing more problems now, Frerichs wrote. He also noted that significant rain events, like a 4-inch rainfall in 12 hours, “causes huge problems for the system.”

The three-year water task force met in Pierre and Brookings this summer, and they will meet again on Dec. 10 at the Ramkota Inn, Aberdeen.

“This meeting is open to the public, and I welcome many folks to attend and testify if they feel comfortable,” Frerichs said.

On Dec. 11, the task force will tour areas affected by flooding in northeastern Brown County.

Frerichs noted that one area of focus for the Dec. 10 meeting is dealing with red tape to form local watershed districts, which can help farmers and other landowners come to agreement on how to deal with water issues. Landowners in the Mud Creek area near Groton formed such a district this summer.

“This was a project of Roger Rix and is a great example on how local folks can organize to manage water problems,” Frerichs said.