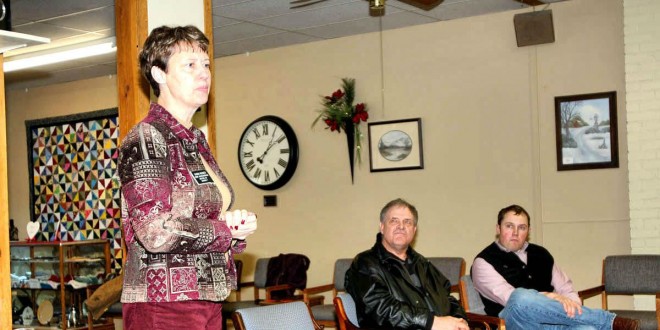 District 1 Representative Susan Wismer addressed a crowd of about 20 people at a legislative cracker barrel held at Fun After Fifty in Britton on Saturday. Representative Dennis Feikert, center, and Senator Jason Frerichs also attended the session.

A decade-old dispute that centers on whether sportsmen should have access to flooded private land was the center of discussion at a legislative cracker barrel held at the Fun After Fifty Senior Center in Britton on Feb. 23.

District 1 Senator Jason Frerichs and Representative Dennis Feickert discussed the “non-meandering water” bill that was introduced this year, and several area residents in attendance offered opinions on the issue.

Frerichs said the bill reached the third step in a five-step process before being tabled to work on over the summer. The Legislature effectively handed the issue back to the two sides in the fight, who now will work to forge an agreement that produces a new proposal to come before lawmakers next year. That development came after the Senate State Affairs Committee unanimously pushed off the legislative calendar to the 41st day of the 40-day session a proposal that would have settled the matter in favor of landowners.

At a committee hearing last week, Jeff Vonk, the Department of Game, Fish and Parks secretary, and Mike Shaw, a lawyer and lobbyist representing landowners, told senators they agreed with the decision to kill legislation. They added that they hope the two sides will reach an agreement.

“I was ready to vote for the bill before it was tabled,” said Frerichs. “It’s not our intent to shut down access to fishing spots, and our resources need to be as accessible as possible, but we owe respect to the landowners that are affected.”

Representative Susan Wismer promoted finding more state funding for education and Medicaid. She felt that the state has “built its reserves a lot” and should put some of that money into state services.

“There are a lot of the departments that one way or another have gotten back to normal since the cuts, but not education and Medicaid,” said Wismer. “And we do not have the dollars to fix education and Medicaid with our current revenue stream. We get an ‘F’ in effort in this state when it comes to funding our services.”

Wismer noted that it doesn’t help that federal sequestration is coming up this week. She said the state could stand to lose $20 million in federal money in addition to other funding that does not go directly to the state budget.

A question was raised on how the prison reform act will be paid for by counties. The bill promotes the use of probation and supervision for a number of violations instead of prison. Wismer said there is a specific formula to fund counties for additional services based on the number of people on probation prior to the new law compared to those after its passage.

The end of the current legislative session is set for March 8, and legislators will meet again on March 25 to act on any vetoes by the governor.