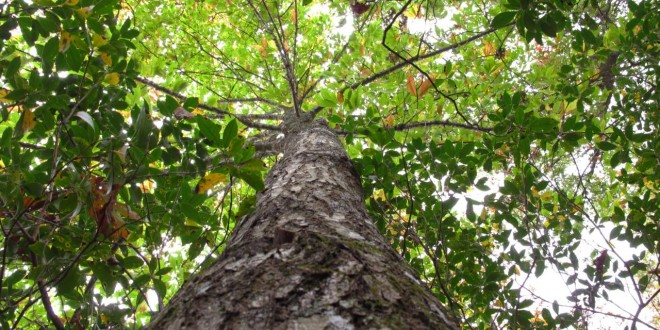 By Helga George, Special to Dakotafire

American chestnut trees, beloved for their grandeur and as a source of nuts, lumber and habitat for wildlife, once comprised a quarter of some hardwood forests in the eastern United States, and were plentiful in some places in the Midwest as well. Then, over the course of decades, their iconic form nearly disappeared from America’s forests. Through the dedication of many chestnut supporters, however, a long-term breeding program gives hope for renewal.

Chestnut blight first struck American chestnut trees in 1904, and since then billions have succumbed to this insidious fungal infection. The once-plentiful chestnut groves have been reduced to a remnant of their former selves. This has devastated rural communities that made their livelihood from the chestnut wood, ate the chestnuts, and grazed their livestock in the understories of chestnut forests.

Researchers found that the fungus was introduced from Asia, which has different species of chestnut trees than those in the U.S. All of these species are susceptible to the fungus to some degree, but trees such as the Chinese chestnut have a substantial degree of resistance to the fungus.

The American chestnut tree persists in a diminished form, since the fungus does not the kill the roots, and sprouts can re-grow. Some trees on the fringes of forests were not hit by blight. These surviving plants provide a source of the beloved tree to use in breeding programs.

Hot on the trail of creating resistant trees and restoring the chestnut trees to their former range, agricultural researchers started breeding for resistance in the 1920s. Chinese and Japanese chestnuts were an obvious source of resistance for these programs, but the trees are shorter and do not survive well in the forest settings that were once home to the American chestnut.

Despite initial disappointments, chestnut aficionados did not give up the quest to produce trees with the qualities of the American chestnut that were resistant to this insidious fungal infection. Avid chestnut researchers formed The American Chestnut Foundation (TACF) in 1983 to work on creating new types of resistant American chestnut trees.

Strategies involved both using a naturally occurring virus that attacks the fungus and using a different breeding plan to create resistant trees. These efforts have paid off with a strategy pioneered by plant geneticist Dr. Charles Burnham, a TACF founder. The first hybrid trees had too many characteristics of the Chinese chestnuts to make them desirable for growing in the U.S. He identified the strategy of backcrossing American chestnut trees with these hybrids, so the resulting new trees gain more and more characteristics of the American species.

The breeding programs have had many false starts over the years, but the latest generation of hybrids called Restoration chestnuts are showing a great deal of promise. A large number of them have been produced by TCAF members, who have generated 25,000-30,000 seeds and seedlings.

“Seventeen percent of the trees being studied are showing a high degree of resistance to the fungus,” said Sara Fitzsimmons, a TACF coordinator and Penn State researcher. “The true amount of resistance is likely to be even greater than this, since the experimental orchards contain some unselected trees that would not be likely to display any resistance.”

It is not clear whether the trees would maintain their resistance when they have to compete with other trees in a forest setting. The ability of the hybrids to compete in this manner is being tested, and results are expected in the next five years.

The results are so promising, however, that efforts are being made to restore land previously used for coal mining in Appalachia to its previous status as a chestnut forest.

Restoration chestnut trees are not yet available to the public, but the hope is that in 10-15 years, individuals will be able to plant resistant American chestnuts, restoring this beloved icon to prominence throughout its natural range and even beyond.

Some in the Dakotas have also shown interest, but unless the tree is in a protected microclimate, success is unlikely, according to Dr. John Ball, professor of forestry at South Dakota State University.

“The extreme temperature swings that are common in the Northern Plains would probably doom such efforts,” Ball said.

Even though chestnuts do grow in Canada, they grow in regions with fewer temperature extremes than are present in the Dakotas. Ball said he’s not aware of any examples of chestnut trees growing in South Dakota.

“The samples submitted to me of ‘chestnut’ trees in the state always turn out to be either horsechestnut or buckeyes, two completely unrelated trees,” he said.

Dakotans will just have to cheer on the chestnut restoration from afar.

American chestnut chestnut John Ball restoration rural 2013-05-14
Webmaster
Share !
Previous: FiredUp: My rejected question for Michael Pollan
Next: FiredUp: Why do we have so much more regulation today? Because we don’t trust each other.
Scroll To Top