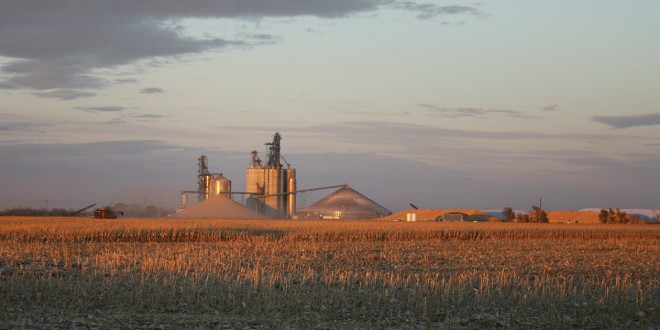 Many piles of corn surround the Mellette Grain Terminal of SD Wheatgrowers on Oct. 10 as a combine brings in more of the harvest from the field in the foreground. Photo by Heidi Marttila-Losure

Harvest in several towns in the James River Valley is not only well under way, it’s nearly done in some parts of the region—and it’s just mid-October.

Farmers have the drought to thank for the head start, though that’s probably the only kind word they could muster for it. Many farmers, however, have been surprised that yields are adequate to good despite the drought conditions for much of the summer.

Here’s an update of what’s going on in area communities:

When the new North Central Farmers Elevator facility in Faulkton held an open house on June 21, management hoped to complete the second phase of construction, the grain handling part, by Oct. 1, in time for what would normally be the corn and bean harvest season.

Fortunately, the facility was on line earlier. Thanks to that early completion of the project, NCFE began receiving corn and beans on Sept. 14. The three new 270,000 bushel bins (above) are full and there is currently approximately 160,000 bushel of beans and 310,000 bushel of corn piled up on ground storage.

Other storage facilities throughout the county also have a lot of grain stored outside in this unexpectedly strong and very early row crop harvest (in spite of the very low rainfall received this year – 12.68” so far this year in Faulkton).

To get an idea of the size of the new NCFE facility, note the semi-truck at the center of the photo.

In Wecota, a very busy Doug Roggow reported zero rain. “I’d say the corn is about 65 percent done and the beans are about 98 percent done,” he said. “Yield numbers are pretty much the same as I told you last week, about 90 to 120 bushels per acre with corn and averaging in the mid-thirties with beans.”

In Onaka, Shannon Waldman reported no precipitation and cold nights as harvest gets into full swing. “We’ve had no rain and plenty of wind, and it’s been getting pretty cold at night. Most guys are all done with beans with yields of 25 to 40 bushels per acre, and that’s pretty good all around for this year. Corn yields have been around to 90- 130 bushels per acre, and I’d say that the corn harvest is about two thirds finished and should be done by the end of next week or so, if the weather holds.”

“Well, it’s been pretty calm on this west end of the county,” said Kirk Hoefert of Seneca. “I hoped we might be having a little more moisture this month, but that hasn’t happened. It’s been getting colder and that stiff breeze has come back. But in a way it’s good we haven’t had rain even with the potential fire danger, because now the guys want to get out there and get it all done. I know some have held off on the corn right now and are going after sunflowers, because those are ripening nicely right now. But mostly it’s corn, corn, corn. A lot of it, if not almost all of it is going to be done before the first weekend of pheasant season. The birds will have trouble finding places to hide.

“I’ve not heard any numbers on sunflowers yet but the numbers I’m hearing on corn are still varied though a lot of it has been surprisingly good. Some corn has come in at 50-60 bushels per acre or less, but other yields have been up between 100 and 130. It all depends on who got timely rain, when and where they got it. This year has pretty funny weather. There are a lot of states that didn’t get anything resembling a crop, so that will mean a price boost for these guys, and that never hurts.”

The North Central Farmers Elevator in Leola recently began dumping incoming corn in a field south of town due to a lack of storage room at the elevator and the inability to get the corn shipped out fast enough, according to NCFE manager Bruce Geffre.

The pile of corn has grown to an approximate size of 240,000 bushels. Geffre verified that the largest amount of corn the elevator has seen in the past was about 90,000 bushels. He commented on the reason for the substantial increase in this year’s corn harvest.

“More people planted corn this year, and we had a good crop,” he said. He stated that current price for a bushel of corn stands at $6.80.

It is estimated that the corn pile south of town will increase to approximately 300,000 bushels.

Shane Johnson was driving the combine and Mason Kilker piloted the grain cart as they were harvesting soybeans near Britton on Sept. 24. Johnson said the yield monitor was reading 45-60 bushels per acre. Photo by Britton Journal

Producers in Marshall County are “pleasantly surprised” at their harvest this year.

After experiencing the driest growing season in 30 years, farmers didn’t know quite what to expect. Rainfall from May through August of this year was 7.15 inces, according to North Star Energy Records in Britton. That compares to the 100-year average of 11.82 inches and to 6.77 inches in 1982.

“Considering what we went through, the yield is pretty good,” said Curtis Samson of Muskrat Farm Supply in Eden. “Both the beans and corn are better than we were expecting.”

Samson said yields in the Eden area on beans ranged from 30-55 bushels per acre, while corn was going 100-175 bushels.

“Everybody for the most part is pleasantly surprised,” said Chad Voss of South Dakota Wheatgrowers in Langford. “Some of the fields in this area had only three inches of rain or less during the growing season and are still producing a very, very satisfactory yield. It’s always the timing of the rain, and thank God for last year’s subsoil moisture. That carried this crop through without a doubt.”

Yields in the Langford area were reported to be variable but in the 30-50 bushel range for beans. Reports on corn indicated a range of 130-200 bushels per acre.

Brent Schroeder of Full Circle Ag in Hecla said yields of 30-60 bushels for soybeans have been “a little surprising.”

“I think most of the guys are quite surprised, considering what the crop went through, but I think the hybrids and different varieties we have nowadays can handle the drought better.”

“Hybrids have slowly improved, and we haven’t had a year like this to see the results. I absolutely give kudos to seed companies for continuing to improve these seeds.”

Schroeder said this year is also unique in that the corn and bean crops were ready for harvest at about the same time in many areas.

“We’ve had guys doing both, and a lot of guys have hired help with beans so they could go on corn, but it’s pretty hard to find a custom cutter.”

The dry conditions and early harvest have also resulted in much drier crops than normal. Many of the beans are coming out between 8-10 percent moisture compared to an average of 10-13. Corn is also very dry in the 15-20 percent range with one report as low as 12 percent.

“It’s amazing that a lot of the corn is in the 15-20 percent moisture range already, and that’s at least a month or six weeks early on that type of moisture,” said Voss. “I also rode with some guys combining beans this weekend, and amazingly there is not as much shatter loss as we’ve had in other years when moisture gets this dry.”

Despite what has turned out to be a very respectable harvest, in a year that has also seen prices rise much higher because of a nationwide drought, area producers know that moisture is badly needed this fall and winter.

“The wet years we’ve had were a blessing in disguise in that we had a good profile of water going into the season and did have over four inches of rain in April,” Samson said. “We drew from that subsoil moisture a lot. But we will need some rain. We won’t be able to get by with the same scenario next year.”

September was the driest on record for North Dakota, South Dakota and Montana, according to University of Nebraska’s National Drought Mitigation Center. That helped farmers get their harvesting of corn and beans done with little interruption, but farmers looking to plant winter wheat are looking at the state of their soil and wondering if they should even bother.

“We had a brutally dry September. There is a lot of concern now about no moisture,” said Mark Svoboda, a climatologist at the center. “A lot of folks are holding off and wondering if they should even plant winter wheat and plant spring wheat instead.” 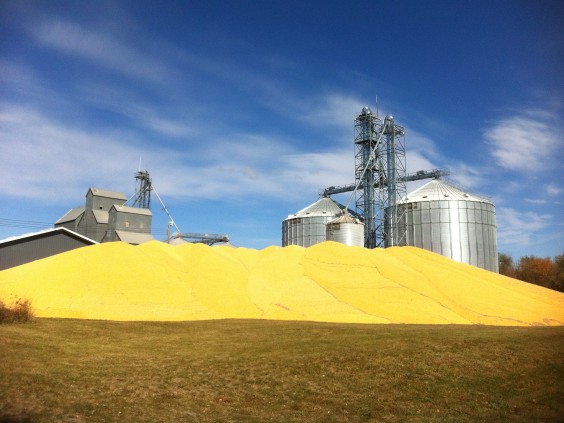 Corn was already piled up outside the Frederick Farmers Elevator on Oct. 6—well before corn harvest has even started in other years. A second pile has appeared next to the first one since this photo was taken. Photo by Heidi Marttila-Losure