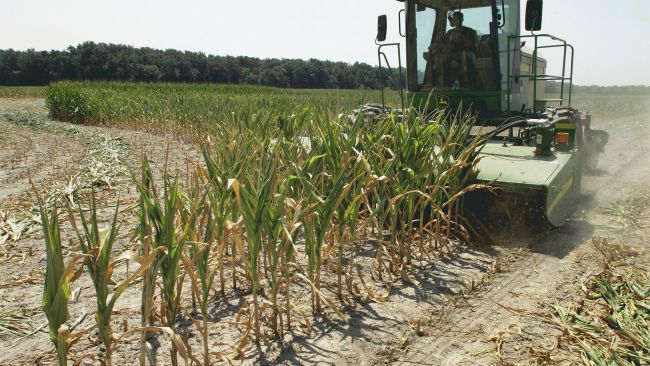 Steve Niedbalski chops down his drought and heat stricken corn for feed in Nashville Ill. Farmers in parts of the Midwest, dealing with the worst drought in nearly 25 years, have given up hope for a corn crop and are mowing over their fields and baling the heat withered plants for livestock feed. AP photo from Weather.com

Drought roundup: Parts of northeast South Dakota doing better than much of nation

Above: Steve Niedbalski chops down his drought-stricken corn for feed in Nashville Ill. AP photo via Weather.com (http://www.weather.com/news/drought-disaster-photos-20120713?pageno=10)

While northeast South Dakota has been blessed with just enough rain to keep farmers’ hopes alive that we might still get a decent crop, most of the country has not been so lucky.

News outlets around the country are reporting on the drought and its effects. Here is a roundup of what Dakotafire has seen and heard in the past few days:

What good drought stories have you seen? How is the drought affecting you? Comment below!