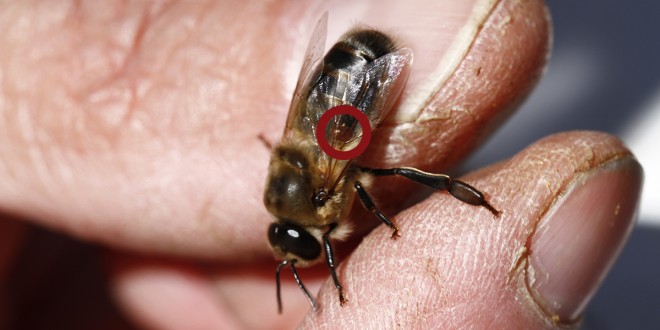 A Varroa mite (indicated with red circle) can be seen under the wing of this bee from Miller Honey Farms in Gackle, N.D. Beekeepers say the mites cause many problems for them. Researchers from the University of Minnesota say that poor nutrition resulting from habitat loss may be making the mite situation worse. Photo by Lindsay Anderson/Tri-County News

A Varroa mite (indicated with red circle) can be seen under the wing of this bee from Miller Honey Farms in Gackle, N.D. Beekeepers say the mites cause many problems for them. Researchers from the University of Minnesota say that poor nutrition resulting from habitat loss may be making the mite situation worse. Photo by Lindsay Anderson/Tri-County News

Editor’s note: This is the second in a two-part series about Dakota beekeepers and the mysterious problem of colony collapse disorder. See the first story here.

What is causing the significant increase in bee die-offs in the past decade?

Recent research suggests there’s no single cause, instead pointing to several factors that combine or interact to weaken or kill bees. But according to an ongoing study in Stutsman County, N.D., at least one of those causes is tied to changes in the Dakota land where those bees buzz away their summers: The conversion of grassland to cropland is affecting bees’ diets, which makes them less healthy.

The problem with many causes

A comprehensive federal report, released in May by the U.S. Department of Agriculture and the Environmental Protection Agency, found that many factors play a role in honey bee colony declines, “including parasites and disease, genetics, poor nutrition and pesticide exposure.”

No one factor was listed as more to blame than any other.

One big problem, if you ask many beekeepers, is a non-native parasitic mite called the Varroa destructor, which latches onto bees and weakens them.

“(It) works like a tick, vectors disease like a tick,” said Gackle, N.D., beekeeper John Miller. Another beekeeper said it would be as if a softball-sized tick latched onto a human.

Getting rid of the mites is a challenge. How, after all, do you get rid of an insect on an insect? Some treatments are available, but they all require exact use so they don’t damage the bees.

Pesticide exposure is also damaging to bees, but to what extent is the question, since that determines what kind of action is needed. The federal report called for research on the topic.

The European Union, while also recognizing that not enough evidence exists to establish a cause-and-effect relationship between bee die-offs and the use of pesticides, nevertheless in January banned the use of a class of pesticides called neonicotinoids while research is completed.

The increase in use of neonicotinoids since 2005 roughly tracks increasing bee die-offs, according to a March New York Times story.

“Soybean fields or canola fields or sunflower fields, they all have this systemic insecticide,” Richard Adee, a beekeeper from Bruce, S.D., was quoted as saying in the NYT story. “If you have one shot of whiskey on Thanksgiving and one on the Fourth of July, it’s not going to make any difference. But if you have whiskey every night, 365 days a year, your liver’s gone. It’s the same thing.”

Scientists have found 150 chemical residues in wax gathered from beehives, so it’s possible that no one pesticide is responsible, but rather the cumulative exposure to so many.

Finding answers to questions with so many variables isn’t easy—and a multitude of chemical residues is only one piece of the puzzle. Some researchers are starting with the question of nutrition, which may affect how well the bees are able to deal with problems like mites and pesticide exposure. And that has led the scientists to Stutsman County, N.D.

The research project looking at how well bees eat is being run by the honey bee research lab at the University of Minnesota’s Department of Entomology.

Matthew Smart is a doctoral candidate who is working with fellow student Elaine Evans on the project; entomologist Marla Spivak, from the University of Minnesota, and research biologist Chip Euliss from the U.S. Geological Survey in Jamestown, N.D., are also involved.

Smart said a lack of flowers from which bees gather nectar and pollen, their only food sources, is recognized as a problem in the beekeeping and research communities alike.

Their research has looked at how a lack of variety in food sources affects the health of bees. They measure bees at six sites in Stutsman County: Some sites, situated amid row crops, have very little floral diversity, while others, in pasture or Conservation Research Program land, have many varieties of flowers to choose from.

Bees in pasture or CRP also have food available more often: When there are fewer varieties, there is less chance that something will be blooming when bees are hungry.

“It’s important to realize that (bees) have to have flowers, nectar and pollen throughout the whole period of time in which they’re active,” Euliss said.

Over several years, they found a clear pattern.

“Our results show that when honey bee colonies are positioned in landscapes composed of a high proportion of corn and soybeans, more colonies die before even getting to almonds,” Smart said. “They also make a lot less honey … this is absolutely devastating for beekeepers.”

Smart said when they look at the bees, the ones in the low floral-diversity sites are not as fat and so have little nutrition in reserve. Euliss said the bees show an elevated immune response, likely because they are weaker from a lack of nutrition and get diseases more easily. They are also less likely to be able to withstand the strain caused by Varroa mites.

“Something is stressing the bees,” Euliss said.

And, if current land use trends continue, that stress is likely to get worse. Sources disagree on exactly how much land has gone from grassland to cropland in recent years. A recent report by the Farm Bureau suggested about 9 million acres of grassland has been converted to cropland in its study area of seven states between 2006 and 2011. A report from the Environmental Working Group last year said 23 million acres had been lost in its study area of 11 states. Either number suggests the trend is moving toward less grassland. 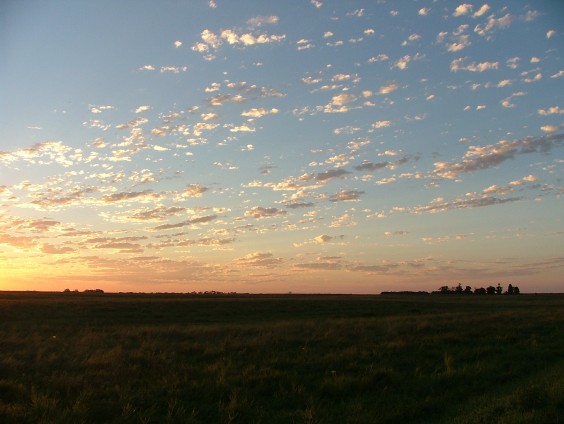 This land in Brown County, S.D., is one example of many parcels of land that has been taken out of the Conservation Reserve Program in recent years. This photo was taken in 2010. This year, this field, like much of the land on either side, is growing corn. Photo by Heidi Marttila-Losure

The more grassland that’s converted, the harder it will be for beekeepers to find places to put their hives that will provide enough food to keep the bees healthy.

“If current agricultural practices involving ever-increasing plantings of non-bee-friendly crops, like corn and soybeans, continues (without an appropriate amount of land being put back into pasture, fallow, CRP, etc.), we will likely reach a point where this region of the country that has historically supported healthy and robust honey bee populations … will no longer do so,” Smart said. “If that were to occur, I don’t know where the beekeepers could go with their bees to keep them healthy and alive.”

What can be done to make sure the honey industry in the Dakotas stays viable?

Beekeepers don’t own much of the land on which their bees forage for the summer. Landowners generally don’t get money for the bees’ use of the land, instead getting paid in the bees’ pollination services and a few containers of honey at the end of the season. Comparing that value to the difference between the income from pasture and the income from corn or beans is not likely to be persuasive to those making land-use decisions.

CRP land is bee-friendly, but the number of acres enrolled in CRP dropped every year from 2007 to 2012, suggesting that the rates offered by the government to keep land in the program are not competitive with good corn and soybean prices. Bees are popular with the general public, but increasing CRP rates as dramatically as needed so the rates are competitive might not get support from budget-conscious taxpayers.

Decreasing or eliminating federal subsidies for crop insurance, which some have argued pushes farmers to crop marginal land that would be otherwise too risky, might have more public favor but also has significant political opposition.

In the end, persuasive arguments might have to use language that doesn’t include dollars and cents. Bee advocates can try “neighborliness,” “self-sufficiency,” “resilience,” “balance” and “love of the land.”

Whether that will work is anybody’s guess. But if grassland isn’t preserved in some way, the research suggests beekeepers will suffer—and eventually, so will consumers. Beekeeper Miller predicts that bee-pollinated food is going to become more expensive as it gets increasingly difficult to find enough bees to do the work.

And if that happens, the menu for those in the Dakotas and across the country may well be a little less sweet.