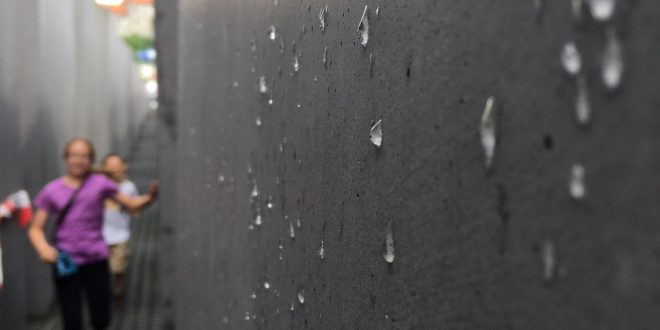 Facing the past: A few lessons from Berlin

How should we deal with the painful chapters of our history?

Bring them up and make people uncomfortable? Think about only the parts that make the people who are most like us look good? Skip them altogether?

I was fortunate enough to go to Berlin in June—not only fortunate to go, but also fortunate to go at a time when those questions (which we asked as we put together the July/August issue) were going through my head. Germany, as we know, has plenty of dark chapters in its past to deal with—and, from what I saw on my trip and learned through conversations there, I think today’s Germans are doing their best to deal with the past they inherited.

Here are three things I learned from experiencing Berlin:

It might be possible to walk through Berlin without coming into contact with reminders of its history—but only with some purposeful detours. The whole city was the stage for events that held the world’s attention for decades: The rounding up of Jews before and during World War II. The rise of the Nazi party and its increasingly brutal intolerance. The Allied bombing of vast swaths of the city. The airlift that supplied Berlin’s people with whatever was needed for survival during the Soviet blockade after the war. The wall that become the symbol of the Cold War for decades.

Pieces of that history are still visible in every direction.

It might have been possible for Berliners to cover over the remnants of all this history as it evolved into the modern center of commerce, media, politics and culture that it is now, but that’s not what happened. Leaving history uncovered happened partly by force, I’m sure, as public shaming is part of the cost of being on the losing side of the war. But I think people also made deliberate choices to leave history where it can be seen, and even where it is allowed to intrude on everyday life.

These “stumbling stones” (Stolperstein) are one example. This one is right in front of a neighborhood store; a farmer’s market, where we picked up some strawberries, was taking place on the street outside. We’d just been inside the store to get some water on that hot day when my German friend, Dan, pointed out the stumbling stone to me. (These feet belong to him and to my daughter and son.) 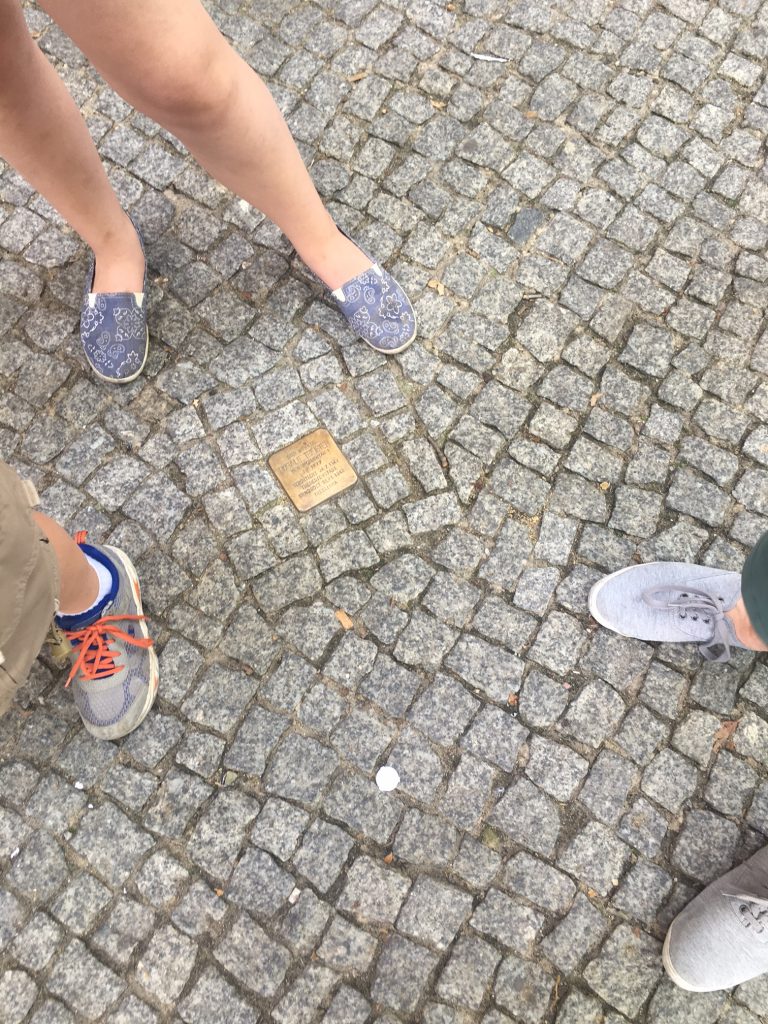 These markers point out where someone who died at the hands of the Nazis had lived—someone who went about his or her daily life right where we walked. Maybe getting strawberries from the nearby farmer’s market, or a drink on a hot day. In this case, it was a 65-year-old woman named Rosalie Treister, who died in the Treblinka concentration camp in 1942. 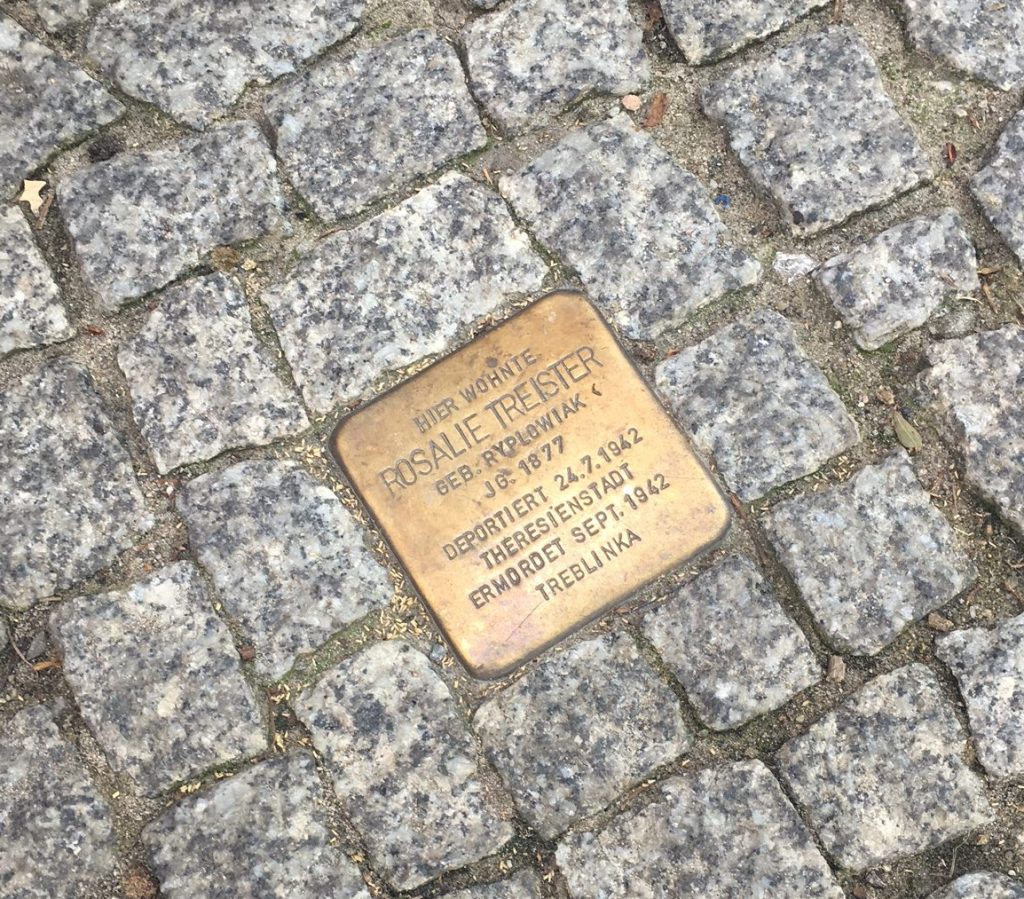 These stones aren’t raised up enough out of the sidewalk to actually make someone stumble, but for those who stop to read them, they are enough to insert a pause into the day’s rhythm.

Our day’s itinerary included a walk along the route where the Berlin Wall once stood, which now includes large photographs of what that place looked like during other years. The earlier pictures start out with people on both sides of this artificial boundary (it was based on the city’s districts) just looking at a roll of barbed wire being unrolled between them with some confusion. It did not, at first, look like a impenetrable barrier. 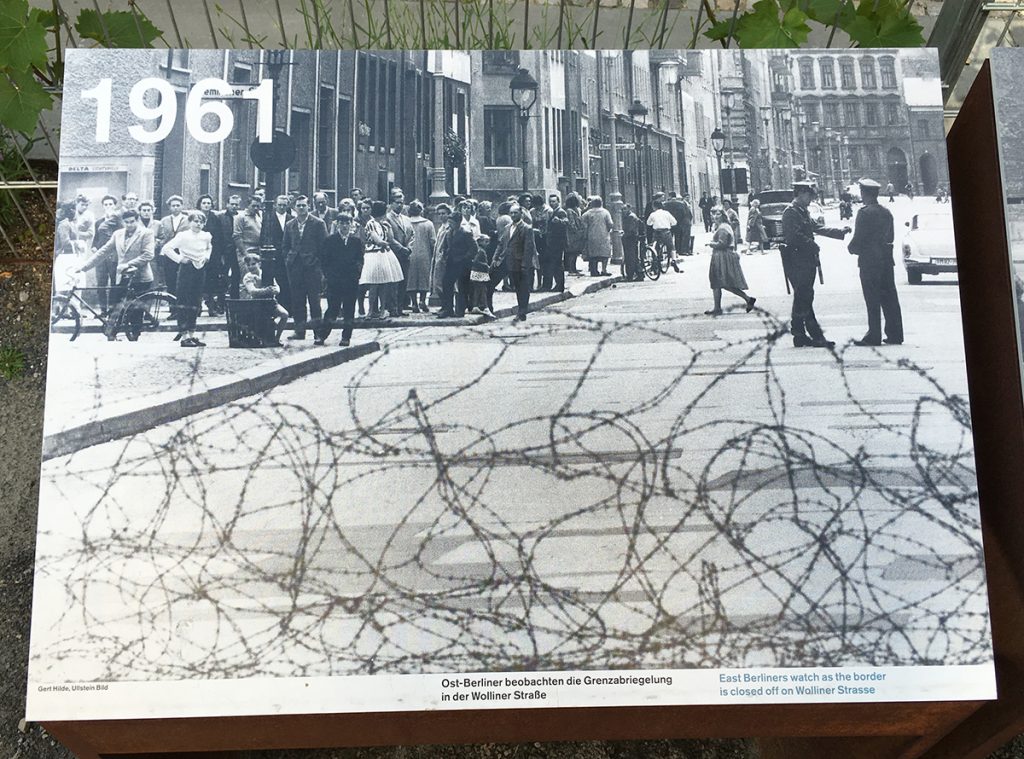 Then the wall become concrete, with a no-man’s land in between. Eventually, anti-tank barriers were installed. The no-man’s land was guarded by armed soldiers. 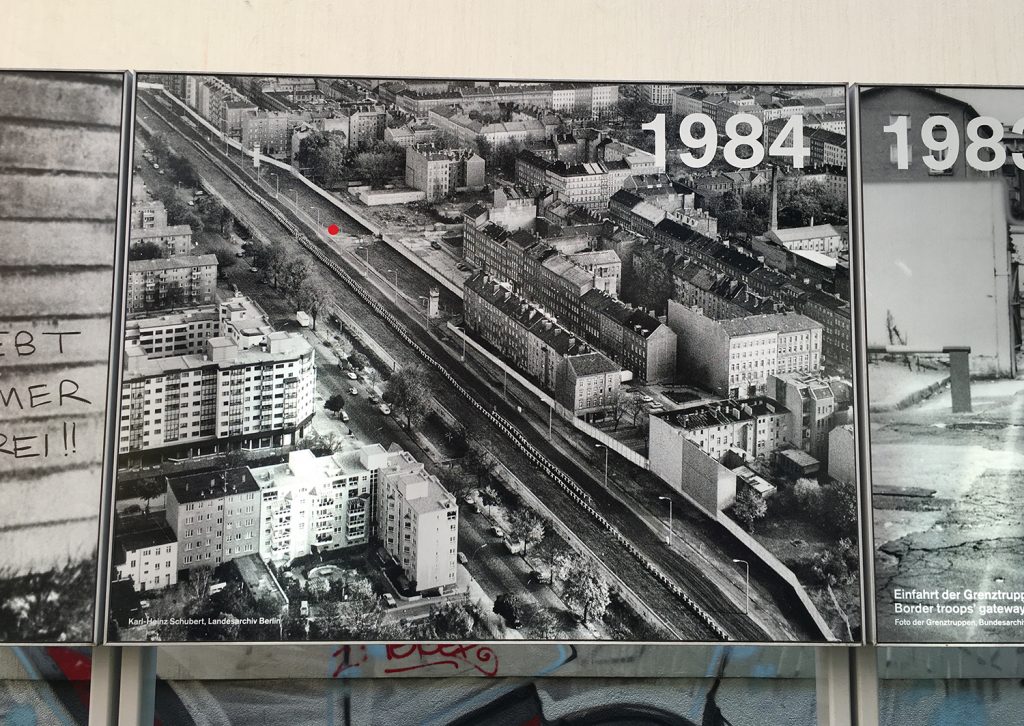 It’s funny to think about this border just arising between neighborhoods. Who would have thought that neighbors would be divided for decades? Sometimes families were divided, so people would climb ladders to catch a glimpse of their family members on the other side. (Though Dan told me this didn’t last long on the East Berlin side—the imagery wasn’t good PR.) 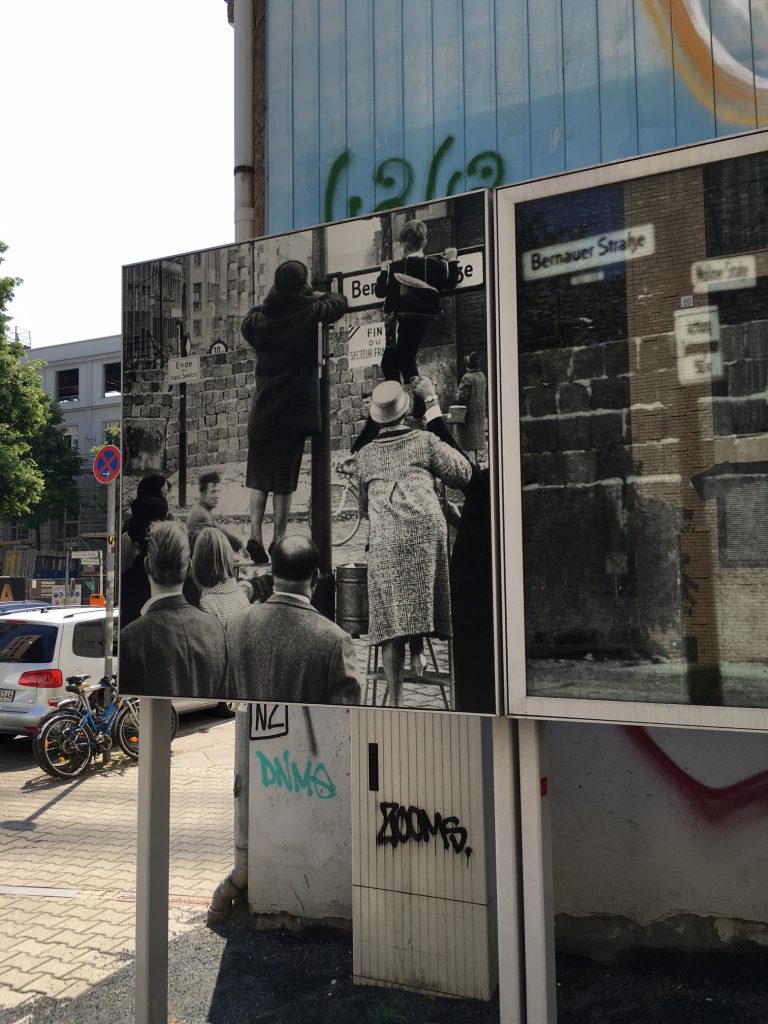 Here a grandma and grandpa teeter at the top of a ladder to see someone over the wall. 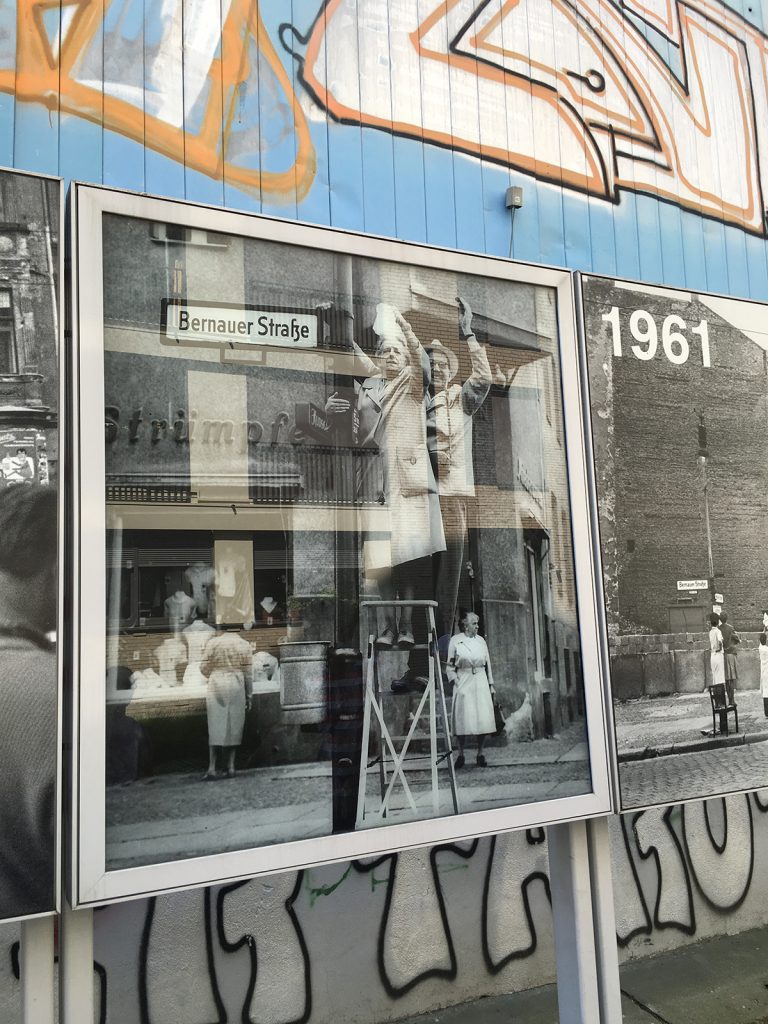 This was apparently the way baby announcements were done across the wall. 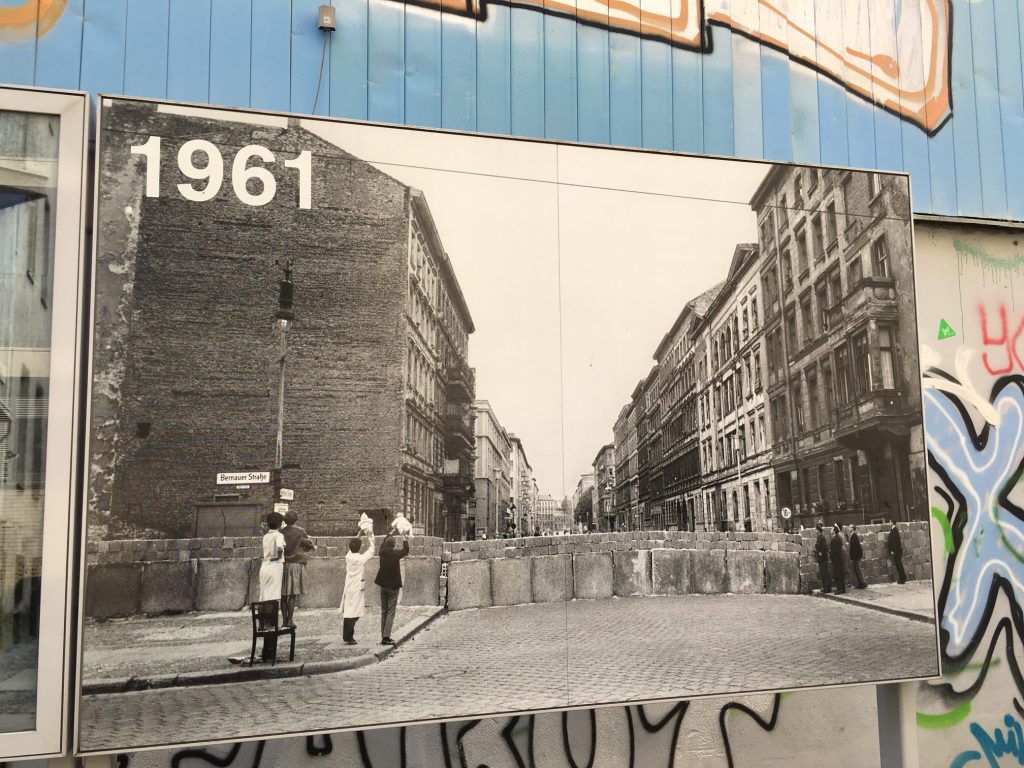 There is just a nondescript sign for this book-burning memorial at Bebelplatz in Berlin. You only see the memorial if you happen to be walking by—and then you can’t help but peer through the window into the space below. 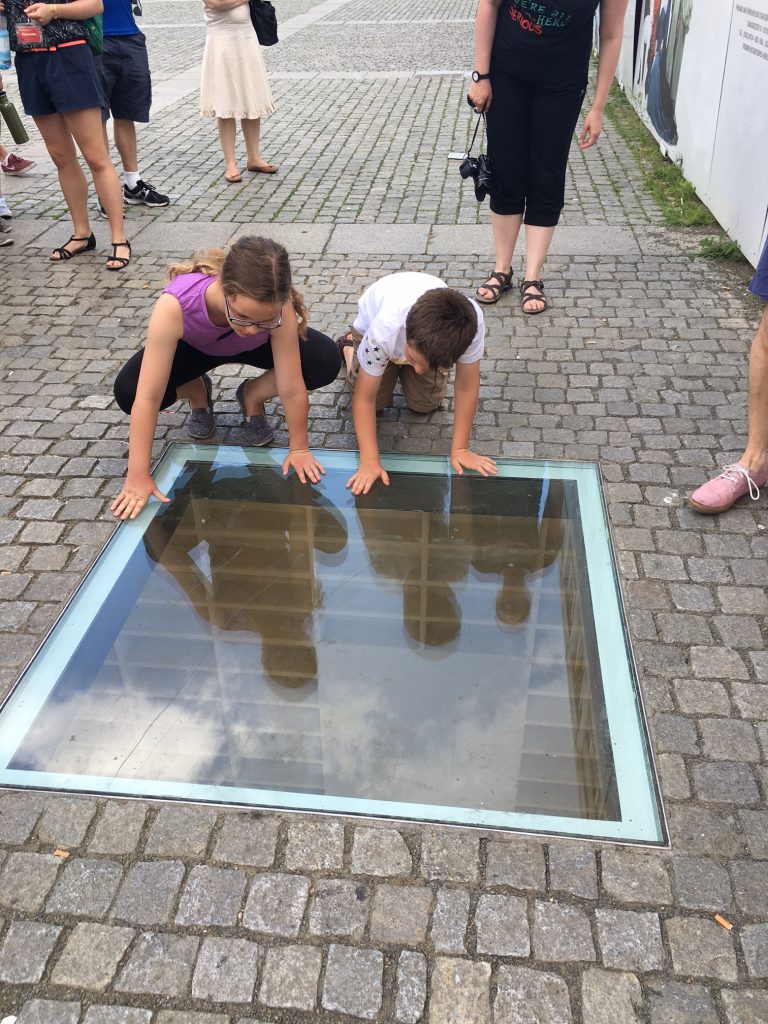 The empty bookshelves beneath the glass could fit 20,000 books—a reminder of the “approximately 20,000 books, which the Nazis burnt on May 10th, 1933 on this place: works by journalists, writers, scientists and philosophers, seen as a threat to the Nazi ideology.”

The stumbling stones, the Berlin Wall images and the book-burning memorial set history right out in the midst of regular life—not in museums, although Berlin has plenty of history there, too. But I think having these reminders of the past in plainer view, right where it happened, sometimes interrupting our plan for the moment, can have a greater impact.

2. To move forward today, we must forgo celebrating some parts of the past.

Here in the U.S., we have no qualms about celebrating our military. That honor of the military is not something that can happen at anywhere close to the same level in Germany.

This is not surprising, considering that the horrors of Nazi Germany were state-sponsored, and the military inflicted much of the damage or at least made it possible. The evils of that era are very much tied to those who wore German military uniforms.

But think about the individual German soldier at that time—he likely didn’t have any more control of military decisions than the decorated U.S. Army soldier did. He, too, was a human being, a mother’s son. Someone almost certainly wept when he died.

But in Germany today, giving due respect to the millions who died in the Holocaust means that military service is not celebrated as we celebrate it. It is one small way of making amends.

The Neue Wache shows this shift in mindset. It was once a memorial to those who died in the Great War. At first it had in the center a block of black granite and a silver oak wreath, a symbol of strength.

It was rededicated by Communist leaders in 1960 as a “Memorial to the Victims of Fascism and Militarism.” The remains of both an unknown solder and a victim of a Nazi concentration camp were placed there. In 1993, this sculpture, Mother with her Dead Son, was installed where the granite and oak wreath had been. 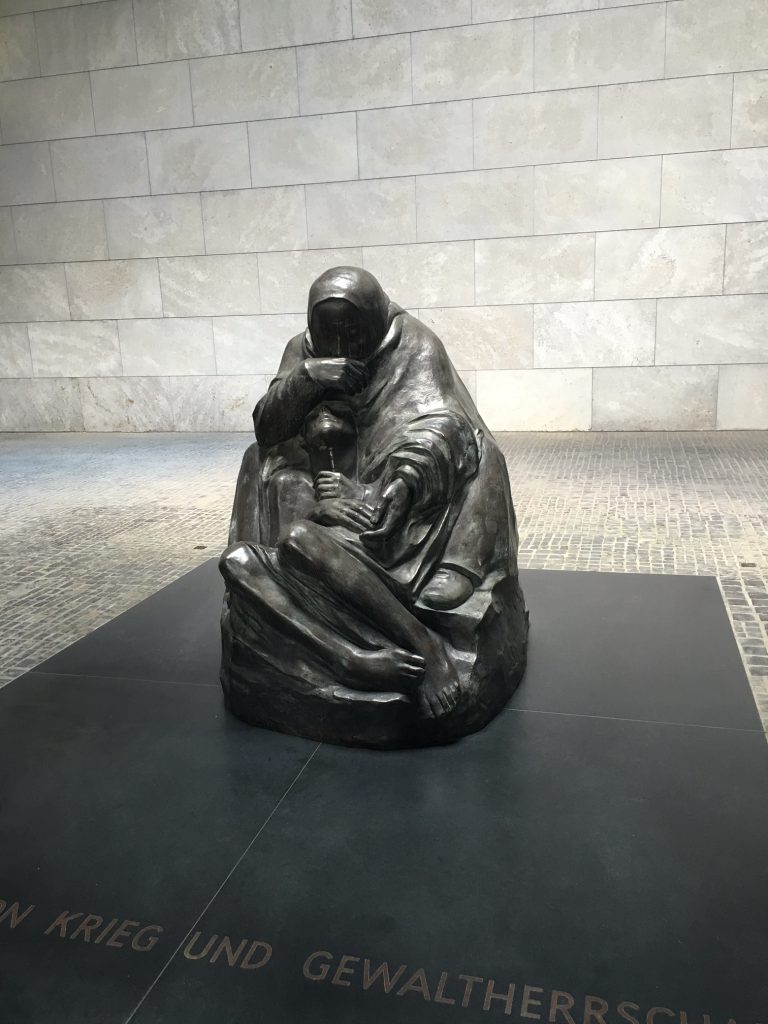 Who is that dead son? Was he a soldier? Someone the Nazis considered “undesirable,” such as a Jew, a Roma or a homosexual? A civilian who just happened to be in the wrong place at the wrong time?

As you look at the mother cradling her child—do any of those descriptions matter?

The memorial is now called the “Central Memorial of the Federal Republic of Germany to the Victims of War and Tyranny.” Read the description—that’s quite a distance from its start as a monument to war heroes. The soldiers aren’t forgotten, but neither are war victims of many other kinds. 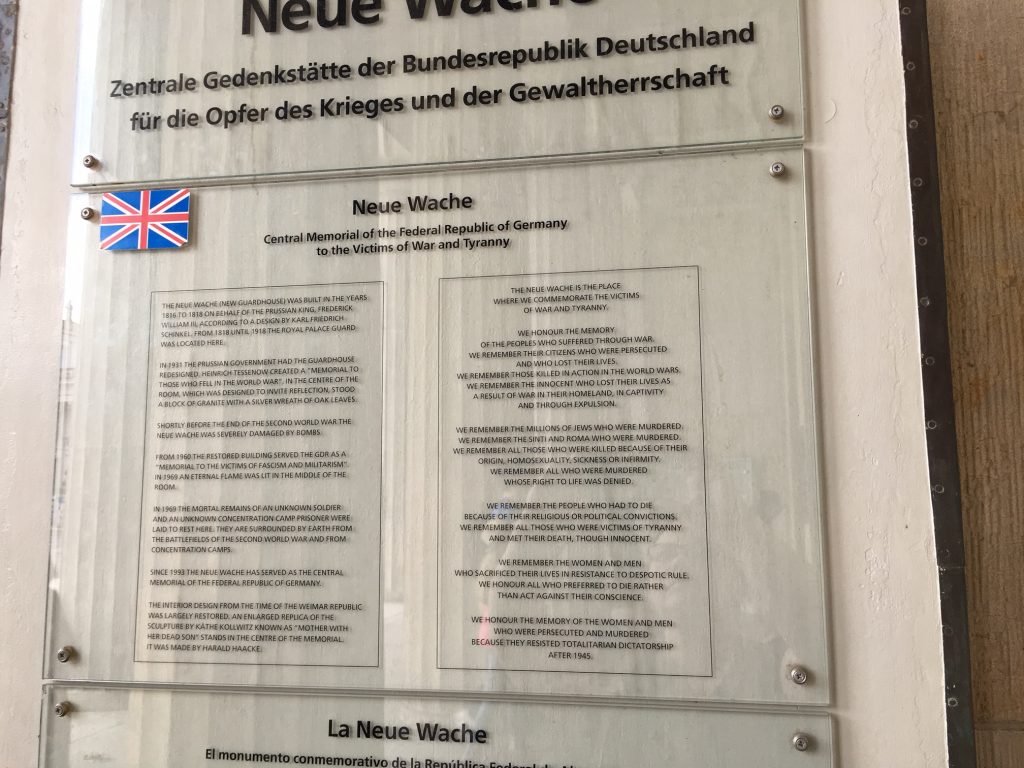 I wondered, as I read this, whether it would be possible for one of war’s “winners” to come to the place where these Germans are now, where all victims are mourned. I don’t know.

3. The lessons of the past should affect our present.

I asked my friend Dan how he thought Germans dealt with the painful parts of their past.

He said, first, that they know they can’t erase it. It’s there, a shadow on their national identity. And second: It is playing a role in today’s decisions. Many Germans today feel that they cannot be average, that because of their painful history, they must always be better, striving to do the best possible thing, whatever the circumstance.

I had known, before I arrived in Berlin, that Germany is being very welcoming to Syrian refugees. Dan said that this is in large part still a response to Germany’s past—other countries might be able to show less compassion in their response to people in need. Germany cannot.

You might say that as those on the losing side of the war, Germans were not allowed to forget their past—it wasn’t really a choice. That may well be true. But that memory of the past also forces Germans to deliberately reject that past so that it doesn’t define them, and deliberately choose different paths forward. Those of us on the winning side don’t have that push to make a decision. Without that resolve to be better, some of us might drift in less noble directions.

In addition to the questions I’d brought to Berlin, I left with a few more: What would happen if more of our past intruded on our daily lives? What would our response be to those glimpses of the past? How would this affect our present?

I don’t have the answers. But I think it would be worth a little discomfort to find out. 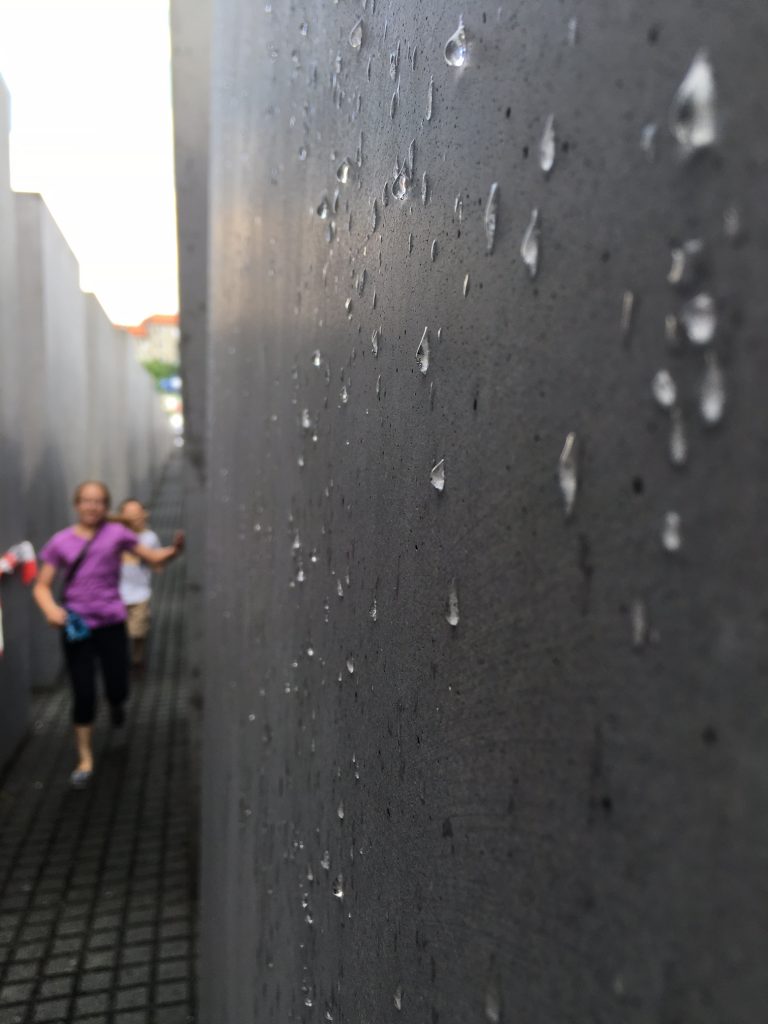 Rain clings to the side of one of the cement pillars in the Holocaust Memorial in Berlin. By Heidi Marttila-Losure