Print This Post
Another 8-year-old might have spent his birthday money on toys or games for his iPod. Not Trey Jensen. Instead, the Langford boy invested his $100 in his community. 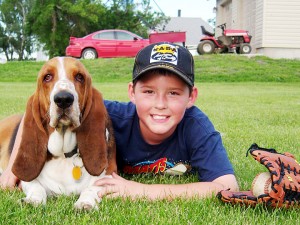 Another 8-year-old might have spent his birthday money on toys or games for his iPod.

Not Trey Jensen. Instead, the Langford boy invested his $100 in his community.

Four years ago, Jensen heard about the new Langford Community Foundation through his 4-H group. Patty Ogren told the 4-Hers about the possible improvements to the community that could happen with more resources to back them up: Making the playground nicer, for example, or buying a trailer for the 4-H group’s paper recycling program.

So, when Jensen received a few bills in his birthday cards some time later, he gave some of them to the foundation.

“Our town is pretty good,” Jensen said. “It’s good to invest in it.”

Jensen not only gave of his own money, but, inspired by his 4-H leader’s words that they could ask others to invest, he challenged his uncles to open their wallets as well.

They did. Jensen’s $100 became $500 toward the foundation’s fundraising goal. Foundation organizers shared his story as they spread the word about the foundation, which may have encouraged others to donate.

“One boy raised $500 that will keep giving back to his hometown, his pride, his hope and his future,” reads a story put together by foundation organizers about Jensen’s gift.

These days, Jensen’s time is taken up with 4-H activities and mowing. The 12-year-old has been busy working with his 4-H group on a pheasant repopulation project for their area. They’ve done research on food plots and other things the birds will need to survive, according to his mom, Paula Jensen.

And he hasn’t given up on investing in his community. When his family was talking about Langford’s latest project at the dinner table, a building called Main Street Center that will include a new bar, Jensen asked, “Will they let me invest in that?”

The planning group structured the process so that people of any age can invest, so Jensen is ready to buy a $100 share with some of his mowing money.

Does he think he’ll be the youngest investor in the new enterprise?

He’s investing, even though he won’t even be able to purchase a drink there for nine years.