Join the conversation on youth engagement in Doland Nov. 17

How can we better connect youth and community?

That’s the question that will be the main focus of a conversation event in Doland on Tuesday, Nov. 17.

The event, called a Dakotafire Café, is part of a series of events held in small towns across the Dakotas that is intended to spark community conversations around topics presented in Dakotafire magazine. The November/December issue takes deep look at youth engagement, with stories from around the region and even the nation on how youth can be meaningfully involved in their communities.

“We know that Doland has some youth engagement activities already in place, so we’re eager to hear from both young people and community members about what’s working and how to make that connection even better,” said Heidi Marttila-Losure, publisher and editor of Dakotafire Media.

The event will start at 2:45 p.m. in the Doland School lunchroom, where seventh- through 12th-graders will have their own conversation. Facilitators provided by Dakotafire Media will guide the process so the students have a chance to both listen and learn, and to be heard.

Youth and adults are both encouraged to take part in an activity to follow this conversation time, at 4:15 p.m.—the group will divide into teams to go geocaching in the Doland community.

A community supper sponsored by Beadle and Spink Enterprise Community (BASEC) will follow at 5:30. All are welcome!

A grand conversation time for all ages, starting at 6:30 p.m., will conclude the event. This will be a time for both young people and adults to discuss what it means to be members of their community.

The event is open to more than just Doland residents; however, the afternoon conversation time is open to youth only so they are more comfortable speaking freely.

Coverage of youth engagement in Dakotafire magazine was part of a project called the Prairie Idea Exchange (PIE). Story ideas were generated in part through an event on Sept. 9 that brought together economic developers from across northeastern South Dakota. This was the fifth PIE event; the final PIE gathering will be from 1:30 to 4:30 p.m. at the Dakota Event Center in Aberdeen, and unlike previous events, it will be open to the general public.

The Prairie Idea Exchange is sponsored by the Bush Foundation, Grow South Dakota and Dakota Resources.

BASEC is a sponsor of distribution of Dakotafire magazine in the area that the organization serves. 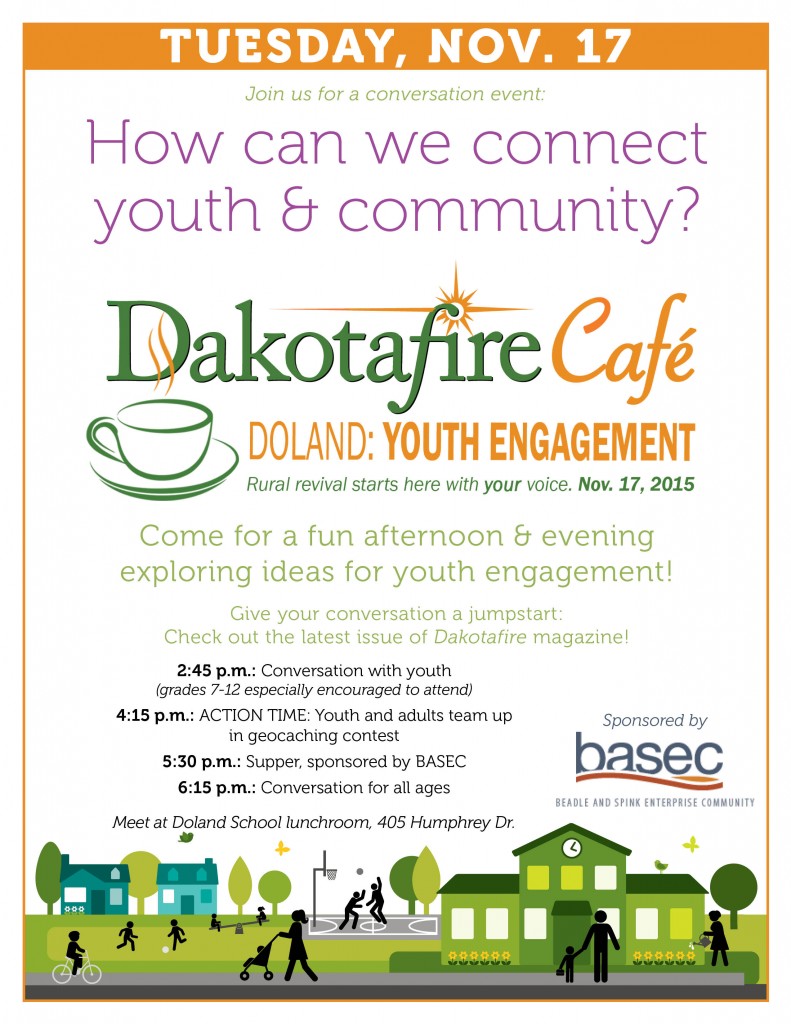