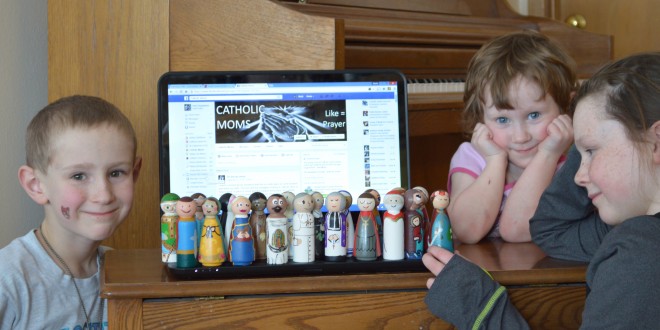 Max, Gemma and GiannaMaria Stangeland of Valley City, N.D., proudly display the Catholic saint peg dolls made by their mother, Barb Stangeland, and 19 other mothers across the country. The women connected through a Facebook group for Catholic moms, and each hand-painted 20 “copies” of one saint, then sent them to a woman in Kansas, who boxed up sets and shipped them to each family, for either play or to be put on display. Stangeland, who works from home for Humana and has moved from Brookings, S.D., to Salem, S.D., to Valley City, N.D., due to her husband’s career changes in the past two years, said social networking has helped keep her connected to friends and family, as well as grow her faith, hobbies and interests, in ways that otherwise would be difficult. Photo by Jenney Grover

by Wendy Royston, with additional reporting by Doug Card

The Dakotas may be geographically secluded, but technology has made rural life less isolated.

“(Facebook) is a way for me to stay connected to the world, because I don’t leave the house to go to a place where there are other people,” said Barb Stangeland, who works as a care manager for Humana from her home office in Valley City, N.D.

Stangeland is among the majority of Americans who engage in online social networking. Like many people, Stangeland not only connects with friends and acquaintances utilizing her Facebook profile, but she also has made new friends online through the use of—quite literally—social networking.

A former roommate created a group for fellow Catholic moms in 2011.

“She was living in … (Minnesota) when she started it,” Stangeland said of the once-small group. “She invited friends that she knew and thought could give good Catholic mom advice, and we invited our friends, who we thought would enjoy the group, and somehow it got big … and it wasn’t so that everybody knew each other in some sort of way.”

Now at more than 700 members worldwide—most of whom have no personal ties to the group’s creator—Stangeland said the group still is a valuable source of information.

“It’s a safe place to ask Catholic-related questions or … mom questions,” said Stangeland. “When it first started, it was a way to stay connected with those people that you already had connections with, but not a relationship that you saw them every day.”

Packing up and moving lifestyles

“A lot of people are shifting around, and it allows people to stay in better touch with friends (and) loved ones,” she said. “In some ways, we can take our communities with us.”

Amber Drake, who recently moved from Brookings to her husband’s hometown of Bowdle, S.D., agreed.

“Even though there is now more distance between some of my best friends and myself, we remain great friends and are still able to share life’s ever-changing moments or encourage each other even with miles in between,” she said.

They “have really strengthened my faith in many ways and provided encouragement when I feel like I am struggling with the daily trials of being a busy wife and mother,” she said. “The groups provide a central location where many people post things that are often shared faster than real life conversations and have the ability to reach many individuals at the same time and location.”

Stangeland, who has made two moves in just over two years, said the Catholic Moms group at times has helped with making new friends in a location new to both her and her husband. When they lived in Salem, S.D., Stangeland had connected electronically for about a year with a woman from a neighboring town before that woman’s husband died.

“We always said we should meet in person, but we never did until after he died,” Stangeland said. The two have become close friends since then, and because of Facebook remain in contact even though the Stangelands again have relocated, this time to Valley City, N.D.

A Bowdle, S.D., family found its only truly “kindred” friends through a Facebook page linking adoptive parents of Ethiopian children.

“Kobe is the only black child in Bowdle, so I have no access like this here,” said Angie Bishop, who with her husband, Jason, adopted their son almost three years ago. “We may talk hair care or traumatic anniversary (issues). We may talk about something that was said to their black child in our white world. … It is wonderful to connect with people that have been there/done that and people that just get it.”

Although online interaction within AGCI Ethiopia has been a huge support system in the Bishops’ family, meeting some members of the group was a priceless opportunity.

“We are a family, (and) it was so awesome to finally hug them and see their faces in person and not just a picture on a computer screen. … Our hearts are connected in a special way,” Bishop said.

Last year, some online friends learned she was struggling to afford a plane ticket to an adoption conference on her and her husband’s teachers’ salaries.

“They took up a collection and gave me money toward a plane ticket. Still, the thought of this brings me to tears,” Bishop said. “This just shows the level of love this group has.”

Redlin said creating ties such as Bishop described is an advantage known only to the modern era.

“(The internet) can build that social capital,” she said. “It offers that unique opportunity. … In some ways, some of those advantages are untapped, in the way that we’re still trying to figure out how to use them.”

The community of Langford, S.D., used Facebook to organize its social capital before the community’s 125th birthday celebration in 2011. The page bolstered local interest in planning the celebration, and enticed alumni and other former residents to partake of the festivities. Since the 2011 celebration, the Langford SD Facebook page has continued to grow.

“Langford is a town of 300 people, and we have 2,315 friends on our Facebook page,” said page creator and administrator Paula Jensen.

Often, posts on the page center on the happenings at Langford Area School.

“Right now, we’re pretty heavy into basketball season, which is really huge in our town,” she said. Recently, social media kept people updated on a major basketball game. Jensen posted a link to the game broadcast online, and many people in town opted to watch from the warmth of their homes, rather than drive over an hour in frigid temps. But the link malfunctioned.

“I think it got overloaded, but … people, through their Facebook pages, and through their smart phones, were posting scores (and) photos. … There were all these different feeds of people connecting over this basketball game.”

A forum for memories

Britton native Steve Bruce, who now lives in Minnesota, had seen other Facebook pages “where it looked like they were having a great time reminiscing about days gone by and finding old friends or people they knew.”

Originally hashing out his memories of Britton on his personal profile, Bruce eventually developed the page in an attempt to include people who were not his Facebook friends, and the result was bigger than he ever envisioned.

You know you are from the Britton area when you can remember… was established in 2011 and now has 732 members—more than Bruce ever anticipated.

“I didn’t think it would grow the way it did, but it is awfully fun to read and hear about what happened before and after my time at home,” he said.

The group has even united folks who called Britton “home” for mere months, but who are looking for long-lost friends. The result is entertaining to all.

“I truly love to remember or open up more old stories regarding living in Britton for those who may not have heard them,” said Bruce.

Stangeland, who homeschooled her four children while living in Brookings, said Facebook pages about homeschooling helped with curriculum development.

“You can do a lot of web-searching and never find that (perfect) book, but when somebody recommends it to you,” because of a request for advice, it’s more easily found, she said. “In a smaller area, you’re not going to have many people to ask those questions, because not many (homeschool).”

Other obscure hobbies and interests now are more easily enjoyed in rural areas because of social media.

“I get to see members’ tanks, ask and answer questions, buy sell and trade, and learn about events,” Reeves said. “I wouldn’t have access to the same information (without the groups). I don’t know anyone in Groton or Aberdeen who is into planted tanks. Even the pet stores aren’t much help.”

Stangeland said involvement in Facebook created a new hobby for her family.

Through the Catholic Moms page, she became one of 20 women from across the United States, who painted wooden peg dolls to represent various Catholic saints. Catholic Saints Peg Doll Swap was organized by a woman in Kansas who gathered the peg dolls, mailed them to the other women, then gathered, grouped and sent the completed sets out to all of the participants. Each doll is hand-painted by another family and bears the name of a saint and his or her feast day at the bottom. The dolls can be displayed or used in children’s play. Several other swaps have been organized since the first.

“Knowing they were created by other families who love the saints as much as we do makes them extra special,” said Stangeland. “It was fun to see how each person put their talents into depicting their chosen saint.

“Because rural people are a dwindling part of our population, it’s really interesting for me to look at how people are using their Facebook pages as kind of education for non-rural people,” she said. “It’s a good way of normalizing something that a lot of people don’t have contact with anymore: rural life.”

A blogger from northwestern South Dakota manages the Just a Ranch Wife Facebook page, which contains daily posts about activity on a ranch.

“It’s a way of just kind of tracking the day to day patterns of rural life,” said Redlin. “A lot of people view Facebook as a way to be ambassadors for rural life and rural people, to try and make sure that people understand (what) rural life … is really about, because there are so many stereotypes.”

Another page, My Life in Williston, North Dakota, Redlin said, discusses the effects of the current oil boom on economic and other factors in that community.

“It becomes a kind of clearinghouse for information when people are trying to make decisions about where to live,” she said.

Some communities even are utilizing “crowd” or online funding mechanisms to spur rural development and help grow small businesses.

In the end, though, Redlin said the ability of social media to reach people—whether connecting rural people to one another or the outside world—comes down to accessibility.

“(We have to) make sure that everyone has the same access,” she said. “We do have issues with broadband and … some of our deep rural areas still are not part of full engagement of this, and it’s simply because of difficulty in accessing good internet.”