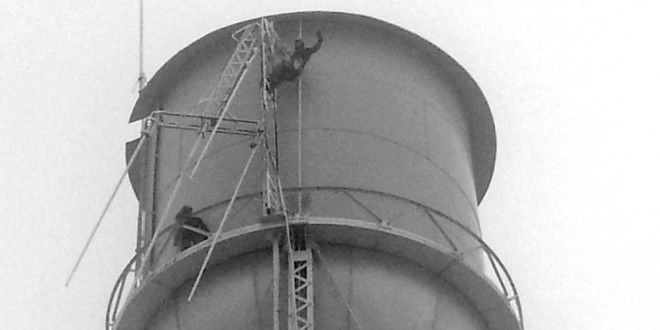 Sioux Falls Tower and Communications were on the job last week fixing the antenna the Clark County Ambulance and local Fire Departments use. Here, crewmen take down the old tower on Feb. 4. Photo by Clark County Courier

Sioux Falls Tower and Communications were on the job last week fixing the antenna the Clark County Ambulance and local Fire Departments use. Here, crewmen take down the old tower on Feb. 4. Photo by Clark County Courier 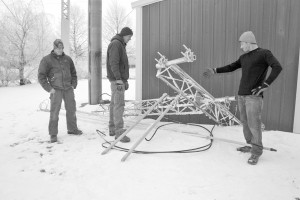 On left to right, are Josh Sieverding, Kenny Reed and Ben Geppert, shown by ‘the whip’ on the fiberglass antenna’s base they replaced. They returned to Clark on Feb. 5 to troubleshoot the antenna they replaced on the water tower. Photo by Clark County Courier

More than bird were perched on Clark’s water tower during the week of Feb. 4 as workers repaired the antenna located on the tower.

According to Clark County Sheriff Rob McGraw, the antenna that is attached to the water tower broke over the Feb. 2 and 3 weekend.

“Weather conditions were likely the culprit,” said Sheriff McGraw. “Probably a combination of ice and wind. According to the owner of the antenna tower, it was attached to the water tower in the 1970s.”

Three of these antennas were for radios that local farmers had used and were not being used any more, McGraw said, but one of the antennas was for the Clark County Ambulance.

“This ambulance radio is also used to page the Clark Ambulance and the Clark Fire Dept. and all county fire departments,” the sheriff said.

Repair work was done by a “tower crew” from Sioux Falls. On Thursday of last week, the damaged section was taken down and repaired, and the ambulance antenna was replaced.
This repair work is ongoing but should be completed soon.

“We are still working on getting the radio up and operational,” said McGraw. “We thought we could use the old antenna, but we are finding that it may have been damaged when the tower broke.”

McGraw noted that this repair must be done very quickly because the section that was broken was hanging by only the antenna cables and is a safety issue, as it could fall at any time. Secondly, the county ambulance radio was not operational to page out the ambulance and fire departments.

“In the meantime, calls for service have continued uninterrupted by use of the cell phones and state digital radio system,” McGraw said.