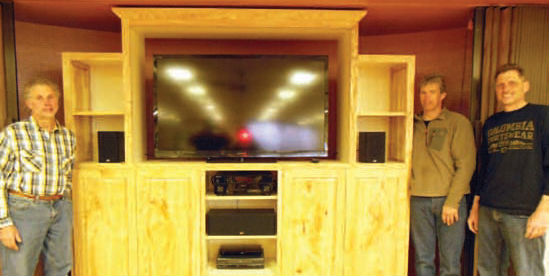 Trees are salvaged from flooding

With more and more trees from across the county going under water, three local men have decided to put that timber to use.

Robert Gruba, Mike Bergquist and Randy Mount have been working to rescue trees from flooded areas the last several years. They then cut the trees into lumber and do building projects with them.

The most recent project they’ve completed is a home entertainment center for Bethesda Home in Webster.

The boards for this particular project came from an old ash tree that had gone underwater near Waubay. The men had salvaged that tree about two years ago.

Bergquist had brought a sawmill from Minnesota that the three used to cut the tree into boards. The boards then had to dry for three months in a homemade solar unit. The timber took about a year to condition.

It took the three men about three days to build the entertainment center. They installed it at Bethesda on May 1.