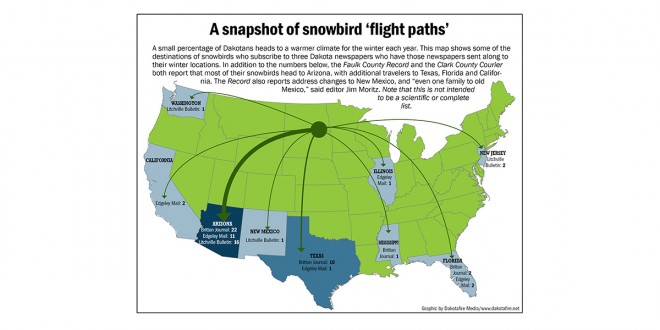 A small percentage of Dakotans heads to a warmer climate for the winter each year. This map shows some of the destinations of snowbirds who subscribe to three Dakota newspapers who have those newspapers sent along to their winter locations. Graphic by Dakotafire Media / www.dakotafire.net

Words such as these are what send a portion of Dakotans to wait out winter in warmer climates.

However, the percentage of snowbirds in Dakota communities is quite small, if an informal survey of Dakotafire participating newspapers is any indication: Only about 1 percent of subscribers to those newspapers change their addresses for the winter.

Some might give them other birdy names—“chicken,” if we’re feeling good about our own winter toughness, or perhaps “lucky ducks” if we are not. Whatever we call them, while those folks are away, we’ve taken a look at the trends in snowbird travel in our area.

Who are the snowbirds?

“Almost all snowbirds (who I am aware of) are retirement age,” said Bill Krikac, editor of the Clark County Courier.

While that holds true for most snowbirds, a few have figured out how to fly (or drive) south while still working for a living. One business owner in Edgeley has his son run the business while he is away, explained Patty Wood Bartle, editor of the Edgeley Mail. Another Edgeley couple can get away because the husband’s work is seasonal and the wife’s job is flexible enough to allow for a few months away.

One change that has made long winter getaways possible is the increase in farmers without livestock. Tractors and combines don’t require feeding over the winter, so after the harvest is in, farmers can take off.

“Because we are an ag community, there are several people who have not retired but leave after Christmas and return in time for spring work,” Bartle said. “They are empty nesters, typically between 50 and retirement age.”

Doug Card, editor of the Britton Journal, said a few farmers in the Britton area leave for the winter months. A few other working-age people have found another way to make a warm-climate getaway work: Use that home as a rental.

“We have several younger people that have bought homes in Arizona that don’t stay down all winter but rent out the homes part of the time,” Card said. 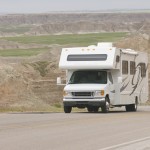 With the help of a S.D. business, many RVs traveling the country have a South Dakota permanent address. See the story here.

When do they leave?

The timing of departures varies considerably, the newspaper editors report.

“Seems like they leave at different times—some in October, some November, and a few wait until after Christmas,” Card said.

In Faulkton, spending Christmas in South Dakota seems to be more of a priority, as most snowbirds wait until after Christmas to depart, according to Jim Moritz, editor of the Faulk County Record.

Krikac describes the migration time of the Clark-area snowbirds with holidays: Most are gone Halloween to Easter, while some are gone from just Thanksgiving to St. Patrick’s Day.

Some delay their return date until they are sure Old Man Winter has gone.

“We have actually received some calls in the spring on what the weather was doing when people were deciding when to come back,” Card said.

Where do they go?

The most popular snowbird destination for area newspaper subscribers is Arizona by a wide margin. Among the newspapers that provided specific numbers for their snowbird addresses, more snowbirds went to Arizona than to all other states combined.

Reasonably priced housing and a dry climate are two of the reasons that retirees say they prefer Arizona, Card reported.

Other common destinations are California, Florida and Texas.

Not everyone goes south, however. One Dakota snowbird spends the winter months in Washington state, and another goes to Illinois. And a few Litchville-area snowbirds simply travel to larger communities in North Dakota (Valley City or Fargo). Some of those short-flight snowbirds might just be avoiding the responsibility of moving snow or the difficulty of winter travel in a rural area, or they may be taking advantage of an opportunity to spend winter with family (who can do the worrying about the snow).

What happens to their homes when they are gone?

The key for most arrangements is neighbors helping neighbors, looking after the empty house while the snowbirds are away.

Sometimes other arrangements are made, however: “One of our snowbirds who lives in the country lets the sheriff know and they patrol past there sporadically,” Bartle said. “Some hire people to clean driveways, sidewalks … Some have family members check on their homes or farms.”

Snowbirds also need to manage their services for their homes while they are away.

“Off the top of my head I’d say we have about 10 households in town that either switch off their service or simply by the basic fee in advance for the winter months while they are away,” said Sallie Traver, Faulkton City Finance Officer.

Are there more or fewer snowbirds?

U.S. census data does not track annual migrations, so figuring out the trends of snowbirds requires looking for data in different places: For example, a survey by PulteGroup, a company that builds adult retirement communities, suggested that fewer people nearing retirement are planning on becoming snowbirds.

An official from PulteGroup suggested that the change in plan may be because fewer in the Baby Boom generation are planning to officially retire, instead working part-time or starting new businesses later in life.

Snowbirding happens during a stage of life when responsibilities of child-rearing or work are less and health is good—which means that people can age out of being a snowbird.

“Many snowbirds get to a certain age (or health) and don’t continue to go south,” Krikac said.

“I’d say that our number of snowbirds we serve is generally on the decline, but that’s because of our aging population rather than any other factor,” Moritz said.

When the snowbirds decide not to migrate anymore, we might call them “pheasants”—at home in Dakota country. 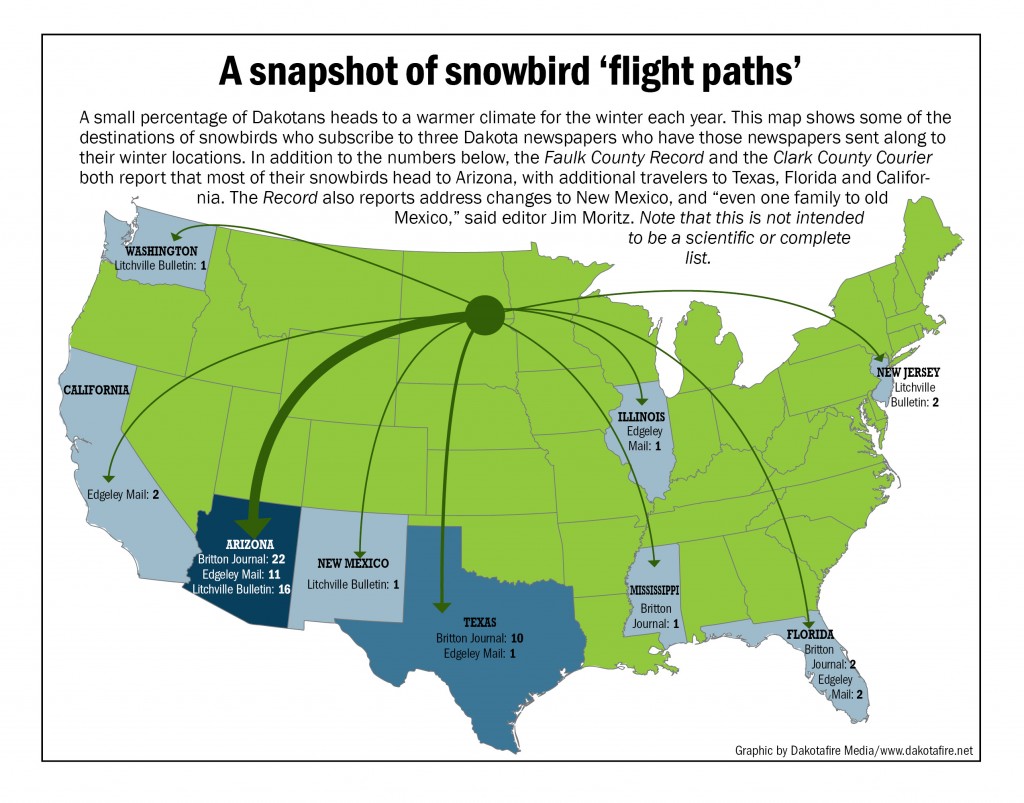 A small percentage of Dakotans heads to a warmer climate for the winter each year. This map shows some of the destinations of snowbirds who subscribe to three Dakota newspapers who have those newspapers sent along to their winter locations. Graphic by Dakotafire Media / www.dakotafire.net