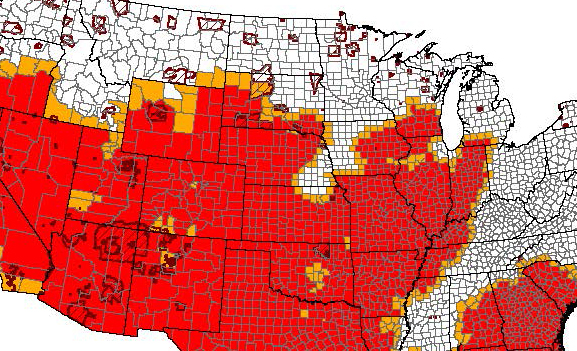 The USDA declared 218 more counties as disaster areas on July 31, bringing the total to 1,584 counties. See the full map here.

From The Rural Blog:

More than half of U.S. counties are now disaster areas, 90 percent because of the ongoing drought that has been brutalizing the nation. That brings this year’s total to 1,584 counties in 32 states, reports Michael Muskal of the Los Angeles Times. The latest disaster designations, made Wednesday by Agriculture Secretary Tom Vilsack, were in Arkansas, Georgia, Iowa, Illinois, Indiana, Kansas, Mississippi, Nebraska, Oklahoma, South Dakota, Tennessee and Wyoming.

The South Dakota counties that were designated as disaster areas on July 31 are:

See a national map of the drought disaster counties here, and information from the UNL’s Drought Monitor here.

The USDA also released about 3.8 million acres of conservation land for grazing and haying.