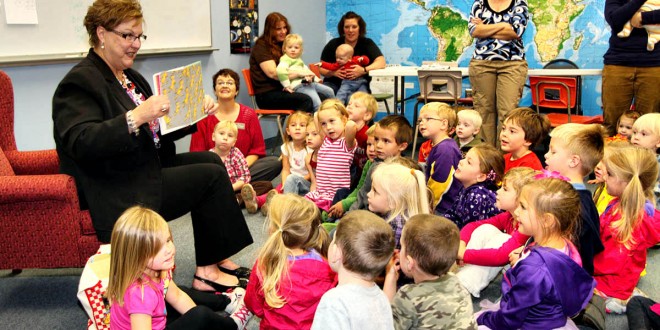 South Dakota First Lady Linda Daugaard read to children at Britton’s Library on Oct. 3, when Britton was Capital for a Day. Photo by Britton Journal

At a time when the news could be pretty bad coming from rural libraries in the James River Valley, many area communities report that their libraries are holding their own or even thriving:

Nationwide, the report from rural libraries is not so upbeat. In the face of a dire financial situation, “library administrators and trustees are grappling with incredibly difficult decisions to reduce services, programs and staffing,” according to a presentation given at the Association of Small and Rural Libraries conference in September. When budgets are tight, local government officials sometimes question the relevance of libraries in an increasingly digital world.

One of those struggling community libraries is in Groton. “I feel that our library is holding its own right now, but we have also cut some services,” said Anita Lowary, Groton’s city finance officer. “Each years it is a struggle to continue funding for this service. … We were already advised by the state to consider reducing our status from library to reading room, but we want to continue to be a library.”

Finding funding is difficult in Groton now, but there and elsewhere in the James River Valley and in the Dakotas more broadly, communities still value their libraries.

“A public library helps keep the status of the community on an intellectual level and provides a wonderful pastime for many people,” Lowary said.

It can also be a place where people can gather on neutral ground.

In the Dakotas and elsewhere, the costs that rural libraries have to pay are going up: “Books cost more—anything you want to do costs more,” said Annie Brunskill, past president of the South Dakota Library Association.

Other costs affect libraries as well: Utility costs  can strain library budgets, and so can postal increases, because interlibrary loan book exchanges are done through the mail, Peterson explained.

The funding that libraries receive from their local governments often doesn’t go up quite as quickly as costs do, and with the nationwide economic slowdown in recent years, some budgets have been cut. The budget of Brunskill’s home library in Philip, S.D., for example, was trimmed a year ago, and Groton lost a significant part of the funding it used to receive from the county when the bookmobile was still in service.

But that’s not the case everywhere. In most communities in North Dakota, a statewide budget surplus has helped local budgets as well. “I haven’t really heard of anybody getting a really big cut,” Peterson said.

Librarians in Britton, Faulkton and Clark all report that city funding has held steady, and even if costs are rising, frugality is a mindset they know quite well.

“We sometimes have to be thrifty in our book purchases,” said librarian Judy Dixon of Faulkton.

But rural libraries have another source of funds if the regular budget isn’t enough: The users themselves. When community members see a need, they often step up to fill the gap—avid readers in the community often donate new books right after they have read them, and area librarians report their recent fundraisers have been quite successful.

“People are so generous. It’s unreal,” Satrang said of her Britton community. “We also have had a couple substantial donations from people that have passed away.”

The population of many rural areas is going down, and bookstores in larger areas have closed, which might lead a person to guess that rural libraries have fewer patrons than they used to.

“The number of people using them has gone up,” Brunskill said.

In 2011, 23,000 patrons came through the door of the Britton library—impressive for a county with a population of about 4,600. (Each visit is counted separately, so some of those are the same person a number of times.)

Hensely said the number of patrons at the Clark library has gone up lately. “We’ve had more kids coming in since school started and I’ve been doing regular story times,” she said.

Another factor is that the world expects people to have online access, so if they don’t have Internet at home the library serves that need. For example, people looking for jobs search for openings online, and many employers prefer online applications now, Brunskill said.

Peterson added that as people manage their own budgets and see the cost of books and other media rising, they often opt to check out books or DVDs from the library instead of purchasing them.

Some patrons have also realized they can get just about anything they want through interlibrary loan. They may not have cable, but if they want to see the TV show “Dexter” (a Showtime channel exclusive), they can request full seasons from their library, Peterson said.

As library patrons pick up e-readers such as Kindles and Nooks, librarians have done what they can to serve those new readers of e-readers.

Libraries in both Dakotas have joined statewide consortia to get e-books at better prices. “We pay a fee, and people can bring in their e-readers and check out books (at no cost),” Satrang said.

One of the challenges for library patrons and librarians themselves is knowing how to use and make the most of the new technology. Librarians have come to expect a flood of questions in the days after Christmas as people try to sort out how to use the e-readers they received as gifts. Some have held training sessions just for the use of e-readers—in Clark, 22 people attended a recent South Dakota Titles To Go class.

And if librarians need training themselves on these topics, the state library associations offer that, Peterson said.

Not all rural libraries are able to offer e-books yet. Groton, for example, needs to upgrade their equipment before they can offer that service, Lowary said.

“If you have a small budget, it’s kind of out of reach,” Brunskill said. “We have to balance the cost of e-books against hardcover books.”

Libraries also serve as a place for the public to use the Internet, and setting up that system can take technical expertise that many librarians don’t have. Money from the American Recovery and Reinvestment Act has funded broadband initiatives nationwide that can help with that.

In South Dakota, the S.D. Broadband Initiative provides a free technological assessment for all community anchor institutions, which includes libraries but also applies to city offices, health care facilities, YMCAs and more. Then those institutions can apply for a grant to help with needed technology upgrades. In North Dakota, the state library offers grants for the purchase of new equipment, and Library Coordinating Council offers grants particularly targeted toward rural libraries.

(See our story about the S.D. Broadband Initiative here.)

A role for the foreseeable future

Overall, rural libraries in the Dakotas are holding their own or thriving—but there are some that are struggling. Brunskill said the difference is sometimes related to declining population, but the effort of the people involved matters more to how the library is doing than numbers do.

“If you’ve got people who really, really think highly of their library, it doesn’t matter whether it’s a small town or medium-sized town, that library going to get a lot of support from that community,” Brunskill said.

Pretty good—or even great. Many rural libraries are serving an important niche in their communities, as a social gathering space as well as a place to gather information. The librarians in Faulkton, Clark and Britton all say their libraries are thriving.

“We’ve had a lot of good comments from people coming through that we kind of shine when it comes to our library,” Satrang said. “We have the community to thank for that.” 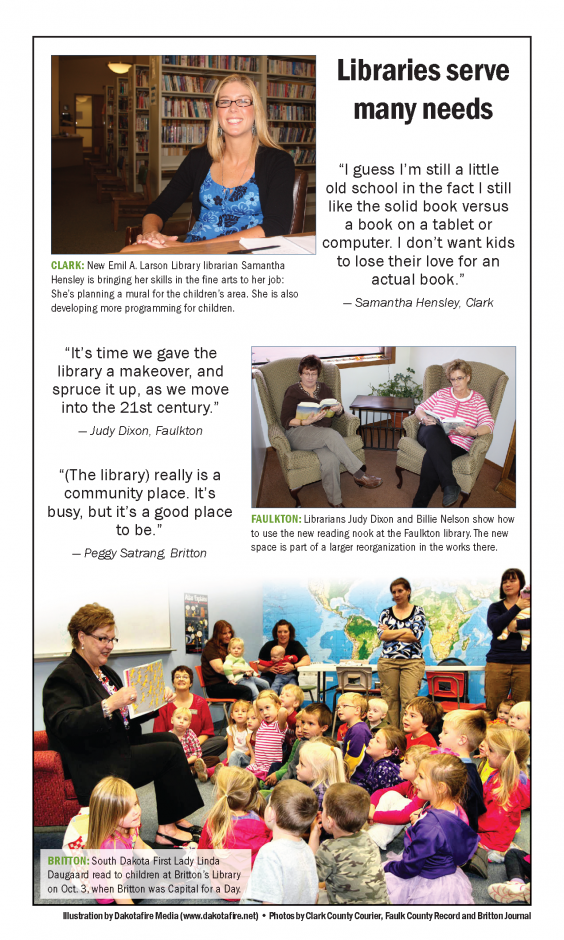