One hundred fifty to one hundred seventy-five miles of transmission line is being planned somewhere in the Dakotas. The Big Stone South to Ellendale route is in the running as an option. A public hearing was held Monday at the Groton High School gym as members from Otter Tail Electric and Montana Dakota Utilities, the owners of the project, were on hand to visit with landowners.

Mark Hanson, a project spokesman, and Dean Pawlowski, project manager, were the facilitators of the presentation. The 345 KV transmission line will cost $300 million to $340 million to complete and once construction begins, it should take three years to complete, becoming energized in 2019. This is one of 17 projects that is expected to be built in the upper Midwest.

The big issue at hand is that the current transmission system is getting full. This new line will increase capacity. It will off load the smaller transmission lines so that new wind generation facilities can be hooked up through the smaller lines. The 345 KV line is too big to add more generation. The design process should take until 2016, but Pawlowski said that the final route application should be submitted to the South Dakota Public Utilities Commission by late spring or early summer.

“Be patient as we work through the process,” Pawlowski said. “We think we can work with the landowners. We rarely use Eminent Domain.”

It was questioned why the line would not be dug underground, given current technology. It was pointed out that due to the size of the line, cooling stations would have to be added every quarter to one half mile and that would make the project eight times more costly. 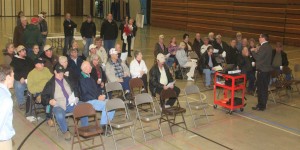 Both landowners and other interested people were in attendance. They had a chance to comment, make suggestions and review proposed routes.