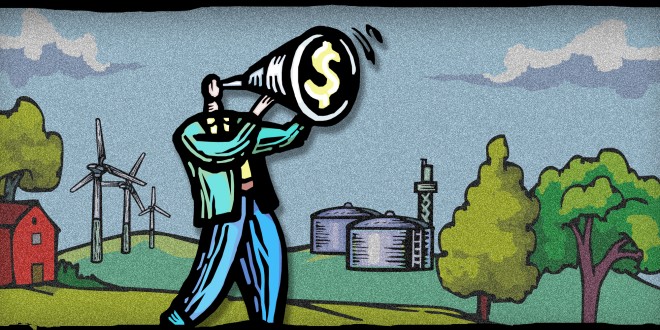 One job that could lead to more: Hiring economic development staff

At a meeting in November, leaders in the Clark community decided they needed to take their economic development game to a higher level.

Clark School Superintendent Brian Heupel had initiated the meeting, which pulled together the members of six organizations in the community to talk about how they might work together to help the community grow.

“It seems as if at some point, we as a community need a development director to try and move the community forward,” Heupel said. The groups formed a task force to research how to organize for, fund, and hire for such a position, which is due to issue their report March 1.

Hiring an economic development director can bring definite benefits to the community, according to several economic development leaders in North and South Dakota. But they stressed that it’s not a silver bullet, and communities should realize that this step needs to be part of a larger strategic process if it’s to be successful.

“It puts that economic development mindset in your head all the time, instead of always shoving it to the back burner,” Jensen said.

Establishing a paid position for economic development can also help communities avoid one of their perpetual problems: volunteer burnout. When only one or two people are working on economic development, if they burn out, “all work ceases,” Jensen said. If instead a paid economic development person leaves the job, a structure is in place to hire someone else, and the torch can be passed on more easily.

The move to hire someone can also serve as a catalyst to focus economic development efforts. Glacial Lakes Area Development, for example, brought together development groups in Britton, Pierpont, Veblen, Eden, Lake City, and Langford and strengthened and focused their efforts, Jensen said. Moreover, GLAD now has the financial support of all those communities (as well as from Marshall County, grants, private donations, and fees for services), ensuring that their efforts will continue well into the future.

For example, Grow Spink focuses a good deal on housing, and On Hand Development Corporation in Miller has created and advertised incentives to get people to move to the community. 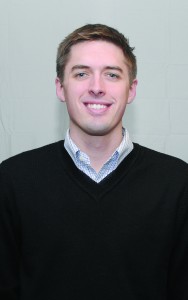 Recruiting businesses from elsewhere is not the main focus for most economic development groups in the area, though Webster is a notable exception. With new energy from executive director Nick Fosheim, hired at the end of 2010, the Webster Area Development Corporation has hit the gas on an effort to bring new businesses to the community. The corporation has connected with a Winnipeg, Canada, interest that may relocate to Webster, and facilitated the sale of the Roslyn school with a Minneapolis-based company. Most recently representatives attended the SHOT show in Las Vegas to connect with hunting and fishing companies, which may identify with the outdoor recreation culture in the Dakotas.

“We’ve laid the foundation for some exciting work in 2012,” Fosheim said at the WADC annual meeting in January.

For the most part, economic development groups are focused on helping the businesses that are already in the community, Jensen said.

Scott Amundsen, executive director of GLAD, makes sure that businesses know about the services the organization offers. A revolving loan fund is one of GLAD’s success stories: To date, the fund has loaned $200,000 to nine different small businesses in the GLAD area, which has resulted in more than 50 jobs either created or saved. GLAD has also helped businesses with succession plans when the current business owner is ready to move on, or helped with hiring if the business needs to expand.

Money for the long haul

Groups that want to hire an economic development director often think of grants first as a source of funding, and NESDEC has helped several communities receive USDA Rural Development money for economic development work. But Jensen warns that it’s not like winning the lottery — they won’t be set for life.

“Grants are great, but you can’t survive on them and you can’t depend on them to be there,” Jensen said. “A lot of communities just think … a grant’s going to be their saving grace, and it’s not.”

Instead, successful economic development efforts generally seek funding from local sources, according to Paul Lucy, Director of the Economic Development & Finance Division of the North Dakota Department of Commerce.

Typically, funding comes from a combination of these, or, better yet, from all of them. “It has to be community, business, county, city — I think you have to have all of those pieces,” Jensen said.

If a community is trying to find the means to hire an economic development director, it may help to look down the county road for allies.

By thinking regionally, “you can maximize limited resources,” Lucy said. “If you’re looking a number of rural communities that have some commonality in terms of industry sectors or transportation or just regional common interests or common attributes, it might make some sense to do that.”

Commissioner J. Pat Costello of the S.D. Governor’s Office of Economic Development pointed out that regional and community economic development efforts feed off one another.

“In general, what’s good for a community is also good for the region and vice-versa,” Costello said. “The more jobs in any given area, the more money that gets recycled in the community and surrounding communities.”

But how can the group ensure that the director is truly working for the good of all the communities involved? Won’t the county seat towns always fight for businesses to come there, for example?

The key, Lucy said, is to make sure the structure and purpose of the organization are very clear, that all communities are represented in the decision-making process, and that there’s an understanding of open dialogue between members.

Using the example of the state of North Dakota’s economic development efforts, Lucy said they try to present the attributes of the various communities in the state, and then it’s up to the communities to sell themselves to the business. The business then makes the final decision of where it fits best.

“As a result, more communities can afford to attend the trade shows and get the collective ‘South Dakota’ message out,” Costello said.

Once organizations have started working together, other partnerships start to emerge. If a business looks at Britton and sees that it’s not going to be a good fit, those in Britton might send the business to look at Day County.

“We have seen it happen,” Jensen said. “The mindset is starting to change. We’re not all so independent, because we know we can’t be.”

“We’re going to be working for the best-case scenario for all involved,” Jensen said.

The new Prairie Gateway website should launch in June. For more information about the program, contact the NESDEC office.

It might not be easy to think regionally, but it is necessary if groups are going to be effective, said Amundson of GLAD.

“I really think that rural communities need to rely on strong partnerships to broaden the swath of what we’re able to do,” stressed Amundson.  “We need to focus on the greater good of the region.” 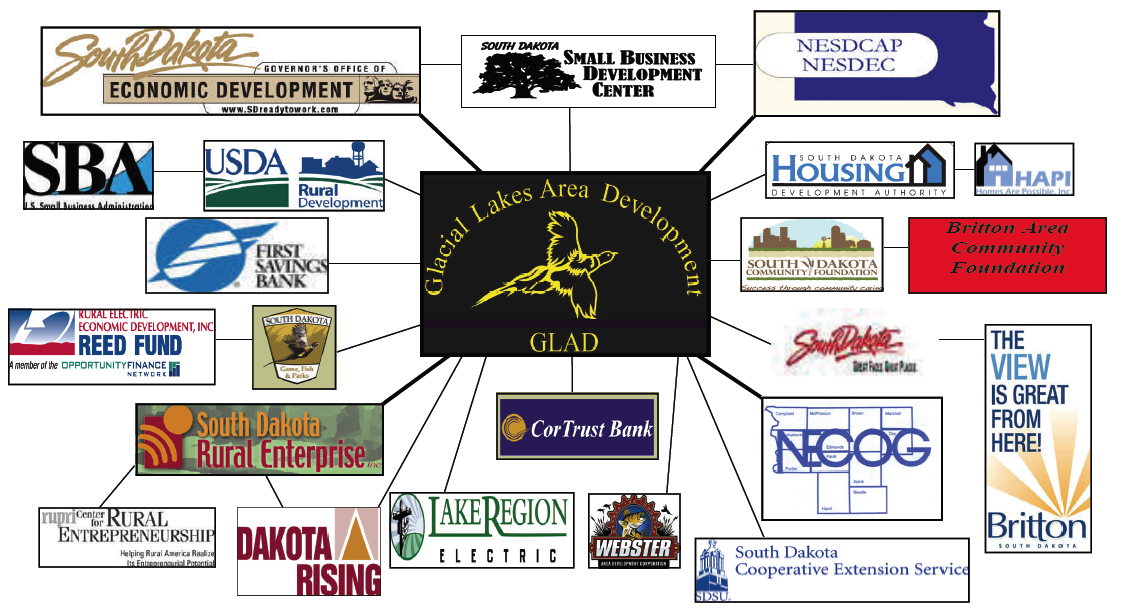 An example taken from a GLAD presentation shows how their vast network engages many South Dakota agencies and companies.

Are you ready to hire an economic development director?

Consider these words of wisdom before you begin:

Not ready to hire yet? That’s OK. There are other ways to enhance your community’s economic development efforts.

One of those is the Dakota Rising program, sponsored by South Dakota Rural Enterprise, which “strategically partners with local communities to invigorate rural entrepreneurs and their enterprises,” according to their website.

The Glacial Lakes area is one of the sites selected for the program, but so is Faulkton, where economic development is an entirely volunteer effort. Two Faulkton businesses were accepted as Dakota Rising Fellows in 2011, and seven more are applying to take part in 2012. Fellows are mentored in ways to take their business to the next level and also receive grant funding to help jumpstart their new business plan.

Interested communities can learn more about the Dakota Rising program at dakotarising.org.