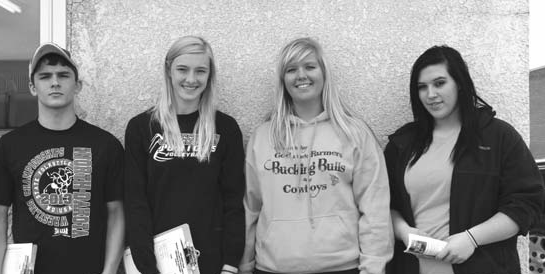 The LHS Green Team has been trying to get a recycling program in the city of LaMoure.

They attended the April 1 city council meeting to present information on recycling. They would like to leave the town of LaMoure a better place for future generations. The following is a summary of the information the team presented.

For their Ecology class, the Green Team completed a garbage lab which consisted of going around the school, taking garbages and sorting through them. Their results were that 98% of the garbage was recyclable, 92% was paper, 1.2% was food, and only 0.3% was non-recyclable. One tree makes 8,333.3 pieces of paper according to Susan Kinsella, Executive Director of Research and Communications for Conservatree Paper Company.

What will recycling cost?

At a maximum, it will cost around $4.00 a month, or $48.00 a year, for every household. However, recycling could decrease the volume of our city’s garbage, which would possibly decrease each household’s garbage bill. For example, SuperValu’s garbage bill used to be $400.00 a month, and after they started recycling it dropped down to $80.00 a month. The recycling would be collected once a month; there is no sorting necessary. Each household would be supplied with a 96 gallon tote to hold the recyclable items.

Recycling won’t just help keep waste out of the landfills; it will also help the environment with air pollution. It will help because many local people transport their recycling to other places, and a recycling program in town would eliminate the need to transport it.

The students said that they would be willing to help educate the public and listed some of their ideas to do so.

The ideas they had were: going to the senior center to educate the older people about recycling, holding an event at the school during different times of day to accommodate schedules, have LHS students fulfill community service hours by helping the elderly with their recycling or by educating, having monthly newspaper articles and bringing other organizations in like 4H and Girl Scouts. They have already presented a program to elementary students about recycling.

The city council asked the students to do a survey and present the results at the May 6 meeting.

“We are willing to help the city council in any way possible to get this matter before the townspeople,” Kennedy Witt said.