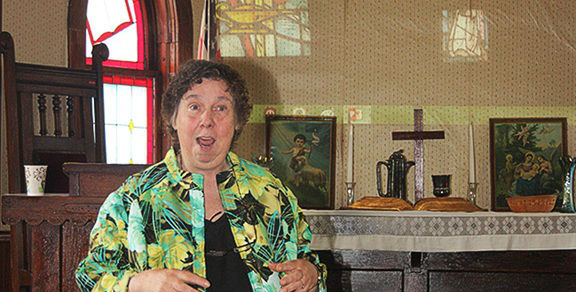 Dr. Barbara Johnson from the South Dakota Humanities Council Speakers Bureau gave a presentation at the Crandall Church during Heritage Day on Sunday in Clark.  She traveled around Clark County the last two weeks, taking pictures and gathering history from churches and residences of their stained glass windows. This added to her presentation along with showing the PBS special Light of the Prairie, featuring stained glass windows in South Dakota.

“You have a lot of treasures in your county. I was very impressed with what I’ve seen visiting churches and buildings these last few weeks,” SD Humanities Council speaker Dr. Barbara Johnson stated.

Dr. Johnson, of Aberdeen, spent the last three years looking at thousands of windows in South Dakota, making a report to be used for the Light of the Prairie special that was recently on South Dakota’s Public Broadcasting station.

“Look again at the stained glass windows in your church – you might notice some little thing that you didn’t notice before. Like in the painting ‘Christ in Garden,’ where Jesus is praying in the garden of Gethsemane. In the background of some are three disciples sleeping you may not have noticed before.”

The First Presbyterian Church in Raymond, St. Paul Lutheran and the Plymouth Congregational Church have this stained glass window of ‘Christ in Garden.’  At St. Paul Lutheran it is easy to see the three sleeping disciples.

“I was totally blown away by the three large windows at the Presbyterian Church in Raymond. Their ‘Christ with the Children’ window was historically sometimes dedicated to the pastors of their church, signifying that we are all children of God. Jesus with his sheep signify we are all like lambs of God and Jesus is our shepherd.

“Usually big paintings on glass like this were not signed. But then, some were. On the ‘Christ with the Children’ painting in Raymond, you could faintly read the signature McNutt. That name was synonymous with the Ford Brothers Studio in Minneapolis, Minn., which was famous for their stained glass work. They later merged with Pittsburg Plate Glass in Winona, Minn.”

Jim Hurlbut added that his great grandfather had a hardware store in Raymond in the early years and had relatives in Winona, Minn. He’d been told that they got a break on the price of the windows with these connections.

“Stories handed down like that are sometimes the only sources of information on some of these windows and their histories,” stated Johnson. “Your Clark County Centennial history books were very helpful. Not all churches kept a good written history of their windows, and some were lost in fires over the years.

“The University of Minnesota has a special NW architects archive department that may be helpful as many of these windows in area churches came from Minnesota glass window companies. They came by train to this area which would date them after the 1880’s.

“Often the windows reflect a combination of images put together and some are quite unique.

“At St. Michael’s Catholic Church for instance, in the window of Saint Isadore, Patron Saint of Farmers, I noticed potatoes. Potatoes were a big deal around here I understand,” chuckled Johnson. “That’s the first time I’ve seen potatoes in stained glass. Corn and wheat are often used. Wheat also represents the bread of life. I was on overload with all of the nice theological windows in St. Michael’s. They were really quite unique. I noticed a Guardian Angel and the cookie jar, too. And, even some playful images like a little mouse.

“’Christ knocking at the Door,’ like the window at the Plymouth Congregational Church represents that it is up to us to open the door and let him into our lives. There is no handle on the outside where Jesus is standing and knocking. It is only from us taking action on the inside that opens the door to let him in.

“’Rock of Ages’ is another common lithograph that was made into a stained glass window. It says life is tough, but we have Christ to see us through.

“Stained glass was designed to touch the soul.  Each piece has a story to tell.”

It’s a sad fact that churches are lost over time and have had to rebuild. The more modern churches such as the United Methodist Church in Clark have colorful windows to enhance their worship space. The St. Paul Lutheran Church has many scenes that portray the life of Christ.

Windows telling the story of creation and Christ’s crown over the cross are at the Garden City United Methodist Church.

Colors like red represent royalty, blue is usually used to represent Mary and purple represents passion or of the earth. Different metallic oxides are added to the glass to make the vibrant colors. Gold or selenium was added to make red, cobalt makes blue and cadmin makes a yellow for example.

“The state capitol in Pierre has a lot of art glass and murals. Above the front door is a memorial window to honor Governor Mickelson which has eight sections to honor the eight who perished in the 1993 plane crash.

“The piercing of the sun through the windows reminds us that there is hope for another day. Even if one was illiterate, the windows communicate something divine. When the world is dark and ugly, the window’s beauty can raise you up. It raises the mind and the heart to something that is beautiful,” he said.