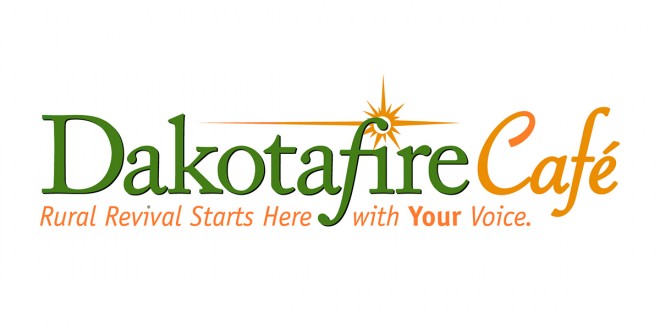 The first in a new series of events intended to spark community and regional conversations will be from noon to 2 p.m. Friday, March 28, at the Marshall County Community Building in Britton, S.D.

The event, called a Dakotafire Café, intends to get people talking about the topics presented in the latest issue of Dakotafire magazine, according to Dakotafire Editor Heidi Marttila-Losure.

“Most of our small towns have a place where locals gather to solve the world’s problems over a cup of coffee,” Marttila-Losure said. “These events are intended to bring that spirit of problem-solving conversations to the issues that affect our communities—which are the topics we try to address in the magazine.”

The format of the event will include lunch, followed by a short presentation from a speaker who was a source for some of the stories in the magazine.

Mike McCurry, South Dakota’s state demographer, will present information on commuting patterns in South Dakota and what they might mean for efforts to sustain and improve rural communities.

That presentation will be followed by conversations in small groups, and finally some sharing of insights from those conversations with the larger group.

Joe Bartmann, a rural advocate from Montrose, S.D., who has worked as a facilitator for similar conversations in other settings, will help guide the process.

The event begins at noon and will go until 2 p.m. It takes the place of Britton’s monthly community roundtable discussion in March, which normally only takes an hour, but for this one month, attendees are asked to make an effort to stay for the whole two-hour process.

“I think the conversations will be enjoyable in themselves, and hearing the insights that we come to from the conversations—what I think will be the most rewarding part of the process—won’t happen until the end of the two hours,” Marttila-Losure said. “Just put a sign on the door—tell your customers to come on over for the conversation, too!”

A video of the event will be made and will be available online, and a story about the event will appear in the next issue of Dakotafire. The conversation can also continue at www.dakotafirecafe.com, which will soon have a link to an online forum space.

The Dakotafire Café events build on the work done by the Dakotafire project, which brings together community newspapers in the James River Valley of the Dakotas to address topics important to the region. Dakotafire stories can be found in participating newspapers, on www.dakotafire.net, and in the bimonthly magazine.

The next Dakotafire Café event will be in Webster on May 29, following the May/June issue of Dakotafire, which has water as its theme.