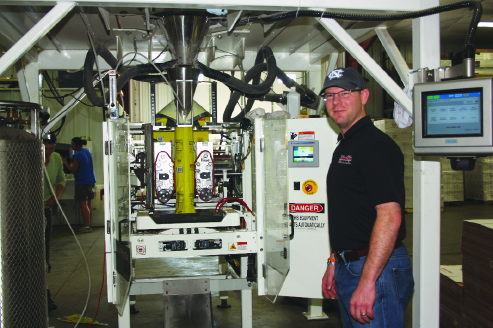 Dakota Style is spitting out sunflower seeds all across the nation

Riley Dandurand, general manager of Dakota Style, is shown near a sunflower packaging machine at the Dakota Style building in the Clark Industrial Park. In the background are employees Terri Bremmon and Katie Wangsness. With 25,000 points of distribution, sales have increased dramatically, and the company is expanding, adding second shifts at both the potato chip plant and the sunflower seed packaging plant. The packaging plant opened in February.

By the Clark County Courier

Dakota Style continues to put Clark, S.D., on the map—most recently with a booming business in sunflower seeds and kernels.

A new warehouse/office space is now in use at the Clark Industrial Park, primarily for sunflower seed production. The Dakota Style brand started with potato chips, but sales of sunflower seeds have surpassed chips sales for the company.

“We’ve got a good product,” said Riley Dandurand, the general manager of Dakota Style. “Our distribution ratio is currently 30 percent of chips and 70 percent seeds (in the shell and kernels).”

Dakota Style revved up their sunflower seed expansion in 2006. “That was when my father brought me on board,” Dandurand said.

Dandurand’s father, Kevin Dandurand, purchased the business in 1998, and since then it has become a family affair with the addition of Riley as general manager and his brothers, Eric and Dustin, in sales. The Dandurands are originally from Aberdeen, and Riley, having come from Detroit and Toledo with a former job in sales for the 3M company, appreciates being back in South Dakota.

“I missed pheasant hunting, having people wave at you on the road, less traffic, among other things a person enjoys living in South Dakota,” he said. “Clark has been pivotal in our success. Everyone we have worked with here has done nothing but support us and work together with us to help with our expansion at the industrial park. We will always be based out of Clark.”

Dandurand, with a degree in psychology, biology and chemistry from St. Mary’s in Minnesota and a master’s in business from the University of Toledo, came on board to help his father with finance, production and marketing. Ryan Sheplak of Kansas City, Mo., was brought in to help with sales, having 20 years’ experience in the food business.

Later in 2009, Riley’s younger brother Eric came on board to help with sales based out of Minneapolis. He works with sales in the Minneapolis, Wisconsin and North and South Dakota areas. “He makes sure after we land an account, that it’s firing on all cylinders, per se,” Dandurand said. “He makes sure it is tracking like it’s supposed to be and that physically everything clicks.”

With the increase in sales, brother Dustin was also needed. He was formerly with 3M in Buffalo, N.Y., and Boston, Mass. He is now located in Des Moines, Iowa.

“From Canada to Mexico and from Denver to Chicago, that is our primary market area,” said Dandurand. Several national leaders in grocery stores and big chain stores are Dakota Style customers now. Grocery stores are the first market for sunflower seeds with the convenience stores marketed next.

Sunflower seed sales have taken off, with a 50 percent growth this year over the last year.

“Jumbo sunflower seeds are a big part of our expansion,” Dandurand said. “The jumbo seeds are easy to split and make a good cracking sound when split,” notes Riley. “It’s a nice big whole seed that’s not fragmented, and it is also salted on the inside, which is a tasty reward after cracking the shell.”

Sales of kernels (seeds without the shells) and sales of in-shell seed sales are split about evenly.

As Americans become more and more health-conscious, the seeds, which are rich in vitamin E and are a good energy source, have been a popular snack. Servicemen and women are among the most ardent fans.

“Sunflower seeds are extremely popular with the military. Our office is full of letters from military personnel,” said Dandurand. “The last two years we had donated 16,000 pounds to the troops in Afghanistan around Christmastime. We also have had a ‘chips for the troops’ program we offer on our website around Christmastime.”

In-shell, 16-ounce bags are the No. 1 selling seed in the country per point of distribution, meaning for every place is on the shelves, it sells better than the others, Dandurand said.

By the end of 2012 Dakota Style’s kernel sales will be national—all contiguous 48 states will have them. They also have in-shell seeds in Alaska.

For the last 18 months, the company has also been marketing kernels as a healthy salad topping, with the flavors of roasted, ranch, zesty and honey roasted. The products have been steadily gaining sales.

“We are also looking at complementary kernel products. The hardest part of this job is holding yourself back sometimes,” laughs Dandurand. “Execution is the name of the game—following through.”

The company currently has 14 workers at the original location northeast of Clark and five employees at the warehouse on Industrial Road in Clark. Their expansion calls for more warehouse space, more jobs and more lines of more flavors in the future.

“The chips continue to do great,” the Dakota Style general manager noted. Sales are concentrated primarily in the convenience stores with the smaller bag size showing good growth.

“First thing when I came on board, I added the new spicy flavors. I think Ranch is the new ketchup. Spicy Ranch is my favorite,” Dandurand said with a smile.

Dakota Style Chips was originally founded in 1985 by Bob and Betty Campbell as a way to subsidize a struggling agricultural market. The Campbells began producing open-kettle potato chips cooked in cottonseed oil, and their recipe continues of the plant. “If it ain’t broke, don’t fix it,” Dandurand says.

“We have had a great home here in this community, and the payoff will increase in the future with more jobs,” he said. “The company has now added a second shift at the chip plant to support its growth in chips the last three months. A second shift will also be added at the seed building in Clark in three weeks to keep up with the demand.”

Speaking of additions, Dandurand and his wife, Ashley, are expecting their own addition in September. Ashley is currently working at the Little Explorers daycare in Clark. The couple married at the end of last year with Ashley moving here from Burnsville, Minn.

“Having been away from it, I really appreciate being back in South Dakota and small-town lifestyle,” Dandurand said.