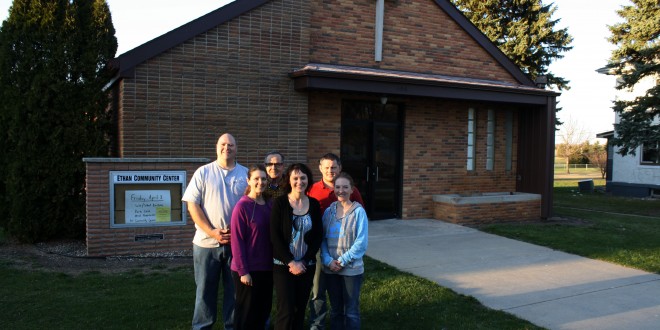 The community of Ethan, S.D., will come together Friday evening, to create a space for future gatherings in the town of 330 in southeastern South Dakota. The City of Ethan purchased the 4,800-square-foot building that housed the town’s Catholic church last year, to renovate it into a community center. Committee members (back row, left to right) Shane Comp, Don Jarvis, Marty Royston (front row, left to right) Leah Mellegaard, Michele Pollreisz, Annie Haag and Michelle Klumb (not pictured) will present their plans to the community and formally begin the process of raising funds for the renovation project. (photo by Wendy Royston, managing editor)

From baby showers to funerals and everything in between, community centers are where memories are made among neighbors in rural communities.

“The community center is the kitchen of the community, and I think that’s both literal and figurative in many instances,” said Tom Hurlbert, principal architect at CO-OP Architecture, based in Aberdeen and Sioux Falls. “It’s really about connection and creating a sense of community, and community then encourages each other and creates sense of belonging,” resulting in a sense of home. “I think that ‘home’ is probably the best asset for a rural community to retain residents and to use them to attract and involve those that have left.”

A desire for that kind of a common “place” inspired the community of Ethan, S.D., to transform the former Catholic church building into a community center. 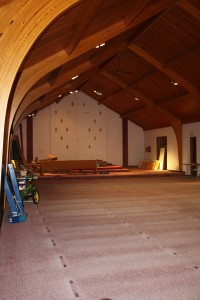 When Holy Trinity Catholic Church in Ethan, S.D., closed in 2014, a committee formed to renovate it into a community center. The building has been stripped of its church fixtures, and the committee hopes an April 8 event will spur the next step of construction. (photo by Wendy Royston, managing editor)

“There’s just not much left” for business or entertainment in Ethan, according to Shane Comp, president of the Ethan Community Center committee.

“We don’t have a café anymore. We don’t have a place where people just come and ‘be together’ anymore, unless it’s a sporting event … but there’s not much of a chance to talk to people at those things. … There’s got to be a place for people to gather, to rejuvenate your friendships with people, to keep these lifelines going.”

The city’s $10,000 purchase from the church included a 4,800-square-foot, 54-year-old building on 1.3 acres. It’s an opportunity for rejuvenation in the town of 330 people that has lost most of its businesses to neighboring Mitchell but has maintained a steady population and seen increased school enrollment in recent years.

“When you have a project like this, the community gets involved, (and) it reignites the spirit of the community,” Comp said. “People enjoy it. They look forward to what it’s going to be, because of the possibilities.”

Reutilization of pre-built spaces—such as in Ethan—is an opportunity to not only save money when developing a community center, but also build upon a community’s established heritage.

“Old buildings are landmarks that make ‘home’ home,” Hurlbert said. “The good memories of your youth are the powerful memories of ancestors. … That’s what creates a sense of place. And when you create that sense of place, you have that sense of belonging, of your roots, and hopefully that’s something that makes people want to be there or belong there, or even to come visit.”

The future of Onida, S.D., according to many in the community of 760, was reshaped when planning meetings for a new ethanol plant began in the city-run Phoenix Center in 2014.

The building’s name was chosen because it “rose from the ashes,” like the mythological bird, after fire destroyed a handful of downtown Onida buildings, including the hardware store, law and insurance offices, a local café, and the original community center on New Year’s Day 1993.

“The property was just sitting there, vacant” until the Onida Area Economic Development Corporation formed and made a new community center one of its goals, according to Sully County Commissioner Bev Zebroski, a member of Onida Senior Citizens.

Initially, senior meals were served at the Phoenix Center. That program since has moved to relocated to restaurants, but the center is a visual reminder of hope on Onida’s Main Street, housing the city office, a weekly quilting bee and various community events.

For some communities, creating a new community center is an opportunity to imagine a future from a fresh canvas.

“We need to find a newer, suitable location for the fitness center” that is in an older building that is costing too much to maintain, said Ipswich, S.D., City Finance Officer Amanda Anglin.

That conversation and a separate one on a community center have sort of merged.

The town’s most recent discussion centers on the idea of enclosing city’s outdoor swimming pool and including the fitness center and a rentable multipurpose room in the same structure.

“How feasible that is, we don’t know yet,” Anglin said, but “we’re getting more positive feedback from people in the community, because then you can use (the pool) year-round.”

The town of 960 hopes to keep larger events—such as wedding receptions—in a local space, rather than creating memories in Aberdeen.

“It keeps people in our community, and then they buy gas and they go shopping” in Ipswich, Anglin said. “It’s convenient for the people living here. If your daughter’s having a wedding dance, your family is here in town and not driving 30 miles.”

Though the price tag on creating a new building from scratch can be more than that of renovating an existing space, there are certain opportunities in starting fresh.

“I love the idea that you’re going to think about where it’s located in your community,” Hurlbert said, and help build on other things happening in town. “If you can parlay that into helping Main Street, to create more activity on Main Street when most of these Main Streets are struggling at creating activity, to me, that’s a great opportunity to do that.”

A labor of giving

The Fun After Fifty center is breathing life into Britton’s Main Street, but also to the rest of the community. Like many community centers, it is home to the senior citizens’ coffee, cards and socialization six days a week, but it also puts its over-50 members to work for community good.

A group of around 20 members of Fun After Fifty work five to six hours each week for local manufacturer Horton, Inc., packaging small hardware items and literature in exchange for a donation to the group.

“We have several people who have said, ‘if i didn’t have this to do on Monday and Tuesday, I’d have no reason to get out of bed,’” Erickson said, noting that the sense of purpose the work provides promotes physical and mental health among older members of the community. “This gives them an opportunity to get up and do something useful.”

And Horton benefits, too.

“They need us, because we’re cheap labor,” Erickson said. “We’re doing it without pay, we’re having a good time,” and all of the money goes back into community.

This year, the group will earn about $30,000, which will be used for building repairs, as well as to maintain other community programs, such as the food pantry and Glacial Lakes Area Development. As many as 23 organizations have received donations from the group in any given year, ranging from $200 to $8,000 each.

Last year, Fun After Fifty donated $42,000 toward a new ambulance, garage and training center for the local fire department.

“I think we make quite a significant impact on the community, and people feel good about it whether they’re working on it or not. … They feel good that it’s happening in their building,” Erickson said. “It’s really kind of an exciting things to be a part of. I really don’t know another senior center in the state that is pretty much self-supporting in that way. Most of them have help from the city or state, or have high dues.”

Erickson said other communities and businesses likely could benefit from similar relationships.

“We can’t say that we did anything special that made us successful, because we didn’t create Horton. They came to us” seven or eight years ago, he said. “We sort of fell into this. It’s like somebody was walking by and said, ‘we have this pot of gold, and we want to share it.’”

A second community center in Britton, owned by the county, serves separate purposes in the community. The Marshall County Community building houses the food pantry, Veterans Service office, Glacial Lakes Area Development and Extension office. The community center’s kitchen is home to the local senior meals program, and is rentable for various purposes, including 4-H, Weight Watchers and Cub Scouts meetings, as well as social gatherings.

Finding space when there is none

While the community of Hoven, S.D., does not have an official “community center,” the American Legion facility is available to everyone in town for rent. The building’s biggest room is available for large-scale events, such as weddings, concerts and reunions, while separate “ladies’” and “men’s” rooms can be rented independently for smaller-scale events, such as bridal showers, funeral meals, and meetings.

That facility was constructed in 1955, after fire destroyed the rail cars that had been renovated into the first American Legion Hall, and community fundraisers often have subsidized upgrades over the past 60 years.

The use of privately-owned buildings, such as the American Legion Hall in Hoven and the Fun After Fifty Center in Britton, for public purposes often happens in smaller communities as a collaborative approach to “penny-pinching,” according to Hurlbert.

“I think that’s a great idea, but … they need to do a really good job of setting the parameters to be sure that the community center is open to everyone,” he said. Like publicly-held centers, “the whole community should invest in it, and there should be some resources put into it by the entire community. … There needs to be an opportunity for the entire community to have access to this.”