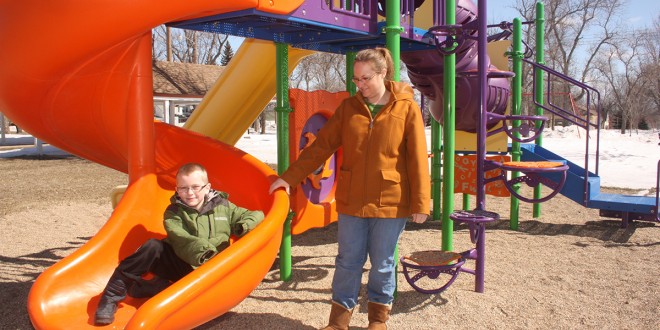 Beth Helkenn and her two children are regulars at the Swimming Pool Park in Clark.

“We try to get there about once a week or so. We usually stay about an hour,” she said. “Jack, my 7-year-old, likes the swings and likes to run up and slide down the slides. Lucas, my 6-month-old, just likes being outside and watching his brother play.”

Helkenn said she thinks playgrounds are important to a town’s quality of life. “It shows it’s a kid-friendly community,” she said.

Many others in rural Dakota communities have also come to the conclusion that playgrounds are key components of good living for their families. Clark, Faulkton and Frederick recently upgraded school or public playgrounds; Britton and Ipswich are in the process of fundraising for new playgrounds, and Groton is waiting for the go-ahead on purchasing new play equipment. 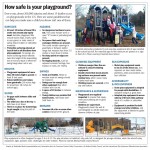 How safe is your playground?

Use this infographic to identify potential hazards at the playground in your community. (PNG version)

Decades ago, when much of the city playground equipment in Dakota communities was last updated, it might have been pieced together from donated well pipe and volunteer labor. It’s not so simple anymore, as new national guidelines for making play equipment safer and more inclusive also makes the whole process more complicated and more expensive.

Still, as Jack Helkenn might well tell you, the benefits for communities make it worth the hassle.

Britton-Hecla Elementary Principal Kyla Richter has been encouraged by her students to get their school playground project moving.

“I can’t tell you how many times I’ve had students walk into my office and say something to the effect of, ‘Mrs. Richter, when are we going to get some of that cool new stuff for our playground?’” Richter said. “The questions I’ve received are motivation enough to see this project through.”

Here’s an overview of how communities can benefit from playgrounds, issues playground planners need to consider, and how local towns are finding the money for them.

Working on improving a playground?

This article has all sorts of information on the who, why and how of improving community facilities.

The more that play is studied, the more the evidence shows that play is, as the Academy of Pediatrics said in a 2007 report, “essential to development.”

The report’s list of benefits for children is long. Play helps children stay physically fit (especially important when increasing numbers of children are overweight), but play also helps children with cognitive, creative and social development. And, according to a report by Playful City USA, if children don’t play, society won’t see those benefits.

“Without more time for play, we will continue to see a decrease in creativity and imagination, problem-solving skills, the ability to assess risk, and resiliency,” according to the report. “All of these help children not only to learn more effectively in school but also for successful adulthood.”

Playgrounds can also yield benefits to neighborhoods and communities.

“Although they are often considered frills when budgets are tight, (parks and other community facilities) can be just as important as fire and police services to the quality of a community,” according to Phil Rabinowitz, writing for the nonprofit resource site Community Tool Box (www.ctb.ku.edu).

One study in California found that property values are frequently as much as 20 percent higher for properties near parks, according to KaBOOM!, a nonprofit that works to bring playgrounds to needy communities.

“Any open space in a community needs to attractive to the eye, functional for its purpose, and a place for people to congregate and enjoy some family time,” according to Joel Price, superintendent of Faulkton Area Schools. “A playground, if done correctly, should meet all of those things and more.”

Lisa Raethz, city finance officer in Faulkton, said community facilities are especially important to small communities that can’t offer as many recreational activities. “I believe the quality of locations such as the city park, school playground and the swimming pool are very important attractions in our community that help obtain new residents with children,” she said.

Once communities come to the conclusion that they could benefit from new playground equipment, they will also soon realize that the process has become significantly more complicated than it was a few decades ago. National guidelines aimed at reducing playground injuries (there are about 200,000 each year, and about 13 deaths, according to the Consumer Product Safety Commission) give a long list of considerations for playground planners.

There are no national mandatory standards, but some states require that playground equipment complies with standards set out by the ASTM (formerly known as the American Society for Testing and Materials), or that the overall playground meets standards outlined by the CSPC.

“Most often we look at liability issues if a child were to fall, strike their head, etc.,” Price said of the administration’s considerations at the Faulkton school playground. “The issue is risk avoidance rather than just placing a piece of equipment into the soil and letting the kids have fun.”

Insurance companies can place additional limits on what is acceptable. That was the case at the  Faulkton city playground, were the city discovered after an insurance review that it was not in compliance with national playground safety guidelines. “Several noncompliant items were eliminated,” Raethz said. “Insurance and federal guidelines also require a soft landing surface for the underlayment beneath all the playground equipment. The city replaced all underlayment in 2011 also.”

That soft landing surface is the most emphasized aspect of playground safety in many publications on the subject. This highlights an important aspect of how playgrounds function: Children often fall. Most playground injuries (79 percent) are caused by falls, according to the CSPC.

But, despite that, we should actually want them to fall.

A child who experiences a fall in childhood that’s serious enough to have some consequence like a broken bone may actually be less likely to be afraid of heights in adulthood, according to a New York Times story (“Can Playgrounds Be Too Safe?,” July 18, 2011). Studies suggest that certain types of “risky play” are important to development; falling and recovering can give children confidence and coping tools.

The challenge for playground planners is ensuring that children can recover from those falls, and they don’t instead cause serious head injuries or death.

The CPSC recommendations on surfaces may be more than some communities realize: Loose-fill surfaces such as wood mulch or pea gravel should be installed at 12 inches deep, the guidelines state, and 6 feet in every direction from the play equipment.

That may prove to be the most expensive part of a project. Planners of the elementary playground upgrade in Britton looked at redoing the surface around the play equipment but opted against it at this point, as it would have quadrupled the cost of the project.

Playgrounds also need regular maintenance to maintain safe conditions, which also should be factored into the cost of a project, according to the CPSC.

Public playgrounds are now required to follow new rules to make them accessible for people with disabilities. Following the safety recommendations is voluntary (unless insurance requires it), but complying with the Americans with Disabilities Act’s new rules, which went into effect in March 2012, is mandatory.

“Most communities do not need to address their playground immediately,” according to Paul Kosel, safety coordinator for the city of Groton. “But once there is a change, whether it’s taking something out or adding a new piece, then the ball begins to roll and a plan must be put together in how the playground will become compliant with the regulations. … The overall plan of the regulations is that in the future, there will be no such thing as an ADA accessible playground because all playgrounds will be accessible.”

In that way, future playgrounds will help put kids with disabilities on the same level—sometimes literally—with other playing children.

“Inclusive playgrounds allow people of all abilities to play side-by-side with siblings, friends and caregivers,” according to a June/July 2011 article in the newsletter for the North Dakota Disability Health project. “The key to good playground design is to have a variety of activities that attract children of all ages, heights and abilities as well as differing interests.”

The biggest part of this for most playgrounds is ensuring there is a 60-inch-wide pathway to the accessible play equipment. This is likely of a rubberized material, so it also meets the shock-absorbing safety guidelines.

How much of the play equipment needs to be accessible for people with disabilities depends on how much equipment there is total. The IPEMA (International Play Equipment Manufacturers Association) provides guidance on this at http://www.ipema.org/news_articles.cfm.

Many play structures can be made compliant with the addition of an accessible swing, which is generally much appreciated: “Parents often express that the most important piece of playground equipment is the swing, allowing children to feel the air movement, the sunshine on their faces, and the smells in the air,” according the NDDH newsletter article. But other accessible components could be added for variety and possible future needs. 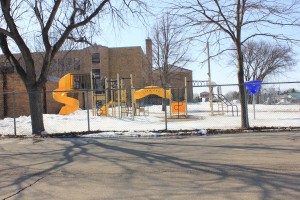 One other aspect of inclusiveness is making sure that the play equipment serves children of all ages. Most manufacturers label equipment as suitable for ages 2-5 or 5-12, as the two groups have considerably different needs. An inclusive play structure would have something for both groups, and would label them to guide supervising adults.

Local groups have followed all sorts of strategies to fund their playground efforts. (This may be how playgrounds help adults develop their creativity.) 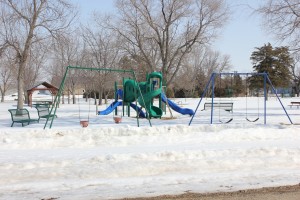 Play equipment is often designed for ages 2-5 or 5-12. The play structure in Faulkton’s city park is designed for younger children. Photo by Garrick Moritz/Faulk County Record

Two years ago, Clark passed a city resolution to set aside $5,000 for capital projects. “Funds are specially used for park improvements or park equipment to enhance our community,” said Jackie Luttrell, Clark’s finance officer. “We also get donations from area clubs such as the Lions/Lioness club, for example, which helped purchase the pearock.” 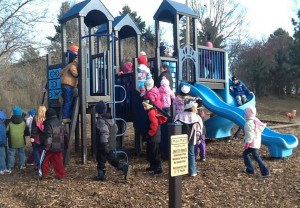 Frederick elementary students try out new play equipment after it was installed at the school last fall. The intended ages for the structure are posted on a sign in front of it. Photo courtesy Frederick Area School

Area Frederick parents raised funds for new play equipment for the school by asking community members and groups, as well as far-flung alumni, for donations. Many donors were at the $100 level, according to the Frederick school website.

Ipswich is working to add playground equipment to the Ipswich Library Park, which currently doesn’t have any. The Ipswich Economic Development Corporation is helping to organize fundraisers, including a softball tournament Memorial Day weekend, and a community fun run in early June.

The school will finance part of the new playground in Britton, and many fundraising activities are planned to raise the rest. One of them is a Britton-Hecla Elementary Cookbook. Residents are also asked to consider memorials or gifts in honor of loved ones.

“We have created a task force that will be meeting this week to get ideas from parents and community members,” according to Richter, the Britton principal. “We have big plans. Now it’s just a matter of finding the time and manpower to follow through with them.”

The kids, eager for better places to play, will provide the motivation.

Is your community upgrading its play spaces? Do you think playgrounds are really important to quality of life? Tell us about your experience! Go to www.dakotafirecafe.com/beyond-the-story-playgrounds.