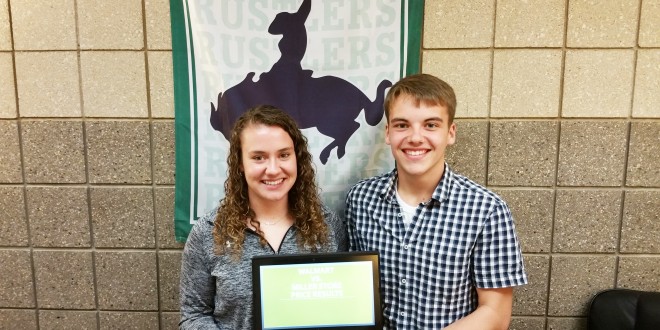 Often, the key to breaking down age-old problems is bringing in fresh ideas. What better place to find new ideas than in the minds of young people? Youth see the future without barriers, and sometimes their ideas break through geographic boundaries, too.

“We’d been in decline for 90 years,” said Randy Parry of Howard, S.D., where he taught a business class at the local high school, coached the varsity basketball team and ran an ice cream parlor on the side. He was quoted in the 2010 book Switch: How to Change Things When Change is Hard by Dan Heath and Chip Heath.

“In 1995, a group of high school students in Howard, S.D., started plotting a revival. They wanted to do something, anything that might revive their dying community,” the book said.

So the class, with Parry’s help, conducted a survey of 1,000 registered voters in Miner County, examining their spending habits. They were alarmed to find that half of them were traveling an hour—to Sioux Falls, S.D.—for most of their shopping.

“If Miner County was going to be reborn, its economy would need a boost,” the Heaths wrote. “Most of the things that would boost an economy—investment, entrepreneurship, immigration—were out of the students’ control. But they had uncovered one thing that was very much in their control: spending money locally. They had found their first rallying cry: Let’s keep Miner dollars in Miner County.”

With a little research, the students concluded that if each adult spent just 10 percent more of their disposable income locally, the Howard economy increase by $7 million.

“The audience was impressed, and the presentation worked better than anyone expected,” the authors wrote. “The students had scripted the first critical move for Miner County, and the locals responded immediately, consciously spending more of their money in the county. A year later, South Dakota’s Department of Revenue released an astonishing number: The amount of money spent in Miner County had increased by $15.6 million, more than twice the increase the kids had expected.”

Twenty years later, the project in Howard is inspiring leaders in Miller, S.D., a community 100 miles to the west.

On the heels of a $700,000 community center project, which includes a 400-seat event center, 75-person meeting room and senior center, Miller residents are wondering what else is possible for their rural community, and local economic developers are ready to help them realize the potential.

“We were amazed at what (Howard’s) youth had been able to accomplish for their town by encouraging local citizens to shop at home just 10 percent more,” said Tammy Caffee, executive director of On Hand Development Corporation. “We decided Miller could definitely do that, too.”

On Hand Development has been able to spark excitement among community leaders young and old in Miller, which is the beginning of what leaders hope will become a successful shop-local campaign there. Conversations at two Business Bash events have centered on a winter shop-local campaign—and what new developments could happen in town as a result of the collection of increased sales tax dollars.

Conversations at the Business Bash events are helping local businesses more effectively respond to residents who voice concerns about the lack of retail selection by pointing out where coveted items can be purchased in Miller, or offering to respond to customer desires by expanding inventory.

“We are finding there is a collective pride in having local businesses, but the attitude still remains that shopping out of town is bigger, better and bolder in some way,” said John Beranek, an executive coach in Sioux Falls. Beranek grew up in Miller and was invited to help Miller progress by Dakota Resources, an organization that first helped Miller make progress on its housing crunch through the Home Address Program.

Caffee, a retired principal, believes Miller’s young people have the energy and enthusiasm to change the tide.

“Social change usually comes about because of our youth,” she said. “Remember the Weekly Readers you received as a young student in school? That publication really helped bring about social change with civil rights and also with women’s rights. The same is true here.”

With the youth as the leaders and the success in Howard as a guide, Caffee said she expects the project will help Miller fund infrastructure updates, tackle new projects and “keep our town alive.”

As a first step to the shop-local campaign, students and local leaders will survey Miller consumers about their retail desires and why they travel out of town to shop, creating local and regional price comparisons and suggesting ways in which Miller merchants can help people shop locally.

“Children can be our conscience” and help adults stay true to their promises to promote local businesses by shopping locally, according to Caffee.

Through Miller’s shop-local campaign, student leaders have the opportunity to teach the community’s adults about all the town currently has to offer, which then allows those adults to reimagine the future of Miller, and how those students—like Beranek—can help shape the community, both now and in the future.

“We hope our citizens learn about what stores have to offer here in Miller and also learn how their purchases generate sales tax revenue when they do shop local,” Caffee said. “We want them to be able to envision what would be possible for Miller if more local shopping took place.”

Editor’s note: Some of the latest developments in Miner County have not been so positive. The Rural Learning Center, which shepherded much of the change in the county and beyond with its call to “reimagine rural,” has all but shut down. Maroney Commons, the grand building that was viewed by many as the next chapter of the county’s success story, closed after less than a year of operation. Many investors lost money. Worse, many in the community lost hope.

But, as the new work of the students of Miller High School shows, the story of what the young people of Miner County were able to accomplish still holds power. And it affected other stories beyond improvements in sales tax figures.

Consider this series of events: Soon after the Miner County students issued their “buy local” call, Mike Knutson started teaching in Howard. The students’ efforts changed him from a teacher who was not engaged in the community to one who was committed to making it better. He eventually moved from teaching to economic development work, where one of his roles was blogging about the opportunities available in rural communities. I started reading Mike’s great writing while I was living in Iowa, and it strengthened my resolve to look for a path home. His words also inspired and challenged me to consider how I could use my writing skills to make rural places better. Without the inspiration (OK, and more than a little envy) I felt then, I might not have been as determined in seeking a way to make a magazine about rural issues happen.

I’m pretty sure there’s a systems-thinking lesson in there somewhere. And maybe a message about having the courage to dare to do something as big as reimagining rural: Yes, you could fail. But you could also succeed in ways you couldn’t imagine.  —Heidi M-L