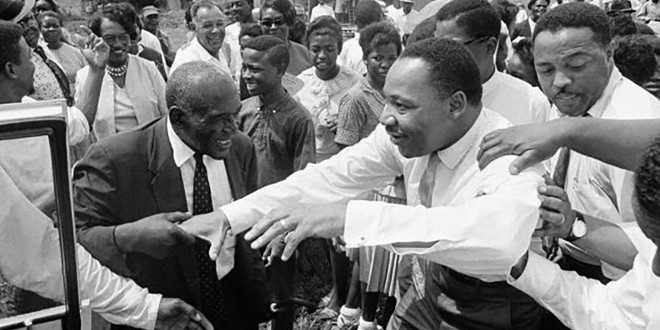 This photo, from a 1966 sit-in in Lisman, Ala., sparked a conversation that changed the way young and old leaders in western Alabama related to one another. Photo courtesy Pamelia Harris

In the 1960s, the Alabama Black Belt was a place where people struggled against the racial segregation that strained the relationships between blacks and whites. Today, the people of the region have a new mission: bridging the gap between young and old.

Though the stakes of this new integration may seem lower than they were half a century ago, they really aren’t, according to at least one Southern change maker.

“In some ways it is just as serious, because if the young people give up and leave the Black Belt, it will die,” said Pamelia Harris, a housing programs director who helped organize the Community Leadership Initiative in western Alabama.

“(New, younger leaders) are fighting for their region. They are fighting for counties that had nine schools and now have two. People move toward opportunity, and the opportunity is not there. There are not that many folks who get educated and move back and start businesses. In some ways, this is very serious, and they have a task before them that is a very important task. We want to help them grow the economy and stabilize the community.”

Finding a voice when legacy is strong

In recent years, efforts to move the Alabama Black Belt forward faced a major roadblock: The older people—some of them in their 80s—played roles in desegregating the nation and couldn’t see the value of the ideas of today’s teens and college students, which included bringing broadband access to the impoverished region.

An effort called the Community Leadership Initiative sought to bring together these two groups of leaders. Yet despite the shared desire to improve life in the Black Belt—a region ironically known simultaneously for its rich black soil and the impoverishment of black Americans—the two groups remained disconnected.

“When the younger, emerging leaders would offer ideas, the older leaders thought it was rather simplistic,” Harris said.

And the younger people, aware of the social movements of 50 years ago through movies and handed-down stories, were intimidated.

“They knew they wanted to make things better, but they do acknowledge that things are a lot better than they used to be,” Harris said.

When the older and younger leaders both showed up for meetings, they’d sit at separate tables. They might have looked at one another, but they weren’t really seeing one another.

Then, this February, that changed. It started with a photograph.

Harris presented the group with a photo of a familiar, yet distant, time and place. The image of a 1966 sit-in event in Lisman, Ala., showed a smiling crowd pressing close to Dr. Martin Luther King, Jr.—the man who became the icon of the civil rights movement, changing the dreams of millions with his stirring calls for change.

Harris challenged the leaders in front of her to identify the people in the photo. And then, an older woman in the leaders group recognized herself in the photographed crowd. Others could recognize other faces. The younger attendees were stunned to realize that the photo was filled with some of the same faces that were in the room with them.

Everyone in the group was asked to use whatever means necessary—personal connections, social media—to identify as many people as possible.

As a result, conversations started to happen between two generations—separated by at least one generation—about their common purpose: creating opportunities in the Black Belt region of western Alabama.

“We’ve had a whole generation of people who went to college and left, because of the lack of employment,” Harris said. “The young leaders we have now are interested in bringing opportunity back to the area, and they don’t necessarily know how to do that.”

The 80-somethings shared stories of hitching rides to be a part of the sit-ins and the consequences that arrests had on their college educations. The teens and 20-somethings shared their ideas for increasing employment and technological opportunities in the region.

“As the younger people started to really pay attention not only to the big sacrifices that you see on TV, but the whole logistics of change, then they began to really ask them questions,” she said.

The elders began to understand the younger generation’s plights and respect them as equals separated by a few decades, rather than youngsters with silly goals.

“These people were boots on the ground—or foot soldiers, as we call them here—(when) they were teenagers. They were young adults. They were college students. They weren’t 40 years old when they made these changes” that impacted the future of the nation, but they had to be reminded of that, Harris said.

When the Community Leadership Initiative set out to facilitate community action in Alabama, members knew both sets of leaders had something to bring to the table to bridge the gap between them.

The initiative began its work by facilitating workshops, roundtable discussions and community meetings. Since the photo discussion in February, subgroups have formed throughout the region, and Harris’ staff has little to do with the work taking place. Projects include working together to bring fresh produce to gas stations in areas where grocery stores are sparse, and building understanding between loggers and their environmentally conscience offspring.

“We fostered the beginning, and now we see more ideas continuing, more folks getting together and meeting, more youth being involved in the commissioners’ meetings, going to the governmental meetings” to know why things are the way they are, she said. “It’s a cross-pollination of information and ideas that has given the relationships some value intergenerationally.”

By focusing on their similarities, the two groups now work together to tackle problems in an area with a history of poverty and oppression.

“Once you identify opportunities in your community—areas that should grow or should change or things that even should not be—you also identify the people who would benefit from that change, and then you try to get those folks at the table, because when we’re all working together toward the benefit of our community, that’s when the change happens, and we realize we change faster.”

One big message can be taken away from the Black Belt and applied in any space, according to Harris: “Find the commonality,” she said. “It’s so easy to say that we don’t relate, but it’s a better outcome to find out where we do relate. Once you find out where that place is, that’s where you begin.”

Writer’s note: I met Pamelia Harris at the National Rural Assembly in Washington, D.C., in September and was inspired by the story of change from her community. I hope Dakotafire readers also find some inspiration in her words.