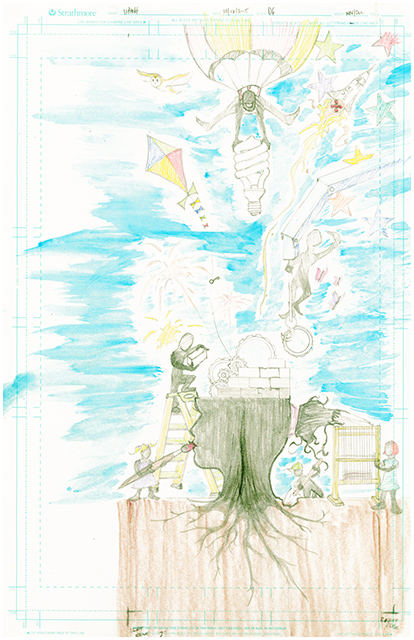 Every Friday, students in the government class at Lyons-Decatur High School in Nebraska put their textbooks aside and make their civics learning live in their communities.

That opportunity is part of a project called Community Studio, which was created by Jamie Horter, a community artist in Lyons, and Derek Lahm, then a teacher (now the principal) at the school.

The outline for students when choosing a project is straightforward: They need to produce a product or achieve a goal, and whatever they do has to benefit the Lyons or Decatur communities.

“Other than that, it should be something they are inspired by and something they want to do the whole year,” Horter said during a virtual presentation at the Prairie Idea Exchange in September. “The sky’s the limit.”

One student, defining community as a smaller family unit, chose to finish a long-postponed boat-building project with his grandfather. The project ended up being something positive for his grandfather to think about and work on while he was taking chemotherapy.

Two other students remembered fondly the ducks that once lived in the city park. After researching how to keep the ducks safe and cared for, they reintroduced ducks to the park so other children could form the same memories they had.

Other projects have included building a dock, conducting a blood drive, and replacing a driveway for a group home. All of these projects required the students to learn whatever skills were needed to get the project done: construction, pouring concrete, or making a request before the city council.

Community Studio is now part of the government class curriculum at Lyons-Decatur, so every student will complete a project in order to graduate.

The project has changed the way the community talks about students’ potential, Horter said. “They are realizing that students have an ability to create some really amazing things, and it’s changing that dialogue between adults and youth.”

But perhaps even more striking is the thinking that has changed for the students themselves.

“They are realizing that they have a great ability and capacity to be engaged citizens in their communities and to make a big difference in ways they may have never imagined before,” Horter said. “They stretched themselves when they took on these ideas. And I think at the end of the year they are all a little bit amazed at how much they have accomplished.”