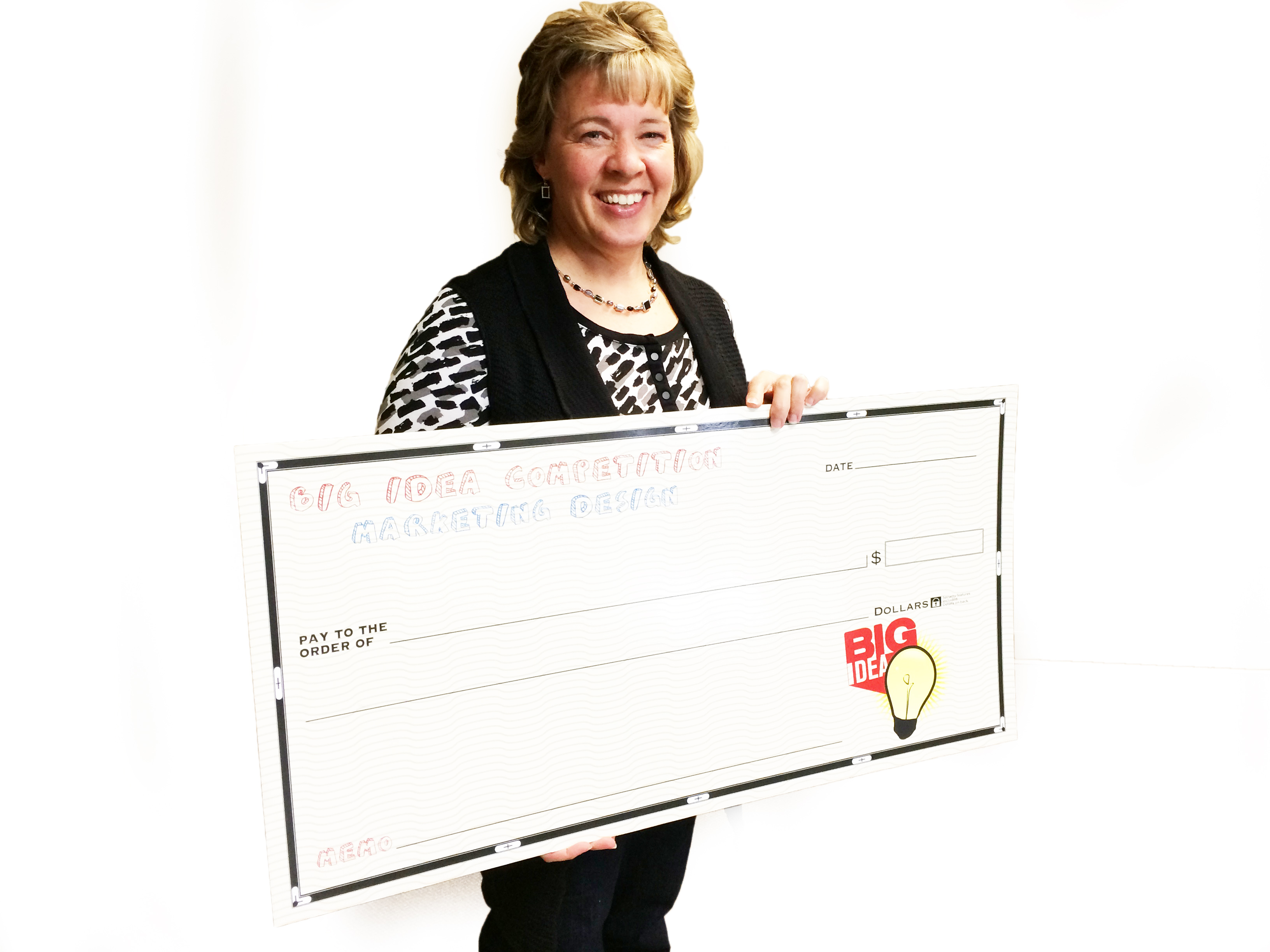 Kelly Weaver has checks ready to present to each of the winners in the Big Idea contest. Photo by Heidi Marttila-Losure

“Creating your own opportunity” in the place where you want to live requires a different mindset from following a set career ladder. Two competitions are working to plant the seeds of that alternative mindset into budding entrepreneurs in South Dakota.

Somewhere out in cyberspace there are right now perhaps 200-some entries for the Big Idea Competition waiting for about 150 judges—business owners, professionals, academics and economic developers—to log in and give them a critical read.

The deadline for the contest was Oct. 31, and by mid-November, the high school students’ entries will be winnowed down to eight finalists that will advance to the final competition on Dec. 3, according to Kelly Weaver, Big Idea coordinator and regional director for the Small Business Development Center in Aberdeen.

In mid-October, there were about 160 contestants in the system preparing entries, which was ahead of the pace from that time in 2014, when the final number of entries was 225, Weaver said. The number of entrants as well as the number of schools participating has increased steadily since the contest started in 2007.

The entry consists of a business idea, not a full-fledged business plan, but students need to give an overview of the concept, describe the product or service, research the market and competition, and consider management and operations. All in just 1,075 words. The eight finalists also will give a six-minute presentation at the Dec. 3 event.

Students can also enter a marketing design competition if they choose to, by designing logo and marketing pieces for their business ideas.

The top prize is $1,000, plus scholarships to Northern State University and Presentation College. A variety of other sponsors covers other costs.

The goal of the contest is exposure to entrepreneurship, Weaver said.

The contest intends to give support to the kids who don’t see themselves on that path, giving them a little training in seeing the needs in their communities and empowering them to see themselves as the kind of people who could meet those needs.

Organizers survey contest participants after the event and ask them if their interest in owning a business has increased since the competition. About two-thirds say it has, Weaver said. Organizers hope this can yield some long-term benefit for the state’s economy.

“We … know, working in economic development, that we need to grow from within,” Weaver said, adding that many of the businesses in the area that are now adding jobs are owned by people from here who grew their businesses in their own communities.

The Governor’s Giant Vision Competition takes the work of “opportunity creation” to the next level: a more challenging contest, but also bigger prizes.

The main division of the Governor’s Giant Vision Competition is open to any South Dakota resident who has a business presence or plans for such a business, according to Mary Ann Boyd, vice president of program services for the South Dakota Chamber of Commerce and Industry, which co-sponsors the contest.

The student competition is open to any full-time student of a South Dakota college, university or technical school.

The goal of the competition is to “show residents of South Dakota that you can start and operate a successful business in South Dakota,” Boyd said.

Both of the divisions start with writing a business plan that includes financial projections. Those entries are distributed to judges who narrow them down to the top applicants based on which plans have the most potential for success.

Those finalists will set up a trade show display and prepare a “pitch” to be presented to a panel of judges (which includes business owners, educators and venture capitalists) at a daylong event in April.

With the current workforce shortage, much of the state conversation lately has focused on filling jobs, and less on creating them. There’s a natural tension between serving both of those goals, but that’s as it should be, according to David Owen, president of the South Dakota Chamber of Commerce and Industry.

“The economy is not monolithic,” Owen said. “That’s way too simple. Giant Vision exists to appeal to those folks that have that sense that they can create or run a business and have that drive in them.”

Owen added that we sometimes assume that entrepreneurship has to be technological or original to be really interesting.

“Part of fostering an entrepreneurial spirit is giving people the strength to know they can answer the challenge if they buy a McDonald’s franchise,” or, as one contest winner proposed, opening a day care center, Owen added. “That’s being an entrepreneur as well. I think we run the risk of narrowing that definition (of entrepreneur) to the disservice of what it really is.”

Want to see how your idea measures up?

Big Idea Competition: The deadline for the 2015 contest was Oct. 31. (Students: It’s never too early to start preparing for next year!) Finalists will be announced in mid-November, and winners will be announced following the Big Idea event on Dec. 3. For more information, go to www.bigideasd.com.