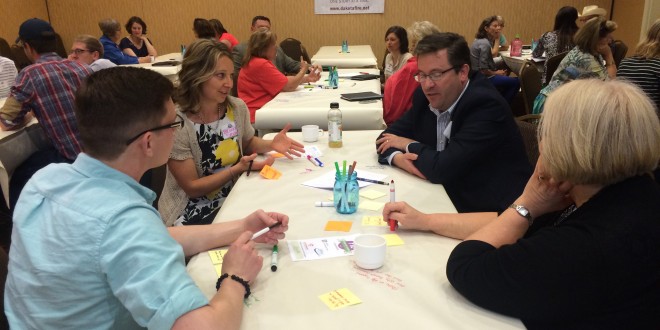 “What new ways of doing things would help agriculture and communities to make each other better?”

If the old adage that “as goes the farmer, so goes the farm town” holds true, making ag work is important to everyone in our rural culture. Bridging town folk and country folk can help our communities, counties and states flourish. But the effort has to be intentional.

Following are nine examples of how ag and economic development professionals in the PIE session think we all can work together to bridge the gap and move forward. 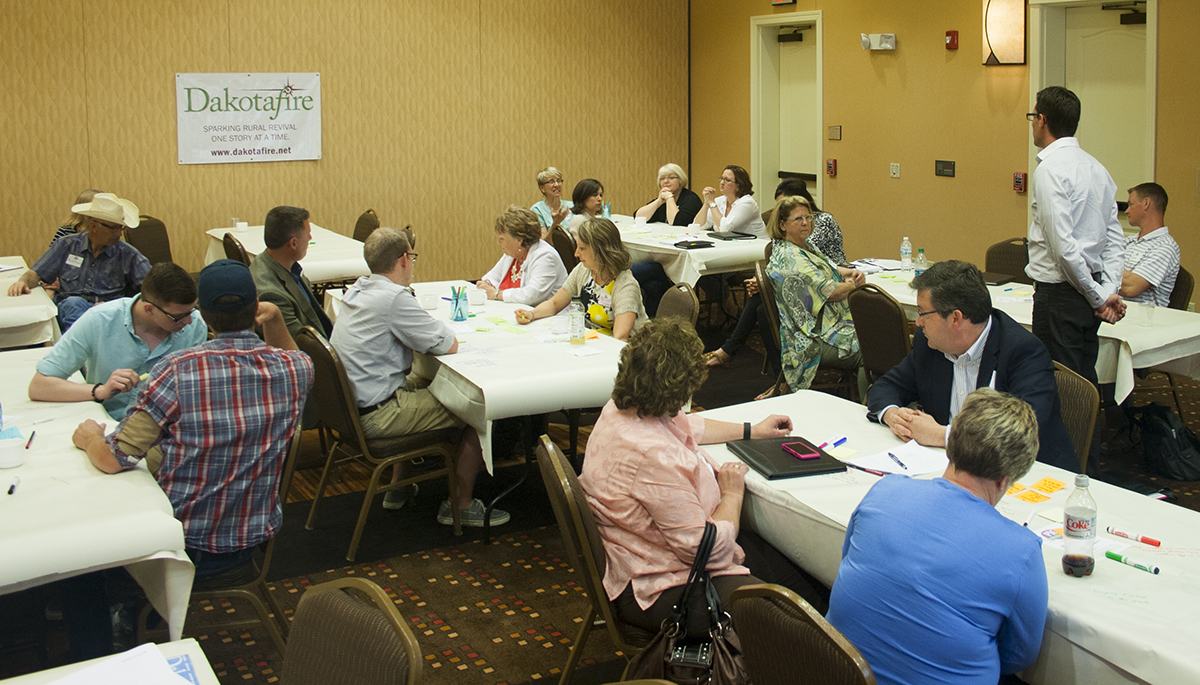 Since the success of rural areas depends on both those who live on paved streets and those who reside on gravel roads, we may need to re-examine and define what it means to be a part of a “community.”

“A community can be as much as you want it to be, but it can also be as constrained as you want it to be,” said South Dakota Secretary of Agriculture Lucas Lentsch. “The farmers and ranchers and producers across our countryside are absolutely a part the destiny of their hometown area (and) their local communities, in a broader sense. … (We need) the opportunity to communicate together and bring that sense of community together, and recognize that there aren’t boundaries to it.”

And the definition of “communication” is evolving as well.

“My dad’s way is not my way, and the next generation’s way is definitely different,” Lentsch said, referencing his mostly-text communication with his daughter. “We think about the values of going to a meeting and going to town and talking, but the next generation ‘has an app for that,’ so what are we doing to make sure that our communities, in a global sense, are more relevant for the future? … We have to embrace the tools and technology of the day.

2. When both town and agriculture are involved, good things happen.

“Two heads” are better than one, as they say, so pooling the ideas and resources of both the country and town residents of an area can increase the group’s collective powers and abilities.

“The … (geographical) ‘border’ that goes around a town … (and) the ZIP code circle, and how those two (overlap) … needs to become a permeable line, and the farmers act in the community, are involved (and) offer their input in community planning and organizations and events, and the people in town somehow find a reason to put themselves out in the rural area and get a sense of what’s happening there as well,” said Kulm, N.D., farm wife and Dakotafire contributor Sarah Gackle.

Besides, Midwesterners are known for working together.

“When you provide opportunities for the ag leaders and community leaders to hold meetings together, you get that true ‘community’ feel,” Centerville (S.D.) Development Corp. Director Jared Hybertson said. 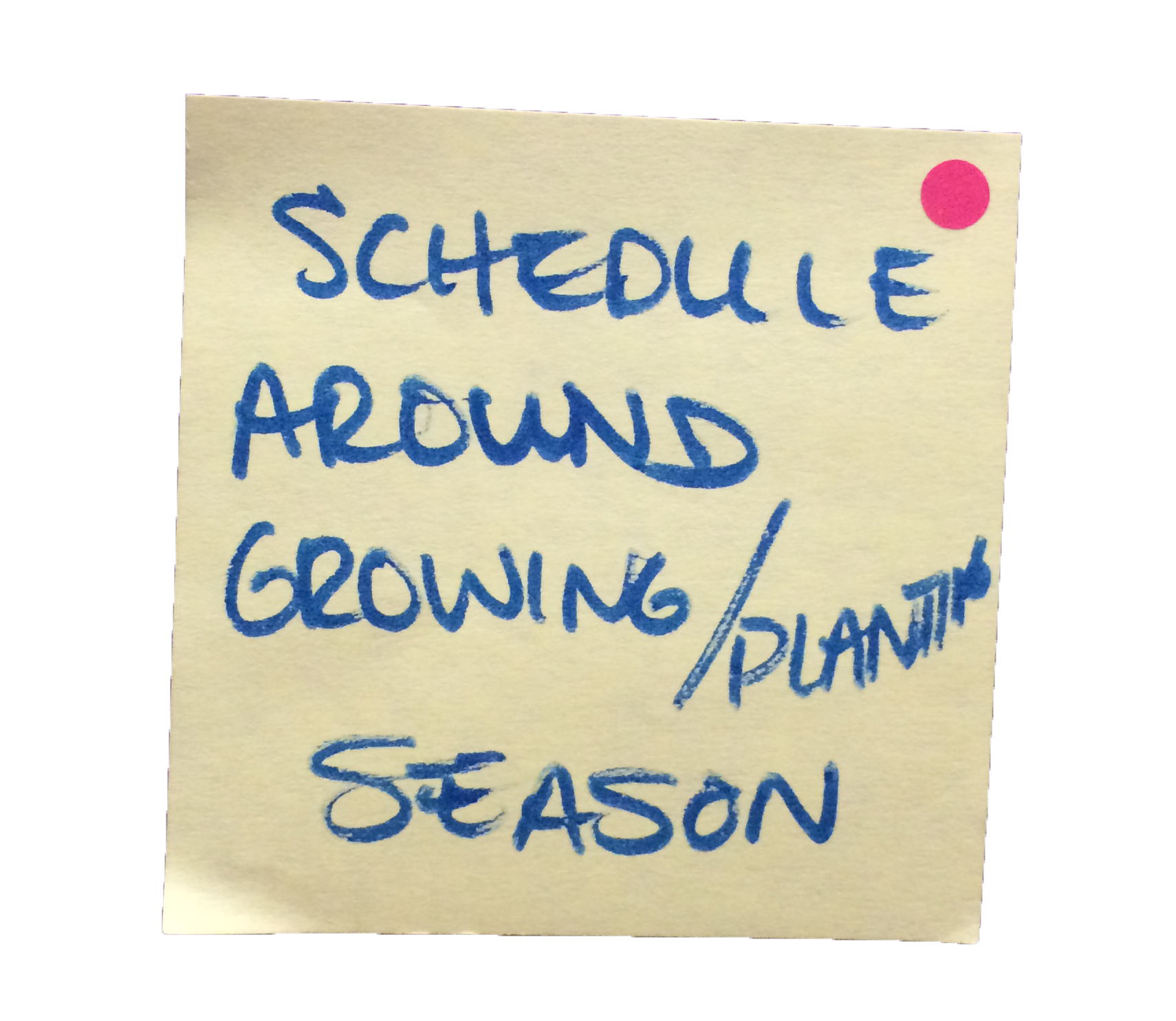 If community leaders aren’t expecting local bankers to abandon their duties to attend important meetings, they probably shouldn’t expect farmers to, either. Being mindful of farmers’ schedules can make it easier for them to have a voice in the goings-on of our communities—especially during the planting and harvesting seasons, when daylight and favorable weather are hot commodities.

“(Organizations need to) change some of their meeting schedules during the farm season … make it later at night, so the farmers don’t lose as much (daylight), and they can make it to those meetings more easily,” Gackle said.

Just an hour or two can make a whole world of difference in whether a farmer can attend a meeting, and the gesture may determine whether he or she will.

4. Agritourism can benefit rural economies as well as understanding of agriculture.

With the children of today’s Dakotas mostly not raised on operational farms, an increasing number of people in our states have never stepped foot on anything more than an acreage.

“Most kids who are graduating from high school today are more than two generations removed from the family farm, and they don’t quite have a connection to where the food comes from,” said Todd Kays, executive director of First District Association of Local Governments in Watertown, S.D.

In that community, second- and third-graders are taken to tour farming operations large and small, to see, hear, touch and smell farm life. Similar agritourism is happening elsewhere in the state, but those sites are not well-known regionwide.

“It might promote more of those if the state did more with the (Department of Tourism) and agriculture working together to develop those,” said Rita Anderson, director of economic development in DeSmet, S.D. “A lot of other states do a lot of that, and I think South Dakota has a big opportunity here that we really should be thinking about developing.” 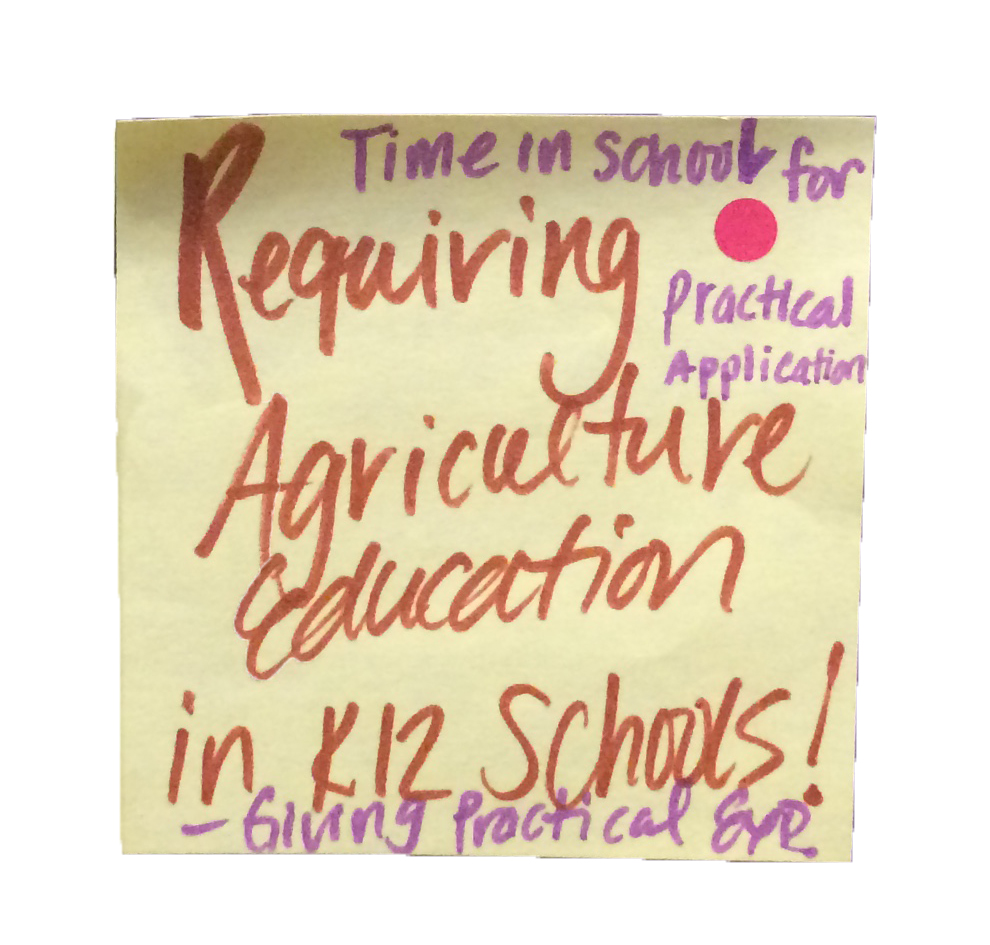 “Many of us in economic development have really seen over the years a lot of big contributions from farmers,” said Margot Gillette, executive director of Beadle and Spink Enterprise Community, based out of Doland, S.D. “They gather around the school systems really, really well.”

One way schools can honor those gifts it by offering participation in Future Farmers of America, 4-H and other ag-based organizations, as well as using farm examples for math, science and other subjects, in addition to hands-on experiences. But, in order to do this, educators must first be educated on ag themselves.

Community members should buy what they can from their local farmers, and vice versa.

“The values of the communities need to be reinstilled,” Lentsch said. “Valuing your community or your local cooperative … and knowing that there’s value in shopping local and being part of your friends’ and your neighbors’ (businesses), to help leverage your collective voice economically and on a local level is really important.”

Commitment to the livelihood of a community has to be a conscious choice.

7. Rural people need to realize that the success of their neighbors affects their own livelihoods as well.

“‘Profit’ is not a dirty word,” Lentsch said. “We want each other to succeed. … When a Main Street business is doing well or a business … is doing well out on a country road someplace … all of that is how we do better together.”

Even though 80-mph interstates and the information superhighway make the “deals” at large chain stores faster and easier to obtain, sacrificing a few dollars here and there keeps local businesses alive and adds to the local tax base.

“You need to overcome your selfishness and say, ‘This is still better for me in the long run,’” Onaka rancher Rick Rausch said.

In the end, rural consumers can “vote with their dollars and their forks,” spending money and buying food in a way that supports the things they value.

As author and educator Anna Lappe, an expert on food systems, put it, “Every time you spend money, you’re casting a vote for the kind of world you want.” Those who have chosen to live rural typically do not desire a fast-paced world filled with “cookie cutter” foods, where everyone is a number and no one knows your story enough to care enough to say hello.

“Everybody kind of longs for that … community feel, supporting local businesses,” Hybertson said.

8. Contact out-of-state or even out-of-county landowners and ask them to support their local community foundations.

Each spring and fall, millions of dollars leave our rural areas in the form of rent checks to landowner heirs. Most of the time, once that money leaves, it never returns. Appealing to these landowners, some of whom were raised on the land, and asking for their help grows our local economies through support of local endeavors, such as community foundations, schools and major fundraising projects.

“Nonresident landowners can play an important role in helping build sustainable communities in South Dakota,” said Stephanie Judson, president of the South Dakota Community Foundation. “While they may no longer live in or never lived in South Dakota, most feel a strong connection to the state and may even call South Dakota ‘home.’… I believe that if we provide the means and the opportunity, many nonresident landowners will want to be a part of supporting the community that is a part of their family’s heritage. …It is imperative that we promote community savings accounts, school foundations, library foundations and other community resources as vehicles for helping our communities prosper.”

9. Encourage value-added or stacked industries so that farmers can make a better living or add a returning child without needing more land (to combat depopulation trends).

“It’s not just on the farm,” Lentsch said. “It’s also those value-added development projects that happen within the community.”

Enhancing farmers’ raw goods—whether on the farm or at breweries, bread companies, ethanol plants or farmers markets—is good for communities’ livelihoods and its survival more generally.

“As a state, we’ve seen what a lost generation looks like, by not having economic opportunity for them when the farm crisis of the late ’70s and ’80s hit. It took people out of the state,” Lentsch said.

Strategic value-added agriculture can stand against that.

“It might be a feeding operation, it might be an ethanol plant, it might be a renewable-fuels expansion that we don’t know about yet,” Lensch said. “It’s (about) having that opportunity add value to what we raise, but also creating those jobs locally that we otherwise might miss out on. It all comes back to an economy that drives opportunity.”

What new ways of doing things would help Ag and Communities to make each other better? Share your thoughts at www.pie4.us.