Print This Post
Topics include the attractiveness of rural places, the expansion of the improperly named Dry Lake No. 2, and the appeal of rural churches in the area.

Dear Dakotafire: First, I want to congratulate you on the launch of this new publication. It is a work that has been needed for quite some time. Thank you for the time and effort.

I am a “transplant.” My wife and I moved from the East Coast to South Dakota in 2004. We were attracted by the high quality of life and the low cost of living. I have never regretted the move.

As an outsider I found many things here that have been lost back east. This area is rich with hard-working, dedicated and friendly people standing ready to lend a hand and welcome new people into their community.

What you have in Dakotafire is a powerful tool to remind those who have moved away what they left behind.

I would like to bring up another subject. It is my considered opinion that the outmigration that plagued the Upper Midwest over the decades has begun to ebb and the population trend is reversing.

More and more people are getting disgusted with over-taxation, over-crowding and traffic in the larger communities. New York, New Jersey and California all lost population in the last census. North Dakota, South Dakota and other Plains states have gained residents. That trend will continue. People are moving to Bismarck, Fargo, and Sioux Falls, but they are also starting to move to the smaller towns as well.

Folks who work from home are starting to realize that “home” can be anywhere. So why not make your home in a town with a local school of fewer than 200 students? The kids moving into these towns are richer for the experience, and the parents have the peace of mind that comes with a small community.

I truly believe there is a paradigm shift in the attitudes of the population. Rural (with the benefit of high-speed Internet and satellite television) is becoming more attractive then city dwelling.

This was not reflected in the 2010 census because truly high-speed Internet (let alone G-3/4 technology) only became available in the latter part of the decade. I think many people will be surprised with the data from 2020.

Thanks for what you are doing. It is indeed timely.

To the editor: Most of eastern South Dakota is familiar with the continuing expansion of Devil’s Lake in North Dakota and the devastating effect on the surrounding population. Many are aware of the similar situation near Bitter Lake in Day County, S.D. Far fewer residents of eastern South Dakota know about the recent rapid expansion and resulting devastation caused by the inappropriately named Dry Lake No. 2 in southern Clark County.

This lake was several small pockets of swampy cattail depressions until 1993 when the increase in rainfall began. It has grown to over 20,000 acres — comparable in surface size to Lake Thompson in Kingsbury County. To point out how ignored and unnoticed it is to the public, it is not even shown on the 2012 Rand McNally Road Atlas.

Local residents and those fishing Dry Lake can see several farmsteads that have been swallowed by the lake. It has engulfed thousands of acres of productive farmland and rendered many county and township roads impassable, isolating many acres of farmland and making travel extremely difficult. The income loss due to loss in farmland is well into the millions. Very significant is the tremendous infrastructure damage greatly affecting the economics of county towns and communities. The state of South Dakota spent over $4 million to raise Highway 25 out of Dry Lake water in 2011. Of course, Clark County loses a great deal of tax money since most of Dry Lake is privately owned and no tax can be collected on flooded land.

Dry Lake No. 2 is between the James River and Sioux River watershed. If Dry Lake would go up about three more feet from its 2011 elevation, it would began flowing into the Antelope Basin south of Clark. Since this basin is 15 feet lower, it would flood several thousand acres at a great depth.

The big question is, can this continuing devastation be slowed, stopped, and reversed? Although too late for those who have had to abandon their farmsteads, the answer to the question is, yes. The solution would cost far less than those proposed to fix the Bitter Lake and Devil’s Lake problems and with great economic improvements.

An engineering study has been done on a plan to lower the lake level to allow the county roads to reappear and alleviate the destruction of other roads. The cost of this construction, to drain the top to Pearl Creek in Clark County where it would flow to the James River with a gated pipe, would be less than $2 million. By using the gate, the flow out would be when the James was not at a flood level. It would take several years by this method to lower the lake to a manageable level under average rainfall conditions, but the river is the only practical way to stabilize the level and recover the thousands of acres of flooded cropland and restore the infrastructure of Clark County at a minimal adverse impact to others.

Those of us impacted by the “Devil’s Lake of Clark County” need to have all the state residents understand and support this situation and the only practical solution.

To the editor: Love your Dakotafire. Hope it keeps coming.

I have an idea that I would like to run by you. In the Clark area there are several old Norwegian Lutheran churches, all of them being well over 100 years old. What do you think of featuring a church in each of the Dakotafire issues? There are also some in all the surrounding counties also. One of these days they will all be gone by way of fire or storms. I love to visit these days of the past … The people who get Dakotafire would love to see pictures and stories of their past.

From the editor: Thanks for the suggestion! While we probably don’t want to focus on churches to the exclusion of other interesting places in our region, this kind of feature is just what we’re looking for in the Postcard section at the back of the magazine. We’d welcome a photo of one of these churches, with about 500 words of a story that really brings that place to life. You can e-mail that to Heidi@dakotafire.net or mail a photo and writing to Dakotafire Media, Attn: Postcard Submission, P.O. Box 603, Frederick, SD 57441.

We’d love to have enough of these features so that we could, on a regular basis, send some along to the newspapers that publish other Dakotafire stories. These don’t need to be the work of professional writers or photographers, though good storytellers will have an advantage. All you history buffs, take your snapshots and get writing! 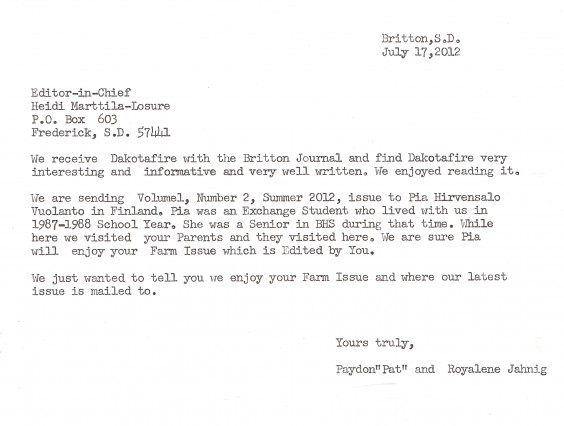 We so loved the old-timey class of this typewritten letter we wanted to share it.

We Want to Hear From You!

Please address any letters submitted for publication to Dakotafire Media, Letters to the Editor, PO Box 603, Frederick, SD 57441 or e-mail submissions to
heidi@dakotafire.net. With email, as with regular mail, please specify if the correspondence is intended as a letter to the editor. Dakotafire reserves the right to edit letters for length or clarity.