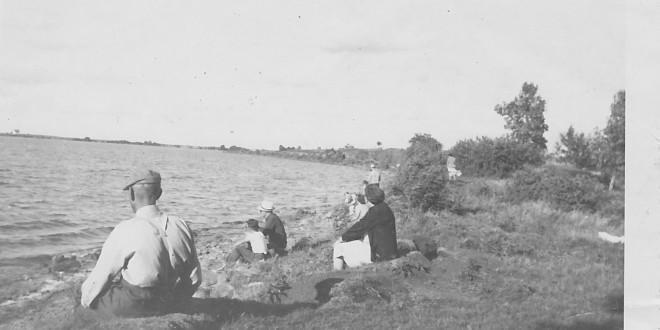 Fishing at Lake Tewaukon was a family affair for the Grammond family. Eugene Beron, left, lived in Cayuga and was married to Esther (Grammond) Beron. To Eugene’s right is Della (Grammond) Beglau, who along with her husband, Sam; daughter, Pat; and son, Curtis, enjoyed fishing at the lake whenever they visited from California. Photo courtesy Mary Ann Gadberry

POSTCARD: Lake Tewaukon was the place to go

Everyone in Sargent County knows where Lake Tewaukon is, and most of us have fished there at one time or another.

Lake Tewaukon was like a vacation destination for us when we were growing up, whether it was simply for a day of fishing, or for a Sunday picnic. My dad grew up in the area, so we always felt like we belonged there.

We would pack up the car with fishing gear, jackets, the minnow bucket, and a gunny sack to hold our catch of the day. The last thing my dad did to get ready was to attach the bamboo fishing poles to the passenger side of the car by tying twine around the poles and through the door handles. That meant we’d all have to get in through the driver’s side, because no one could open the doors on the passenger’s side. We used to argue over who had to sit next to the door that was tied shut, and it was one of the only times in my life I remember feeling claustrophobic.

Any anxiety disappeared when we arrived at the lake, and we all scrambled to get our fishing rods and to get the best spot for fishing.

My sister Rita and I were usually given the bamboo poles to use. Dad would make sure we were spaced out far enough so that when we lifted those long poles into the air, the hook wouldn’t swing over and catch the person next to us. But as hard as he tried to keep us safe from each other, there were usually one or more incidents when our hooks caught more than fish.

For the most part, I liked using a bamboo pole, but there was one thing I hated about it: When I raised it up from the water to check the hook or to bring in the line so that I could throw it out again, water ran down the pole and right into my armpit. The water was usually cold, and more than once I dropped my pole when the water tickled me as it ran down my arm.

I am not a patient person, and so I would check my hook regularly to make sure there was nothing on there. Yes, there was a bobber on the line, which let me know if I had a bite, but I never wanted to leave anything to chance. What if the fish was smart enough to nibble at the minnow and not make the bobber move?

My dad used to get so mad at me for constantly pulling my line out of the water. I couldn’t cast the line out again without putting someone in danger, so he would come over and cast it for me. I’m surprised he got any fishing done at all.

Fud, my brother, required less maintenance. He could do his own casting and put on his own bait, and he even liked taking the fish off the hook when he caught them. The only time he caused work for Dad was when he would chase me with a fish, which prompted me to drop my pole and run. My fishing pole would end up in the water or some weeds and my dad would have to retrieve it, add new bait, and cast it out one more time.

Rita was a natural-born fisherwoman. She was not afraid to bait her own hook, and she would crawl out onto the rocks if she felt the fishing would be better there, and she wasn’t afraid to take the fish off the hook when she did catch one.

My older brothers and sisters talk about having picnics at Tewaukon during fishing trips. Often cousins or aunts and uncles would meet them at the lake.

Because my dad’s family grew up around Lake Tewaukon, anytime they had a family get-together, the lake was the perfect place to have it. Many fishing stories and picnic memories have been passed along to the next generations.

There is one particular incident during a fishing trip to Lake Tewaukon that has stayed in my mind all these years: Once, when we were fishing, a car pulled up and the man yelled out his window that we needed to watch out because a rabid skunk was spotted heading our way. Dad told us all to get in the car, so we did. While we were in the car, a skunk came staggering through the grass. Of course, our faces were all plastered up against the car windows watching him as he wandered off.

I remember asking my dad why the skunk was staggering, and he told me that the skunk was sick. Then he told me that one way you can tell if a skunk has rabies is if they raise their tail to spray, but they can’t spray, and they leave no odor. In other words, if you can smell a skunk, it doesn’t have rabies. Now, I’m not sure if that is a scientific fact or an old wives’ tale, but that idea has stuck with me my whole life. Hopefully, I will never run into a situation where I need to question whether my dad was telling the truth.

This story is from the first of three books in Mary Ann Gadberry’s Home Again series published by Knuckledown Press and available on Amazon.com. Home Again for Spring and Summer, Home Again with Family in a Small Town, and Home Again for Autumn and Winter contain childhood memories of growing up during the 1950s-60s.