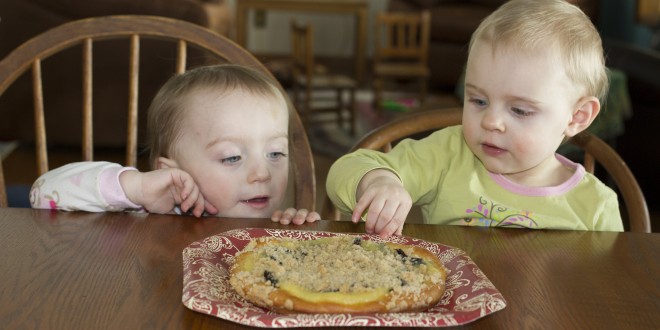 Elle Waldoch and Lucy Bartholomew are working on starting their own childhood memories of kuchen. The two girls are granddaughters of Sue Balcom of Mandan, N.D.

In South Dakota, kuchen was named the official state dessert in 2000, but residents on both sides of the Dakota-dividing line have been enjoying the delicacy since Germans first moved into the area just before the turn of the 20th century.

In German the word simply means “cake.” For many Dakotans, however, it means the custard-filled dessert that carries with it thoughts of caring and home. The “best” kuchen always comes from one’s own childhood kitchen.

“Nobody made kuchen like my mom,” said Kayla Zirpel-Proctor, a Parkston, S.D., native now living in St. Paul. “Hers was unique from all of the other ones that I ever tried. I’m not quite sure what it was—if it was the custard or what, but it was just different … Mom made kuchen at least twice a month, even in the heat of the summer, with no air conditioning. … Everyone knew my mom’s kuchen.”

Elaine Zirpel died in January 2013, leaving a hole at family gatherings that perhaps wasn’t at first realized. For both Easters since their mother’s death, Zirpel-Proctor and her brother, David Zirpel, of Sioux City, Iowa, have worked side by side, trying to create kuchens that would have met their mother’s approval.

The siblings spent hours in the kitchen, poured warm milk over sugar and yeast, mixed and raised the sticky, sweet dough, then rolled it flat, put it into pie tins, and topped it with fruit and a bubbly, rich, homemade custard.

While the confection wasn’t quite what the family was used to, Zirpel-Proctor said family members have thanked her for keeping a bit of their matriarch in each holiday celebration.

“It tasted similar, but it didn’t hold the ‘50 years of experience’ within it,” Zirpel-Proctor said.

But the experience was one of nostalgia.

“The way that recipe is written, I could just hear her saying it as I read it,” Zirpel-Proctor said. “I just felt like she was there, because she was always a big part of every single holiday. Now, the holidays are just very different, but because we had that kuchen there, she was still part of it.”

A kuchen queen (and princess)

Just a few miles southwest from the Zirpel homestead, kuchen is king in Delmont, S.D., and this year, for the first time ever, the queen and princess will be crowned. The 18th Annual Delmont Kuchen Festival is planned for Sept. 13-14, and is held in conjunction with the Twin Rivers Harvest Festival, which showcases farming practices of yesteryear.

Since its inception in 1996, when 35-40 kuchens were prepared, the Kuchen Festival has sold out every available pastry annually.

They are now well past a few dozen kuchens.

“We sell whatever we make. (In the past, we have made) anywhere from 1,000 to 1,300, and we don’t want to run out. Planning for 1,500 this year, we’ll probably reach our maximum. … People are very nostalgic about kuchen, because their grandmothers or their mothers made it when they were children,” Elizabeth “Sam” Grosz said, adding that people often stop to request the flavor their mother made most.

The first kuchen queen and princess pageant is scheduled for August, in conjunction with the community’s second-annual Neighborhood Watch Association’s National Night Out event.

About eight miles north of Delmont, in rural Hutchinson County, Carine (Oster) Sperlich, too, is known for her kuchen. Raised in Eureka, S.D., she has not attended a kuchen festival.

“We have always talked about going, but we have never gotten there,” she said. “I would like to see the different varieties of kuchen that they make, and see how it compares to the ones that I make.”

Sperlich said her passion for kuchen began as a young girl, watching her mother fill the family freezer with the delectable dessert.

“That was her go-to dessert. She would make kuchen, and when company would come—people would drop in, or on Sunday night, people would drop in and play cards and have lunch—and Mom would have kuchen in the freezer,” Sperlich said.

These days, Sperlich makes a large batch of the pastry at Christmas and Easter time, and fills her own freezer with the leftovers, but “it’s not a staple like it was when I grew up,” when her mother, Ella Oster, was “always making it.”

Although the Oster family recipe has been passed down for at least three generations, Sperlich said her own four daughters have yet to make it on their own.

Many of Sperlich’s childhood memories revolve around kuchen.

“Everybody makes kuchen in Eureka. … Everybody’s recipe kind of varies, as far as how much pudding they put on it, or how much fruit they put in, depending on what they grew up with,” she said.

Although Sperlich said “German food” varies based on whether a person is “high German” or “low German”—which denoted the level of precision put into one’s German dialect, but also seemed to reflect one’s wealth—kuchen was a staple for all of German descent.

“Everybody had flour and eggs, so you did a lot of things with the dough—dumplings and noodles,” she said. “We had a lot of homemade noodles, because if you had eggs and flour, you could make noodles, where maybe the high Germans had more meat. … (Kuchen-making) is a pretty labor-intensive process. You get up in the morning, and it’s probably four hours to get it all done. … You plan at least part of a day to get it all done.”

Everything is worth its price.

Want to try Elaine Zirpel’s kuchen recipe, or share your own? Have a kuchen memory to share? Go to forum.dakotafire.net and click on the kuchen topic!