The late S.D. Gov. Bill Janklow left a complicated legacy—even before the car crash that resulted in a fatality and forced him from public office, about eight years before his death in 2012. His effect on rural housing, however, was significant—and continues today. 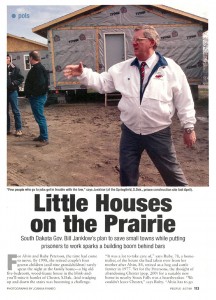 He “perceived that much economic development—which, in simple form, is called ‘jobs’—in small towns in South Dakota was dependent upon quality housing,” said Marshall Damgaard, a longtime Janklow aide who now is charged with compiling the Gov. Bill Janklow Archival Project at the University of South Dakota. “Quality housing was painfully short in smaller towns all around South Dakota. That affected the ability of the community to recruit new people—new workers. It affected the ability of the local school system to recruit new teachers.”

So, remembering the “transitional housing” he’d seen on the Rosebud Indian Reservation in the 1960s, Janklow suggested a plan that would indirectly increase small communities’ family-appropriate housing stock. The first two-bedroom, 624-square-foot home was constructed in 1996 and made available to elderly, disabled and income-qualified South Dakotans living in communities with populations under 5,000. At a rate of 25 cents per hour, labor to build the homes is provided by minimum-security prison inmates.

“In a lot of small towns, you have a lot of older … people, and (their homes are) … five or ten times bigger than what they need at that point in their lives,” Damgaard said. “If the person or people living in those larger, older, bigger homes can move into a small, energy-efficient home, then that frees up the large, older home for” young families.

“Owners of these small houses have customized them—they’ve personalized them, and they’ve turned a house into a home,” Damgaard said. That’s “one of the neatest aspects about the Governor’s House program.”

“It’s time to ignite a new sense of pride and enthusiasm to clean up our communities,” Janklow said as he unrolled the 2000 Spruce Up South Dakota/Tank Yank program.

County and city officials, township representatives, school administrators, fire department officials and other civic leaders worked together to support cleanups across the state.

“If you dispose of these things someplace else, you have to pay to get rid of it,” Lela Olson, longtime Marshall County Commission president and county coordinator for the Spruce Up South Dakota project, said in 2000. “This is an opportunity to get rid of this stuff when many people don’t otherwise have a way to do it.”

The state also provided workers and equipment free of charge to remove abandoned fuel tanks and tear down old, run-down buildings. Local governments needed only to provide labor to remove the debris from the torn down structures.

Final numbers compiled from the statewide cleanup were impressive.

Damgaard said both programs were indicative of the type of leader Janklow was.

2016-03-31
Britton Journal
Share !
Previous: Project aims to paint a better picture for those passing by Irene
Next: Centerville finds a housing solution in old homes
Scroll To Top