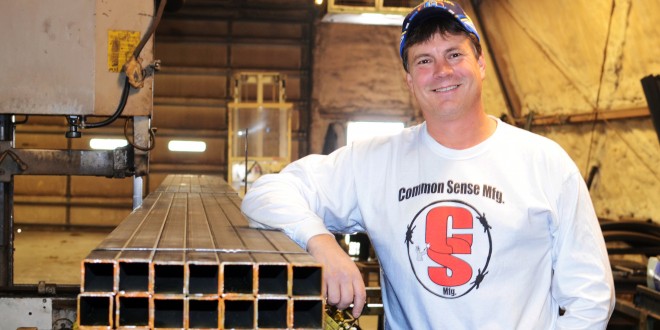 Kelly Melius was farming, living on the place where he grew up, when one of his landlords put 1,000 acres of land he was renting into the Conservation Reserve Program with little warning. He knew he had to create a part-time job for himself.

“And I’ve been behind ever since, is about the best way to describe it,” Melius said.

The business started with a bale feeder and has expanded with a new product about every year. Calf shelters, bottomless bunks and a solar water pump are among their offerings. Most products were built and tested on the Melius’ farm before they were sold. “I’m not just a welding-manufacturing guy who builds stuff,” Melius said. “I’m a farmer who builds stuff for myself and then says, ‘Hey, other people could use this, so let’s market it.’”

Outside factors are making it a good year for Common Sense Manufacturing, which makes Melius all the more eager to have their new facility on Highway 45 completed. The larger facility, which will allow for bigger and different projects, should be done by the end of the year.

The first years of the business weren’t easy: Melius was gone to farm shows for several months of the year, and since he was still farming then, during harvest time he built the bale feeders when most people would have been sleeping. But, he said, he realized early on that he wanted it to be a real business.

“The best way that I can describe my business … and what I’ve done,” Melius said,
“is I just put my head down and go.”

See the main story about Faulk County’s support of its entrepreneurs here.