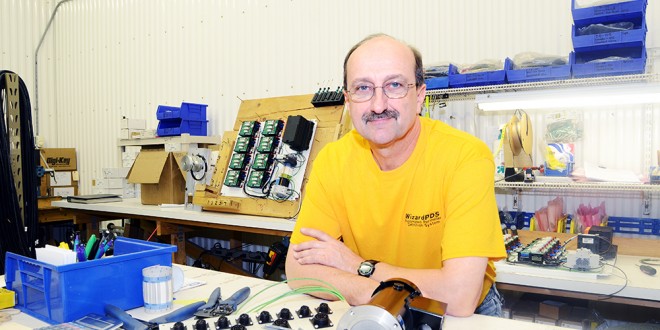 Clyde Frederickson now manages Truss Industry Production Systems, and the work at Truss Pro’s has gone to the next generation. Photo by Troy McQuillen

Entrepreneurial strategy 2: Get the details right.

Clyde Frederickson now manages Truss Industry Production Systems, and the work at Truss Pro’s has gone to the next generation. Photo by Troy McQuillen

It began when a couple of brothers were trying to figure out a way to make a little extra money.

Thirty-four years later, that original idea has mushroomed into four related businesses, jobs for 182 people, and an impact on the construction industry that is felt across North America.

Terry and Clyde Fredrickson were doing home remodeling and building garages in Aberdeen, skills they had learned from their father who at one time was an industrial arts teacher. Then they had the opportunity to build a house in Britton.

By the time they finished that home they had three more to build, and that’s how the brothers ended up in Britton. Then they decided they wanted to build a shop for making cabinets and working when the weather was bad.

“We figured we could build some wall panels and roof trusses for ourselves and maybe build enough so we could sell to some lumber yards,” Clyde said. “But we were busy and needed somebody else to work, and John Kraft was living in our parents’ apartment in Aberdeen. We knew John had the gift of gab and salesmanship and at the time he was working as an assistant manager at one of the lumber yards after graduating from Northern State University.”

The three got together and discussed starting a business to sell some roof trusses.

“Our plan was that we would make a full-time job for John selling trusses and hope to pay some of the expenses of having the shop,” Clyde recalled. “But a year after we started it was more than one person could handle.”

The trio had the benefit of timing: The truss business was in its infancy. They combined that with constant vigilance on how they could continue to get better, which resulted in dynamic growth.

“It grew faster than we could have imagined,” said Clyde of the truss business started in 1978. “We grew at the rate of 25 percent a year for quite a while.”

In a matter of months a building was constructed a mile east of Britton to build the trusses. Numerous expansions have taken place since.

The founders also split up responsibilities. John and Terry had the business degrees, so Terry handled the general management of the business, John focused on the financial side, and Clyde oversaw production and human resources.

“Most plants would try to outsource the engineering and design stuff, but we tried to do more and more of that ourselves,” Clyde noted. “We knew we would do a better job of optimizing design than somebody else that didn’t have an interest.”

The company also jumped on the technology bandwagon, beginning when IBM came out with the first desktop computer.

“We started looking at that first computer to help us manage and figure out our cash flow needs, and then we were one of the first ones in the country to start writing software to help us design trusses,” Clyde said. “We very much looked to technology to give us an advantage.”

The three men also did not shy away from a challenge.

“One of the keys to our growth was never being afraid to take on more,” Clyde stressed. “It’s very easy to get comfortable with what you’re doing rather than get more work and be overwhelmed. But you can’t sit still and have to be always looking for what’s next.”

That philosophy of not relying on others, along with a second generation of entrepreneurs, has played a strong role in the development of additional businesses as well as making Truss Pro’s a stronger company.

The lumber yard was a pre-existing business, but it has expanded and now includes Webster Lumber & Home Center and Minnesota Building Pros in Rogers, MN. Truss Pro’s also opened a truss and wall manufacturing plant in Rogers.

Children from all three of the founders are active in the businesses. Luke and Matt Kraft manage Truss Pro’s, and Josh Kraft manages the lumber yard operations. Drew Fredrickson, son of Terry, heads up Precision Wall Systems, and Melissa Dinger, daughter of Clyde, heads up accounting operations for the lumber yard and wall plant.

“When we started talking with the next generation and they expressed an interest in coming back, we told them there wasn’t room for everybody,” said Clyde. “But they knew the opportunity and were willing to make their own opportunity.

“That’s how Precision Wall Systems began. When we originally started building wall panels for our own houses, we knew the advantages, so Drew and Luke started up the new business.”

When Josh graduated from college he took over the Lumber Yard, and when Terry and Clyde retired from Truss Pro’s, Luke and Matt took over.

The group of businesses uses 120-130 rail cars of lumber every year, in addition to lumber that is trucked to the sites. Trusses and walls are shipped all over the Midwest, and the lumber yards supply materials to a wide radius of contractors. More than 100 truss companies in North America are presently using the patented automated jigging tables.

It all boils down to quite a footprint and legacy left by three men who were just trying to make a living building houses.

“There is no limit what you can do from rural America,” Clyde said. “Who would have thought!”