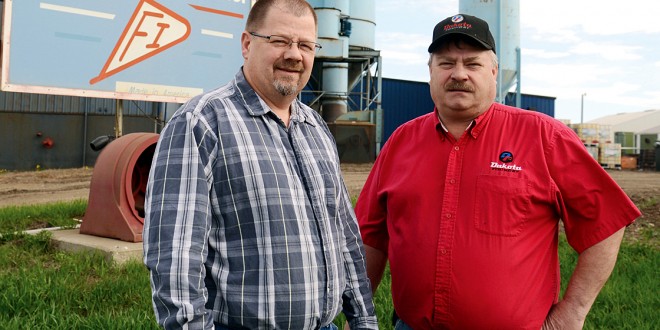 TRYING TO SAVE their jobs were Doug Valsvig and Josh Bartos of Dakota Foundry, Inc. The company’s investors are also it’s employees — something that causes people to look for inefficiencies while on the job, thus saving the company money. Bartos is also one of nine shareholders in The Galley in Webster. Photo by Amanda Fanger

At Dakota Foundry, Employees Are Also the Bosses

Trying to save their jobs were Doug Valsvig and Josh Bartos of Dakota Foundry, Inc. The company’s investors are also its employees — something that causes people to look for inefficiencies while on the job, thus saving the company money. Bartos is also one of nine shareholders in The Galley in Webster.
Photo by Amanda Fanger

In 2004, corporate owners of Mereen-Johnson Machine Company announced plans to sell the Foundry Division in Webster. Josh Bartos soon discovered the company was more likely to close than sell, meaning laying off all of the company employees.

Bartos, who is now the vice president of Dakota Foundry, and others didn’t want to let that happen. So they came up with a radical plan to save the company. From a kitchen table meeting, the idea of an employee-invested company was born.

“If this was going to continue, something had to change. Once you get skin in the game, everything changes. You know your job depends on efficiency,” said Doug Valsvig, who is executive vice president now.

The announcement to close the company came at a consultant’s recommendation.

“He thought it was a rotten egg,” Valsvig said. “We knew better.”

It was discovered that the company had too many fixed overhead expenses, something they felt could change.

“When we sifted through what a proper overhead could be, we knew this could make money,” Valsvig said.

After researching and putting together a plan, all the employees were gathered together and asked to invest in their company by borrowing against their 401k.

“This is like rolling the dice. You’re borrowing against your retirement,” Bartos said.

They were cautioned not to invest more than they could stand to lose. Of the 16 employees, 14 eventually chose to invest.

Given the financial history of the company, Valsvig says he was amazed that so many still chose to invest, proving their belief in the company.

Bartos added, “One thing I can say about these guys, when push comes to shove, they’re here.”

“We proved them wrong,” Valsvig said. “We made money, literally, on day one. We have made money ever since.”

Dakota Foundry is not an S corporation, not an employee stock ownership plan, which lends much to the Foundry’s success, according to Valsvig.

“The fact that you have employees with invested interest in the company, they have skin in this,” Valsvig said. “They know their rewards are based on their efforts.”

Because the shareholders are also employees, there is potential for complications to arise, says Bartos who is VP/production manager.

“It’s a very fine line. When they walk through that door, they’re employees, but they’re also on the board of directors, so they’re my bosses too,” he said.

Recently, Bartos heard a story of how one of the employees was asked what he did for a living and he was able to state that he owned a company. “It’s that little bit of a bubbly feeling. You’re part of a company.”

The foundry has 43 employees, and Bartos says they could comfortably add five or six more.

Finding people with a technical background in the iron foundry industry who are willing to come to a rural area is one hardship the company still faces. They said their potential employees face the hardship of their spouses finding work in their careers here.

“We depend on other (area) businesses to succeed,” Valsvig said. “We’re no good alone.”

At the beginning of their venture, Bartos said he remembers being told, “You get one shot at something like this in your life,” he said. “There’s one thing you’ve got to keep in mind all the time … It can go as quickly as it came. You’ve always got to keep that in mind.”

Valsvig added, “As an employee who has interest involved, they have the company’s best interests (in mind). It’s a good thing, probably a very rare thing, but it works.”